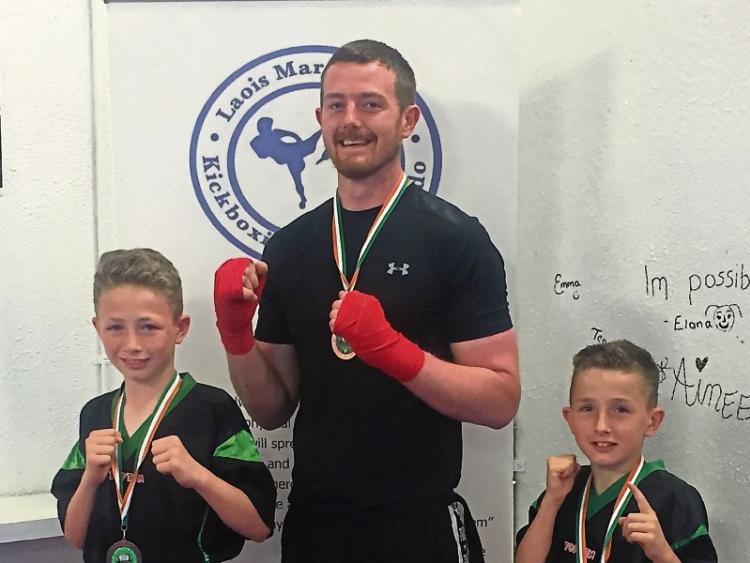 Laois Martial Arts have been busy competing, and over the past 3 months they have competed in three competitions alone.

April saw the Junior and Senior All-Irelands kicking off at Citywest. The event is one of the most exciting events on the Kickboxing calendar. For the Juniors we had the McGuirk brothers in action. Corey the defending Junior 2015 Champion and his older brother Byron.

Byron was first up for the club competing in the -42kg advanced section. Byron was unlucky to secure a medal on the day despite a great fight. Corey after a long wait was up next. He won all of his three fights on the day to secure his title for another year.

Coach Shane Culleton commented. “The key to victory at All-Ireland is fitness, movement and fitness. For Corey his three fights were in the space of 30 minutes. It takes a great athlete to be able to perform to his best in such a short period of time”

Late April saw Senior LMA fighter Barry Doyle was in action later for the busy Mountmellick based club. Despite only training for a year Barry was keen to have a good at the All Ireland's in Leixlip, Co Kildare.

Barry had two super fights on the day and was rewarded with a well deserved third place in his section. A great achievement considering the length of time training.

Moving on from Dublin saw the club makes its way to Cork to compete in the Munster Open. Four fighters made the trip on the day. First up for the club in her first completion was Ciara McParlan who has a terrific day coming second in her category.

Next up was Dylan Fallon who is making a comeback this year. Dylan secured third place on the day. Odhran Dunphy, was up next displaying his usual dynamic kicks on the mats, securing a well earned third place at the end of the day.

Finally for the club was Club Black Belt Chloe Shortall, who was also making her comeback to fighting. Chloe had three great fights on the day and won out her category after stopping two of her opponents with a well placed back kick and a turning kick to the head.

Coach Shane Culleton commented. “The fighters were super on the day. To make such a long trip to compete only shows how dedicated they are to their sport. They all done terrific on the day. Every competition the club is making a bigger impact. I couldn’t more proud of the fighters. They are an inspiration to me and a great representation of what hardwork, support and focus can do for any young person.

Next up for the busy club is the Tallaght Open in September and the Rumble in Citywest. A huge thank you to all who support our club, especially our Parish Priest Fr Michael Murphy and our Main sponsor Mr John Moloney of the Gaelic Bar.