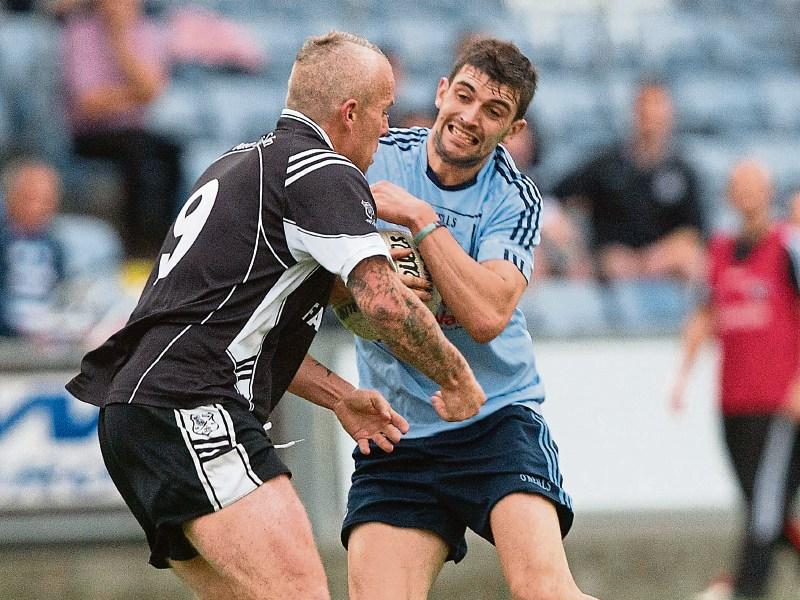 Arles-Killeen are through to the semi-finals of the Laois SFC once again, after overcoming a stern challenge from Ballyroan Abbey on Saturday night.

Sean O'Shea's goal in the 58th minute proved to be a winner, but Arles-Killeen needed a dramatic block on the goal line from Brendan O'Shea in injury time to assure them of the win.

The game began after an impeccably observed minute's silence for the late Danny Brennan, and it was Arles-Killeen who opened the scoring with a point from Shane Julian in the fourth minute.

Brendan O'Shea soon doubled their lead, as Ballyroan Abbey took their time to settle into proceedings. Their first signs of life came in the eighth minute, when they almost had a goal. A wonderful ball from MJ Tierney set Marty Scully through on goal, and he offloaded to Adam Brennan, whose shot was superbly saved by Mick Leigh.

They finally did get on the scoreboard when Scott Conroy tapped over a close-range free, before a remarkable spell in the game which saw four goals scored in six minutes.

The first two went to Arles-Killeen, or to be specific, Donie Kingston. The first owed to a mistake from Andrew Bonham which allowed Kingston to pounce on a loose ball and fist it to the net. A minute later, he was plucking a high ball from the air before bursting through on goal and slotting to the back of the net.

When Jason Enright added a free moments later Ballyroan Abbey looked like they were going to be overwhelmed, but they quickly got themselves back into the game with two goals of their own.

Adam Brennan was the architect of the first, as he brilliantly cut in from the left wing and got a shot off only to see it hit the crossbar. He wasn't disappointed for too long though, as Conor Brennan tapped home the rebound. Conor Keightley pointed in response for Killeen but Ballyroan Abbey were soon in again, as Scott Conroy expertly finished from 12 yards.

Arles-Killeen finished the half that bit stronger, thanks in part to two brilliant points from Donie Kingston, which came either eide of a similarly impressive effort from MJ Tierney. That left Killeen 2-6 to 2-2 ahead at the interval.

The second half was a bit of a slow burner, with the first score only coming in the 37th minute, from a Donie Kingston free. That sparked Ballyroan Abbey into life, and they hit two points through Liam Delaney and Ciaran Carroll to get within three.

Arles-Killeen responded, inevitably, through Donie Kingston, who pointed twice in three minutes, with Conor Keightly adding another. They now lead by six and seemed to be in cruise control, but Ballyroan Abbey weren't going to let them have it easy.

Liam Delaney hit his second of the half before frees from Scott Conroy and Tierney helped to get them back within a score, 2-10 to 2-7, with Arles-Killeen then losing James Mahon to a red card for a foul on Padraig McMahon.

They were building momentum now, and two brilliant scores, one each from Conroy and Padraig McMahon had them back to within one, with just two minutes left.

Arles-Killeen, knowing they needed to respond, duly did. Donie Brennan set Kingston away 60 yards out, and he surged forward before playing in Cathal Moran O'Brien. He in turn fed Sean O'Shea, who kept his cool to slot the ball into the bottom corner.

MJ Tierney got a point back for Ballyroan Abbey, but they needed a goal, and almost got it. A hopeful ball into the penalty area was won by Eoin Kearns, who passed off to sub Eoghan Whelan. His effort was headed for the bottom corner, only for Brendan O'Shea to get a foot to it, as Killeen held on.