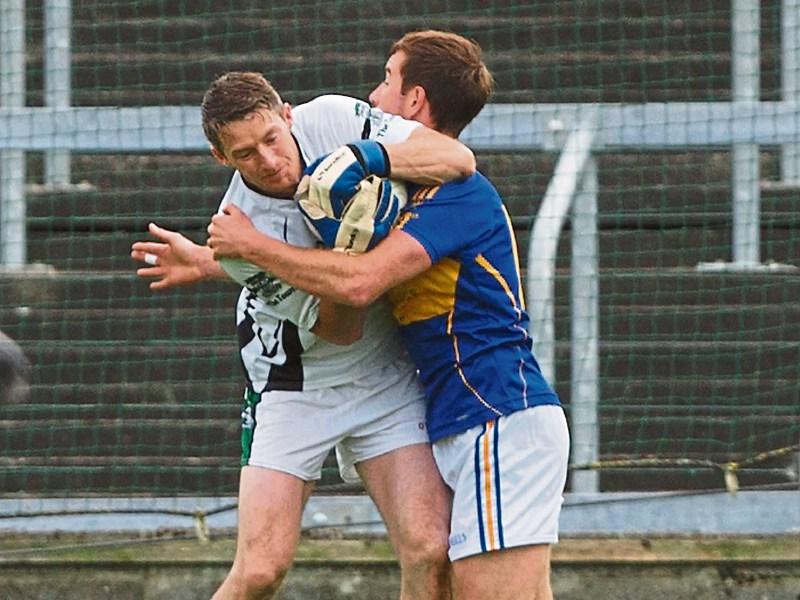 A sixty-second minute penalty from Conor Meredith proved enough to book O’Dempsey’s place in the county final as they fired an unanswered 1-3 at the death to stun The Town and progress to a final showdown with Timahoe.

O’Dempsey’s claimed the first score of the game with just two minutes on the clock as Brian Nugent converted the first free of the day to give his side an early lead. O’Dempsey’s doubled their lead three minutes later when Stephen O’Leary tapped over his twenty-one metre free as O’Dempsey’s enjoyed a good start to the game.

Portlaoise wasted no time in wiping the slate clean with points from Benny Carroll and Martin Staunton levelling the playing field inside two minutes. The sides went on to exchange points with Johnny Kelly and Michael Finlay pointing for O’Dempsey’s, while Shane Smyth and Liam McGovern both hit the target for The Town as the game remained stalemate with just under twenty minutes played.

O’Dempsey’s edged into the lead in the twenty-second minute through Barry Kelly’s composed finish, but that lead wasn’t to last long as Portlaoise claimed the opening goal of the day from the resulting kick-out, as Shane Smyth goaled from close range.

The half fizzled out with Mick Nolan and Liam McGovern hitting the target for Portlaoise, while Stephen O’Leary pulled one back to leave the half-time score at 1-6 to 0-6 in favour of Portlaoise.

Portlaoise reopened the scoring just three minutes after the restart through Jack Brown’s effort, before O’Dempsey’s went on to notch four points on the trot - three of which came from Stephen O’Leary, and the fourth from Robbie Kehoe.

Portlaoise hit-back in devastating fashion as they rattled the O’Dempsey’s net for the second time. Martin Staunton capitalised on a poor short kick-out as he turned inside onto his favoured left foot before rifling the ball into the top corner as Portlaoise went three clear once again.

With just the goal separating the sides, they went on to exchange scores as McGovern, Staunton, Kevin Fitzpatrick and substitute Aaron Rafter lifted the white flag for the Town, while O’Dempsey’s kept in touch with two converted frees from Nugent and Stephen O’Leary to keep the gap at five points with six minutes left to play.

O’Dempsey’s went on the attack and were duly rewarded with three points in five minutes from Conor Meredith, Stephen O’Leary and substitute Matthew Finlay to cut the deficit to just two points as the game entered injury time.

O’Dempsey’s needed a goal to keep their County final dream alive, and that goal came in the second minute of injury time. As O’Dempsey’s romped forward in search of that goal that eluded them all day, Johnny Kelly was dragged down just inside the square for a penalty.

Conor Meredith kept his cool and sent Mick Nolan the wrong way before rolling the ball into the corner of the net to push O’Dempsey’s into a one point lead and book their place in the county final.