Killeshin-Crettyard strike late to get the win 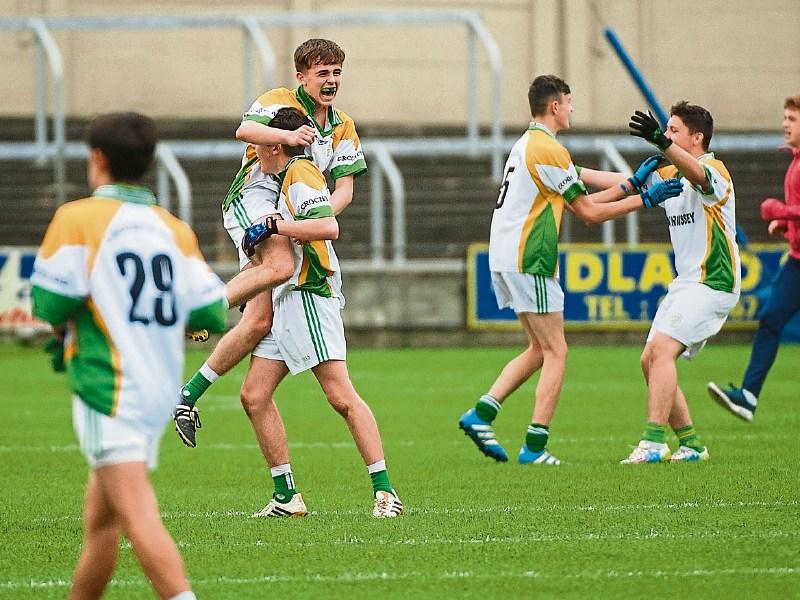 It may have been a scrappy and tense affair for most of the match, but Killeshin-Crettyard will not care, as they overcame a tough Sarsfields side to win the U-16 ‘B’ football championship.

With less than a minute gone, Callum Smith opened the scoring for Sarsfelds. A competitive next ten minutes or so followed, with both sides making a few mistakes, and struggling to keep hold of the ball. Sarsfields, however, added to their score with Allan Connolly pointing.

Killeshin-Crettyard shot right back to level the game, their scores coming at the hands of Conor Mulhall and Colin Dunne. Sarsfields then got the only goal, as Allan Connolly ran at the Killeshin-Crettyard defence, hand passed it to Callum Smith, and he finished well. However, four scores unmatched from Killeshin-Crettyard gave them a one point advantage at half time.

Four minutes into the second half, and midfielder Allan Connolly levelled the game for Sarsfields, with his second point of the game. Sarsfields would end up rueing missed goal chances, as Callum Smith had a golden chance for his second of the game, but his shot went wide and to the left.

A point from Colin Dunne restored Killeshin-Crettyard’s advantage, but this was cancelled out after a William Reilly point from a free. The sides remained level for a period of ten minutes, with both sides not wanting to lose the game. The substitutes rolled in, as both managers/selectors felt their side needed fresh legs to come up with the winning scores.