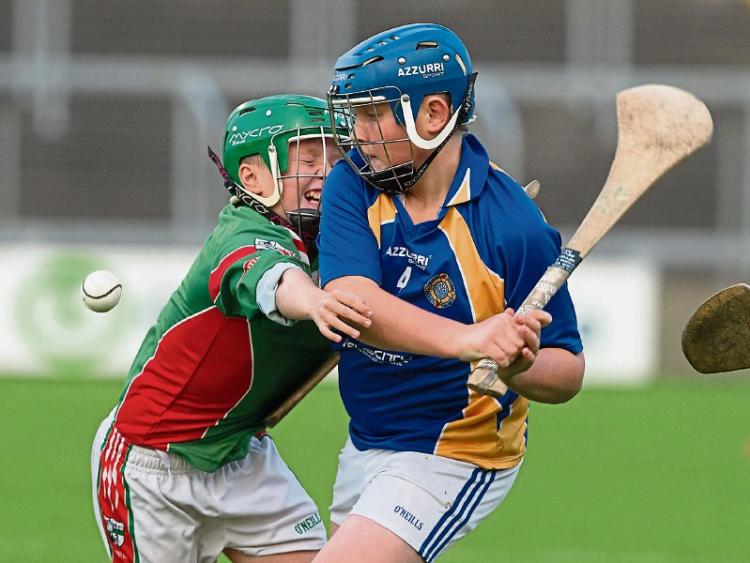 Clough-Ballacolla got off to the quicker start with three points without reply. Those scores came at the hands of Kevin Hyland, Kevin Meade and a free from Dara Fleming. However, Rathdowney-Errill were looking for goals it seemed, and after a few missed opportunities, they finally got their reward.

After a free was inaccurately placed by Aaron Hayes, Shane Bracken did superbly well to keep the ball in play. From there, Clough-Ballacolla goalkeeper Adam Shirley couldn’t control the ball, and Ben Galvin pounced on this error and levelled the game for Rathdowney-Errill. Clough-Ballacolla seemed undeterred by this though, and fired three points without reply, keeping them in control.

The sides traded further scores, to leave the scoreboard at Clough-Ballacolla 0-8, Rathdowney-Errill 1-2 at the interval.

Rathdowney-Errill seemed hungry for more goals in the second half, and went close with Shane Bracken shooting just wide of the target. The sides went back and forth for nearly ten minutes, with the two teams fighting hard to keep the other off the scoreboard.

Substitutes were being warmed up and rolled in to action, as both sides looked to their bench for the answers. Clough-Ballacolla were the first to score in the second half, with a Dara Fleming free being successfully converted. Rathdowney-Errill would come to rue their many missed goal chances, as they went close again, this time Darragh Davies the man failing to convert.

A point from Eimear Hassett brought one back for Rathdowney-Errill, but they needed goals now as we entered the closing stages of the match. Three points unreturned by Clough-Ballacolla effectively ended Rathdowney-Errill’s chances, with a Ger Fox goal coming too little, too late.