HOOBAN HEROICS WIN IT FOR CASTLETOWN 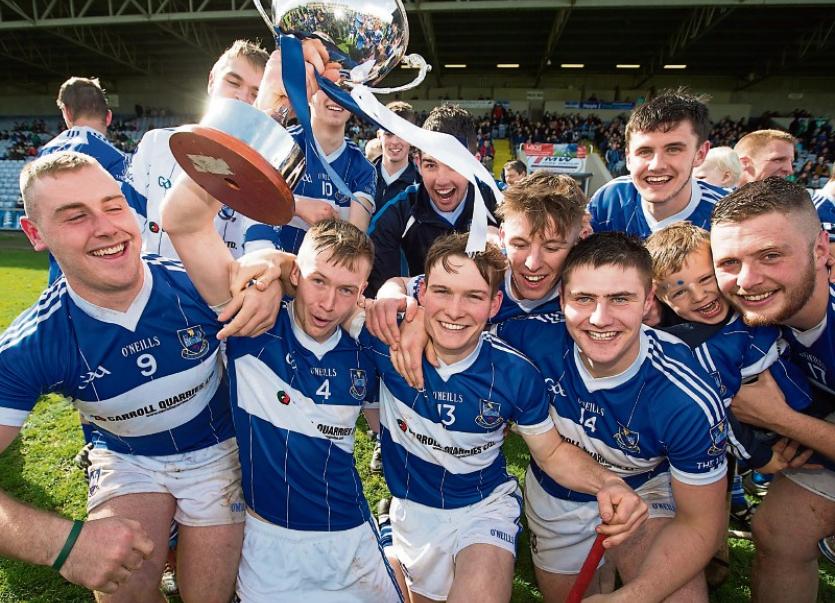 A dramatic injury time winner from James Hooban saw Castletown claim the SHC 'A' title with a one point win over Ballyfin Gaels on Sunday afternoon in O'Moore Park.

Hooban popped up with the winner with a little over 30 seconds left in the game, and Ballyfin Gaels were unable to fashion an equalizer after that, as Casltetown secured their return to senior ranks in the most remarkable fashion.

It was a climactic end to a game which was incredibly close throughout, and it was a bitterly disappointing way to lose for Ballyfin Gaels, who had done so well, for so long.

There was never more than a single score between the teams, and they were level on six separate occasions, but it was Castletown who managed to come up with the winner when it mattered most.

The opening minutes didn't bring much in the way of scores, but there was still plenty of action. Both teams looked to start strongly, but in the blustery conditions it wasn't easy. Castletown were playing into the teeth of wind in the first half and almost got a perfect start with Ben Reddin raced through on goal, but a brilliant hook from David Connolly denied him.

We had to wait until the sixth minute for an opening score, and it was Gareth Dunphy who provided it, as he rifled over the bar from 21 yards out. Three minutes later James Finn burst onto a pass from the left wing and fired it between the posts, as Ballyfin Gaels finally started to use the elements to their favour.

Castletown didn't open their account until the 13th minute, and it was Ben Reddin once again, as he managed to squeeze a shot between the posts from a tight angle.

Ballyfin Gaels wasted little time in restoring their two point lead, however, as Dunphy tapped over a free two minutes later. Again it was Castletown who came back at them, Dylan Conroy scoring from distance, but Ballyfin Gaels were responding quickly each time.

Again it was Dunphy who provided the score, as hit the target from way out on the left wing, just in front of Castletown dug out, with their manager Paul Cuddy protesting the ball had gone wide.

Either way, the score stood, and Castletown were two behind. A Dylan Conroy free got them within one, and then they worked a goal out of nothing. John Gaughan's 65 landed ten yards short of goal, and as the ball broke in the penalty area James Hooban was quickest to react, lashing a shot to the back of the net for a well-taken goal.

To Ballyfin Gaels credit, every time Castletown scored in the first half, they hit right back, and it was no different on this occasion. Donnchadh Hartnett got an excellent point from 35 yards, and then Gareth Dunphy slotted over an easy free, to see the teams level at the break, 0-6 to 1-3.

The second half opened with a brilliant point from way out on the right wing by Ryan Mullaney, and Dylan Conroy followed that up with a free moments later to push Castletown two clear.

Ballyfin Gaels eventually got themselves back into the game when the excellent Gareth Dunphy saw off a handful of defenders before pointing, and he then added a free soon after to level the scores at 1-5 to 0-8.

Castletown sub Gearoid Gaughan then took centre stage for the next couple of minutes, as he drilled over two frees to put Castletown back in front.

Again, Ballyfin Gaels were required to come back and that's exactly what they did, first through a well-taken score from Garry Hofmeister, as he managed to hit the target from a tight angle. Gareth Dunphy then won a free before dusting himself off and sending it sailing between the posts, and with 15 minutes to go, there was still no separating the teams, 1-7 to 0-10 the score.

Dylan Conroy punished a foul on Gearoid Gaughan to give Castletown the lead again, but the fighting spirit Ballyfin Gaels had shown all along came to the fore once more. Sean Lowry pointed a free from his own 65, before the irrepresible Dunphy won another free, which he duly pointed to put his side back in front for the first time since the 26th minute.

The good work to earn that lead was almost undone moments later, however, when James Hooban had sight at goal, but he didn't connect with the ball as he would have liked, and Dermot McGill managed to turn it out for a 65, with Dylan Conroy converted.

The game was down to it's final moments now, and another Dylan Conroy free edged Castletown in front, but less than a minute later, Gareth Dunphy showed nerves of steel to point another free to see the sides level at the end of normal time, with just a minute of injury time announced.

It was a case of 'next score wins' at this stage, and it was James Hooban who delivered for his side. Picking up a break 55 yards out, he darted into space and swung a shot over his left shoulder to claim a dramatic win for his side.