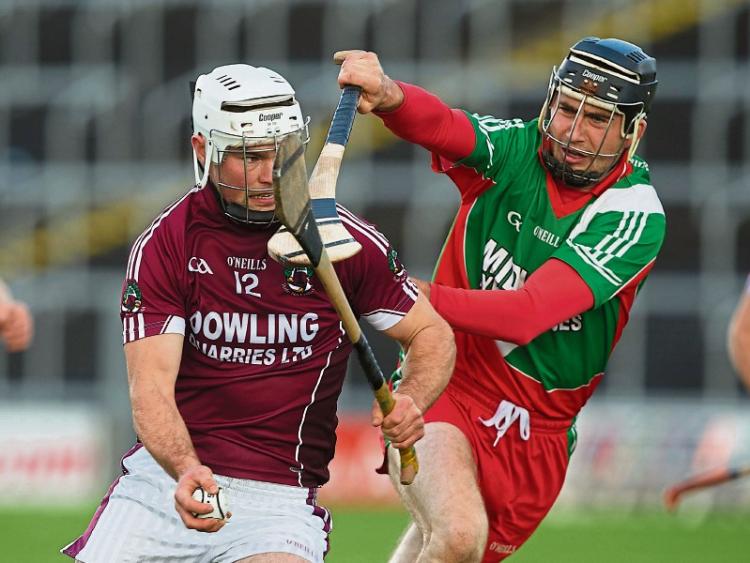 Daire Quinlan's injury time free booked Borris-Kilcotton's place in the Laois SHC final, after a dramatic finale to this semi-final clash on Sunday.

Quinlan's winning score came moments after Cha Dwyer had hauled Ballinakill Gaels level for the first time in the game. With the scores level and time almost up, Aaron Dunphy was racing through on goal when one of the chasing pack of Ballinakill defenders launched his hurl at him, and even though his shot for goal was saved, play was called back for a free, allowing Quinlan to hit the winner.

Borris-Kilcotton got off to a bright start, with PJ Scully, who missed the first game through illness, firing over a free in the third minute. With wind advantage, Borris-Kilcotton were looking to make a fast start, and the return of Scully certainly helped.

It was his quick thinking which lead to their second score soon after. As he lined up a free 25 yards out, he spotted an unmarked Joe Campion to his left and quickly found his team mate, with Campion hammering a shot to the net.

Scully added another free soon after before a fine score from the right by Daire Quinlan had Borris-Kilcotton 1-3 to no score up after ten minutes, with Ballinakill Gaels struggling to get a foothold in the game. Cha Dwyer finally got them on the scoreboard with a free, and that preceded a truly remarkable 30 seconds of action.

It started with a brilliant catch on the edge of the square by Daire Quinlan, who shook off his marker and powered a shot at goal. Paul Simms somehow got a hurl to it to keep it out, but the danger wasn't over. Ballinakill Gaels, in trying to clear their lines, worked the ball back to Simms, who was then dispossessed. The ball fell to Neil Foyle, but with no keeper in, and from a tight angle, his shot hit the post and went wide.

Borris-Kilcotton made light of those misses, as Aaron Dunphy and Joe Campion both pointed in quick succession to send them seven clear, 1-5 to 0-1.

Ballinakill Gaels needed to throw themselves a lifeline before half time if they were to have any chance, and they eventually did just that. Cha Dwyer and Eamon Jackman pointed a free each, with PJ Scully hitting back for Borris-Kilcotton. Ballinakill Gaels were building momentum though, and Cha hit three more points before the break to leave just the goal in it at half time, 1-6 to 0-6.

The second half was a bit of a slow burner, with both sides hitting a couple of wides apiece before a score was finally registered. Neil Foyle had a chance for a goal and his low shot fizzed across the goalmouth, before being turned out for a 65, with PJ Scully pointed.

Cha Dwyer set up TJ Lalor for Ballinakill Gaels to get their first point of the half, before Scully was forced off for Borris-Kilcotton. Seamus Dwyer responded for Ballinakill with a point from the left wing, but Joe Campion soon cancelled that out, as the goal remained between the sides ten minutes into the half.

Ballinakill needed to get a run of scores unanswered, and they finally hit two back-to-back when Cha and Seamus Dwyer got them within one, with ten minutes left in the game. Daire Quinlan pointed a free before Cha again pointed for Ballinakill, leaving one in it with time ticking away.

Quinlan had a chance to push his side two clear once more but mis-hit his free, and from the resulting puck out Cha won possession and pointed the equalizer. That set the stage for someone to make a hero of themselves, and Quinlan put the earlier miss out of his mind to tap over an effort from 25 yards out, as Borris-Kilcotton marched into the final.