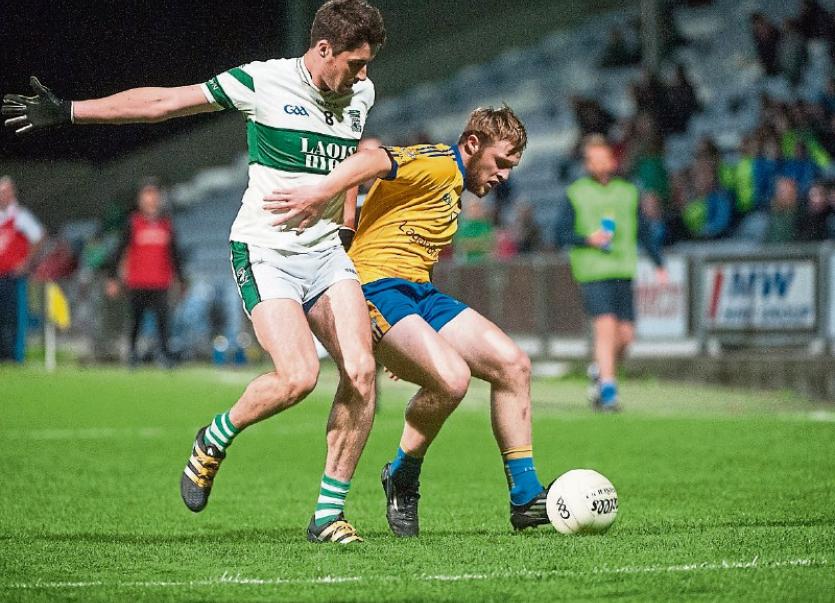 In what was a night of 'what could have been', Portlaoise’s second half display reminded all in O’Moore Park of exactly why they are on course for ten-in-a-row, as a dogged performance pulled them over the line against a wily St Joseph’s side.

One could be excused for underestimating this Portlaoise side as phone calls and chatter filled O’Moore Park at half-time as St Joseph’s, playing into a gale wind in the opening half, looked to have physically and tactically gotten the better of the Town.

There was a giddy atmosphere across the ground that all in attendance may be about to witness the end of an empire as St Joseph’s looked to be on course to derail Portlaoise’s ten-in-a-row bid - but, as they always do, Portlaoise dug deep and ground out the result.

Playing into a gale force wind in the opening half, St Joseph’s surprised all by claiming the opening score of the day. A quick-break forward afforded full-forward, Matty Campion, a one-on-one opportunity with the oncoming Portlaoise goalkeeper, Graham Brody, only for Campion to chip the ball over the bar for the first point of the day with just a minute on the clock.

At this point it was clear to see how St Joseph’s intended to counteract the wind - their tactic resemblant of Jim McGuinness’ Donegal side with fourteen, if not fifteen men behind the ball swarming the Portlaoise attack before breaking forward at pace.

That said, Portlaoise weren’t without their own chances as three shots sailed wide in the opening eight minutes before they opened their account when Craig Rogers steered his swinging effort between the uprights with nine minutes played.

St Joseph’s efforts paid dividend on the fourteen minute mark when Kevin Campion was fortunate to see the ball come through a ruck on the twenty-one, leaving him to round Brody in the Portlaoise goals before bundling the ball over the line for the first goal of the day.

Dan Dunne notched his second of the day, this time from much closer range as the wing-forward converted a twenty metre free to put five between the sides with twenty-two minutes played.

Three minutes later, a high, diagonal ball into the square from Mick Keogh was met by the boot of the oncoming James Kelly on the half-volley as the ball blazed over the Portlaoise crossbar to extend the Joseph’s lead to six points with five minutes left to play in the half.

The luck of the break certainly seemed to be falling St Joseph’s way as Portlaoise could only watch on as the usually clinically-accurate Paul Cahillane saw his three efforts, two forty-fives and one free, come back off the post each time.

Portlaoise closed out the half with two injury-time points from Gareth Dillon and Bruno McCormack to cut the deficit to four points going in at the interval on a scoreline of 1-4 to 0-3.

The giddiness that filled O’Moore Park at half-time quickly dispersed upon the restart as within eleven minutes Portlaoise were back on even terms. Four unanswered points, and a goal chance, put Joseph’s on the blackfoot.

Three points from Bruno McCormack, two of which came from frees, as well as a beautiful point from Brian Glynn wiped the slate clean as Portlaoise looked like they would only press on.

A second-yellow apiece to Paul Cotter and Matty Campion left referee Eddie Kinsella with no choice but to give them their marching orders with fifteen minutes to go. Unfazed by the preamble, Rogers slotted his second of the day three minutes later as The Town took the lead for the first time in the game.

Portlaoise’s resilience is rarely questioned, and they showed why as they rattled off four points in the dying minutes from Cahillane, Glynn, Dillon and Kieran Lillis as Portlaoise march on to the semi-final.