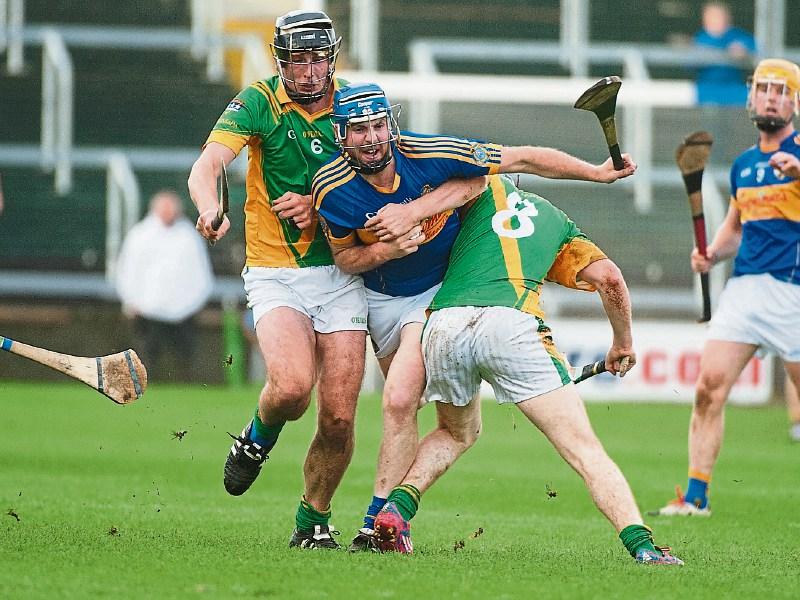 Clough-Ballacolla booked their place in the Intermediate County final following a ten point victory over Clonad in a hugely entertaining and high-scoring clash in O’Moore Park on Saturday last.

Clough-Ballacolla waited until the fifth minute of play to open the scoring with Ciaran Finane notching the first point of the day. From the resulting puck-out they capitalised once again as full-forward, Sean Corby, directed the high-ball into the square past Shane Cahill in the Clonad goals for the first green flag of the day.

Clonad settled themselves into the game with a goal of their own a minute later when Ray Killeen rifled the ball low past Tommy Nolan. Clough-Ballacolla doubled their lead through Ray Cummins’ point, but Clonad went on the attack and notched 1-4 in five minutes to take the lead.

Points from Seoirse Conroy and Paddy Norton paved the way for Micheal Kerr’s clinical goal with eleven minutes on the clock, before John Noonan and Seoirse Conroy split the posts to extend the Clonad lead to four points.

Clough-Ballacolla quickly set about reversing the scoreline as they claimed five points in a row over a ten minute period to re-take the lead. Points from Jordan Walshe (2), Aidan Doyle, Ray Cummins and Ciaran Finane pushed Clough-Ballacolla into a narrow one point lead with five minutes remaining in the opening half.

The half came to a close with Seoirse Conroy and substitute Bob Delaney pointing for Clonad, while Brian Corby (2), Walshe and Finane all hit the target once again as Ballacolla held a three point lead at the interval on a scoreline of 1-12 to 2-6.

Clonad emerged for the second half and wasted no time in reducing the deficit as Bob Delaney raised the white flag inside a minute of the restart, before reducing the gap to the minimum a minute later with his second in as many minutes.

Clough-Ballacolla claimed their second goal of the day shortly after as Ray Cummins made no mistake with the rebound from Pat McEvoy’s saved effort. Walshe (2), Doyle and Brian Corby exchanged points with Conroy and Kevin Bergin, before Clonad fired their third goal of the day when Bob Delaney pulled on the loose ball to send the ball into the top corner to leave three between the sides.

Ciaran Finane slotted his fourth of the day with fifteen minutes to go, before Ray Cummins’ grabbed his second goal of the day as he found himself in the right place at the right time to lift the green flag. John Doyle followed up with a point for the Ballacolla men, before Cummins turned hat-trick hero as he sunk his third of the day with six minutes to go.

With the result beyond doubt the sides closed out the game with points from Clonad’s Kevin Bergin (2) and Micheal Kerr, while Jordan Walshe fired a brace for the eventual winners as they ran out ten point victors.