Cross Country season gets up and running 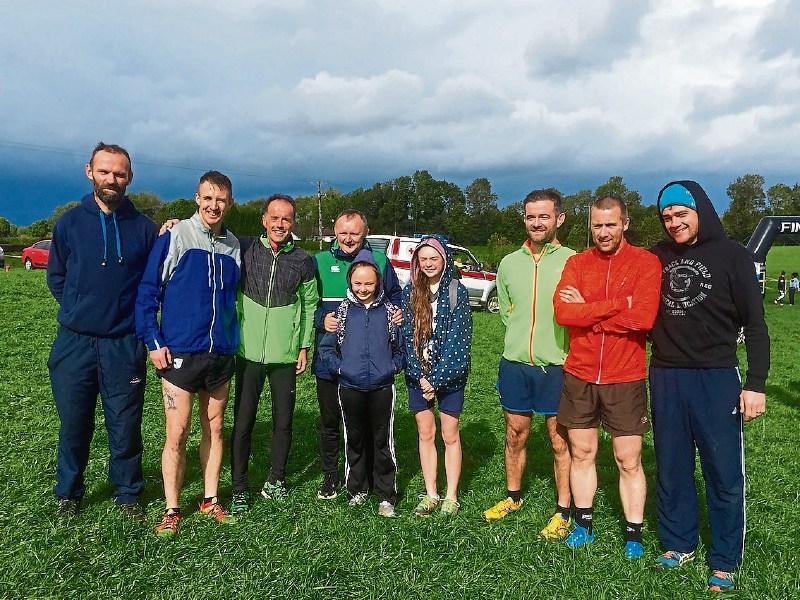 The sun shone with all its might for the start of the first day of the County Cross Country Championships hosted by Rosenallis-Kilcavan AC on the lands of Mr Brendan Peake at Graigue, Mountmellick.

It was a terrific venue for cross-country racing, and spectators could view the entire course from the tents and speakers which marked the headquarters for the event.

With some damp wet spots, and some testing climbs and fast downhill sections, the course had the makings for some great cross country action. Day 1 traditionally hosts the Novice and Even Ages Championships, and a decent crowd gathered for the start of the day’s events.

Action kicked off with two non-championship events for U-8s, and it was great to see the enthusiasm among these little athletes in the making as they raced their way around their course.

The U-10s had 800m to race over and the first juvenile championship medal of the cross country season went to Rachel Ayres of St Abban's who won the girls’ event. The boys’ race went to host club Rosenallis-Kilcavan AC’s Aaron Lawlor, so a great win for him on home turf.

The U-12s had 1,400m to contend with, and the weather conditions were slightly tougher for this event. There was a great race from the start for the podium positions, with Faye McEvoy (Ballyroan, Abbeyleix and District AC) running a very skilled and tactical race to take the lead inside the final 200m to take the county gold.

The boys’ race was won in confident style by Jack Fenlon from St Abbans. With a race distance of 2000m for the U-14s, the girls’ race was won in emphatic style by Niamh McDonald from Ballyroan, Abbeyleix and District AC, with Rosenallis-Kilcavan AC’s Ronan Hyland taking the boys’ race. The Fenlon family were in great spirits when Rebecca Fenlon (St Abban's AC) doubled up on her brother’s success in the Under 12s event by taking the gold in the U-16 girls’ race over 2,500m.

Oughaval’s Cathal Connaughton ran on very well to take the boys’ U-16 event over the same distance. As is usually the case, the participant numbers drop off quite dramatically as the age increases. Nevertheless, the commitment and competition among the participants thankfully does not drop off, and well done to St Abban's pair Maeve Maher, who won the Girls’ Under 18 race over 4,000m and to Cian Kelly who won the Boys’ Under 18 event over 5,000m, both athletes coping well with the windy conditions.

The clouds were looming at the Novice Women gathered at the start line, with 3K ahead of them. This the first cross country race for many, including Joanne Carroll from Portlaoise AC, who after duelling for the lead in the first lap, took the race by the horns and was the eventual victor, winning in fine style, from St Abbans duo Sinead Kelly and Mary Ellen Doyle.

In a bitter-sweet twist, this was Joanne’s first and only race as a Novice, as the first three over the line lose their novice status, and are ruled out of subsequent county novice XC events. The St Abban's women took the team gold, with Portlaoise in second, and St Abban's second team in third. Hopefully we will see all these women back for the Intermediate in a couple of week’s time.

As the women were finishing their race, the wind picked up and the heavens opened, and by the time the Novice men lined up for their 6K race, the winds and rain increased to biblical proportions as they set off into near horizontal rain!

The weather settled down after a time, and the race was led out by Colm Fitzgerald (Portlaoise AC) with Colin Coyne (St Abbans) in touch until about half way when Colm pulled clear. Colm was the comfortable winner, with Colin in second, and his St Abbans colleague Proctor Geoghegan.

The team medals went to St Abban's in first, Ballyroan, Abbeyleix and District AC in second, and Ballyfin AC in third.

The next Intermediate Cross Country Championships (and juvenile uneven ages) event will take place on Sunday October 9th in Abbeyleix and will be hosted by Ballyroan Abbeyleix and District AC. Hope to see you all there!