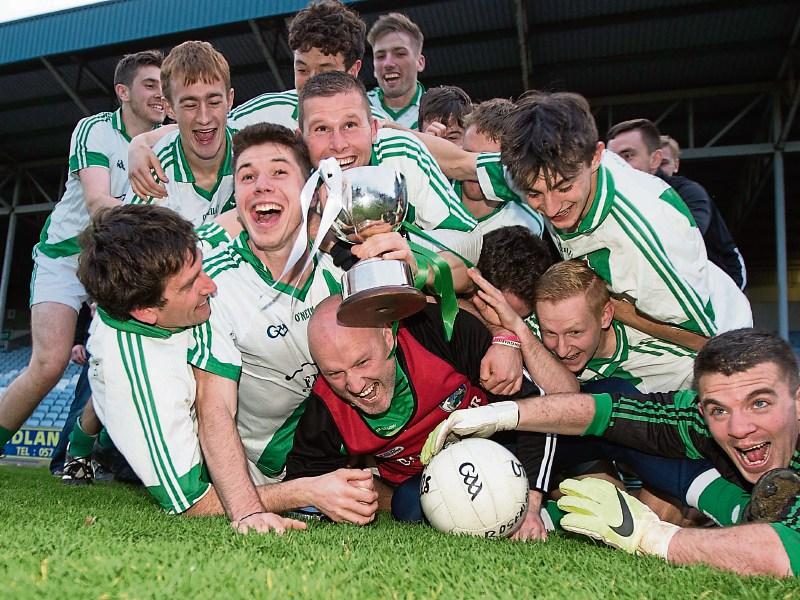 Rosenallis held on for a nervy one-point win in this gripping Laois JFC final on Sunday evening, as they just managed to hold off Park-Ratheniska.

In what was a closely fought game throughout, a Rosenallis penalty midway through the first half proved to be a vital score, as it helped them to remain slightly ahead for the majority of the game.

Park-Ratheniska got back to within one point of Rosenallis on three occasions in the secon d half, but they just couldn't haul themselves level, and Rosenallis hung on for the win.

Park-Ratheniska had made a bright start, as Richie Hitchcock pointed from the right wing in the second minute, and Kieran Delaney eventually doubled the lead four minutes later, as Rosenallis took their time to settle into the game. They finally opened their account in the seventh minute, when Brian Fitzpatrick pointed from the left wing.

The Park-Ratheniska response was swift, as Denis Cahill split the posts with a fine effort from 35 yards out. Rosenallis hit back through Mark Dunne, as he rounded off a team move with a point from close range, but a Kieran Delaney free left Park Ratheniska leading by double scores, 0-4 to 0-2, after the opening ten minutes.

Rosenallis were slight favourites coming into the game, and they finally started to show some of that potential after that, starting with a point from livewire corner-forward Joseph Shelley.

After that, James Jackson was fouled in the penalty area by Mark Delaney, and Clifford Ward pointed to the spot. Jackson took the kick himself, and despite slipping as he made contact with the ball, he managed to find the back of the net to give Rosenallis the lead. Kieran Delaney offered a quick riposte for Park-Ratheniska, as he pointed a free, but Colm Poole responded in kind for Rosenallis to restore their two point lead.

As half time approached, both teams managed one more point apiece, through Denis Cahill (free) and James Jackson, as Rosenallis lead by two at the break, 1-5 to 0-6.

The second half was a slow-burner, with no score in the opening five minutes. It ws Rosenallis who eventually broke the deadlock, Colm Poole's sweetly struck free edging them three clear.

Mark Dunne then got his second of the game as Rosenallis went four up, but Ratheniska came back strongly. Kieran Delaney pointed a free and Padraig Dunne added another from play, before a Sean Tynan point got them within one.

Ronan Murray and Bryan Flanagan traded scores to leave just one in it now as the game went into stoppage time. Park-Ratheniska were desperate for an equalizer, but Ronan Murray held his nerve to kick Rosenallis two clear, meaning Mark G Delany's late score was too little, too late.