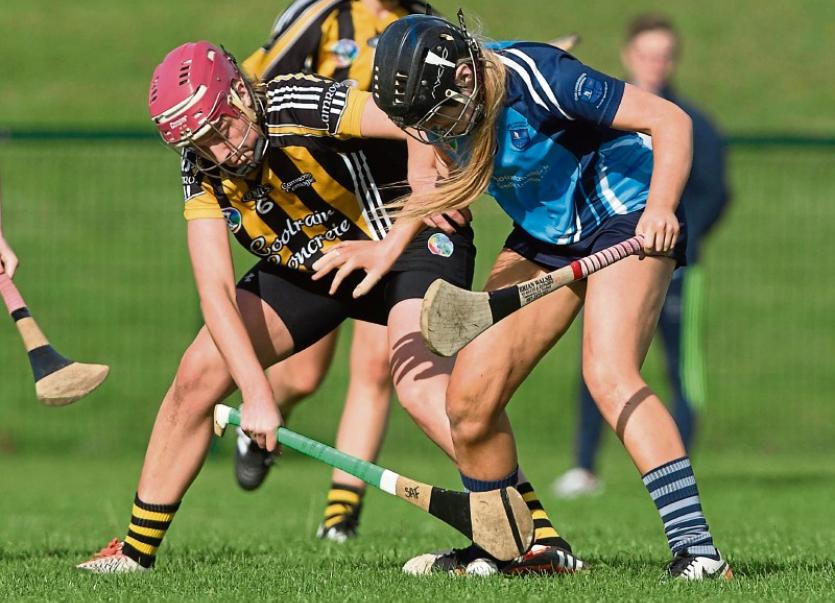 O’Moore’s claimed the Laois Senior Camogie Final in dramatic fashion on Sunday in Abbeyleix, with a stirring final ten minutes denying Camross’ bid for five county titles in a row.

Camross were first out of the blocks as they opened the scoring with just a minute on the clock when midfielder, Olga Parkinson, split the posts to give them an early lead. Two minutes later, Lizzy Ryan followed two minutes later with a great strike from the left wing to double their advantage and give the reigning champions a perfect start to the day.

O’Moore’s went on the attack from the resulting puck-out and cut the margin in half when Erin Murray converted her first free of the day to leave a point separating the sides in a busy opening four minutes.

A fifteen minute drought followed as these two evenly matched sides remained deadlocked, fighting tooth and nail for every inch of play. O’Moore’s broke the drought with nineteen minutes played when Erin Murray’s goal bound effort took a wicked deflection and was turned into the Camross net for the first goal of the day, pushing them into the lead for the first time in the game.

Camross narrowed the gap to two points with five minutes to go before the break when Niamh Dollard fired over a free as Camross looked to rally before the interval. O’Moore’s responded two minutes later with a steading point from Murray to ensure they entered the dressing room three points clear on a scoreline of 1-3 to 0-3 with the second half all to play for.

An invigorated Camross side emerged for the second half and quick set about dismantling the O’Moore’s lead. Seven minutes into the half Camross were awarded a free on the twenty-metre line and Sarah-Anne Fitzgerald made the journey up from her centre-back position to read over the ball, choosing wisely to take her point and chip away at the O’Moore’s lead.

Niamh Dollard followed up directly before, and after, the three-quarter way mark with a converted free from the twenty-one firstly and then trickier effort from beyond the forty-five as Camross wiped the slate clean and brought themselves level.

Introduced just four minutes previously, substitute Donnagh Mortimer made an instant impact as she slipped her marker before lifting the white flag to edge Camross back into the lead for the first time in almost thirty minutes.

Camross’ grip on the scoreboard for the second half looked set to continue when All-Ireland winning captain, Niamh Dollard, calmly slotted her fourth free of the afternoon to extend the Camross lead to two points as the game approached the final ten minutes of play.

Having been kept scoreless since the twenty-seventh minute of the first half, O’Moore’s broke their barren period four minutes shy of a full-half later when Erin Murray’s free sailed through the uprights - providing the catalyst for what was to follow.

With five minutes of normal time to go, Murray slotted her fifth and most important point of the day which brought the sides back on level terms. A minute later, Sarah-Anne Fitzgerald landed an inspirational long-range free to push O’Moore’s into ta narrow lead once again.

With fifty-nine minutes played O’Moore’s all but sealed the title when Joyce Dunne made the most important block of her career as Jennifer Moore attempted to clear her goal-line, before pouncing on the loose ball and kicking the sliotar into the net to put a four point margin between the sides with just additional time to be played.

Camross relentlessly searched for a way back in dying minutes, but had to settle for a consolation point from Sarah-Anne Fitzgerald as their bid for five County Championships in-a-row was scuppered by a deserving O’Moore’s side.