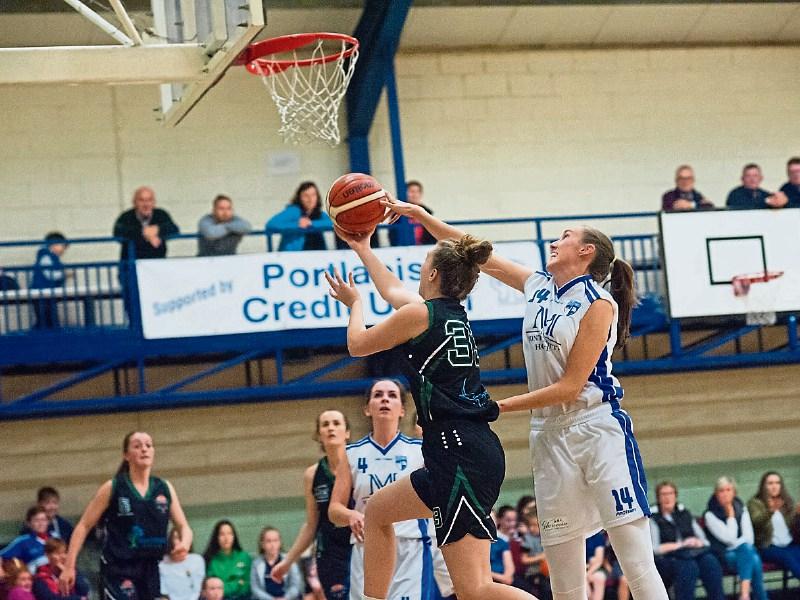 Having only narrowly avoided relegation from top tier basketball last season, Portlaoise Panthers were faced with the toughest of challenges in their opening game of the new season in facing the three-in-a-row National Cup champions, Glanmire.

With the addition of their new American, Necole Sterling, out of the Unniversity of Miami and Serbian coach Hunor Harkai, there was an air of anticipation for the season ahead wafting around a packed St Mary’s Hall on Saturday night.

However, Glanmire’s four Irish International players quickly reminded the Panther girls what the Superleague is all about as they raced into an early lead, helped by eleven points from Grainne Dwyer, their star post player.

They gave an exhibition of fast break play as they capitalised on early turnovers from the Panthers and punished them where it matters most, the scoreboard. Portlaoise kept chipping away offensively and the capitalised on their strength inside as Necole Sterling and Claire Melia exerted their dominance, accounting for the Panthers’ first nine points of the game.

In what was a huge blow for the Panthers, after making a fantastic move under the board, Claire Melia got caught up with a Glanmire defender and suffered an ankle injury that would keep her out for the remainder of the game. Following their introduction from the bench, Catherine O’Sullivan hit a much needed three pointer and Deirdre Tomlinson kept Portlaoise in touch with a fine lay-up on the buzzer to mark the end of the quarter which finished 28-14.

With all the work to do in the second quarter, to their credit, Portlaoise were visibly more settled and showed patience on the offensive end. Catherine O’Sullivan began the quarter as she had ended the last with an excellent three pointer which gave a much needed boost to her teammates.

Necole Sterling displayed her versatility on the offensive end; her ability to pull up for jumpers and power to the board left her defender in a daze as she notched up a personal tally of eight points in the quarter. The struggle continued on the defensive end for the Panthers however as Glanmire continued to execute their fast breaks superbly. The deficit was reduced following this quarter as the home side went in nine points down.

The third quarter was an exhilarating, high scoring affair as both teams went toe-to-toe and traded scores. The home team threw everything at the reigning champions and showed that they could match them in every aspect of the game. Up and coming star of the future, Maeve Phelan, was unfazed by the opponents as she stepped up offensively to hit five points on the trot. Maeve O’Sullivan contributed nine points to the teams tally with two shot clock buzzer beating three pointers.

Sinead Melia’s defensive efforts on Grainne Dwyer couldn’t go unnoticed as she frustrated the Irish International and forced her into some very difficult shots. Glanmire’s full court press put serious pressure on the Panthers guards however and they ran in some easy lay-ups which really was the final nail in the coffin for the Panthers team, who had thrown everything into trying to reduce the gap. Instead, the visitors had extended their lead to 14 points.

The fourth quarter saw some tired Panther legs take their place on the bench as Sarah Phelan, Sinead Nihil and Aisling Hayden tried to make an impact for the home side. Some excellent link up play between Sterling and Hayden saw Aisling clinch her first basket in a Panthers jersey following her transfer from Carlow IT.

Despite some more baskets from Sterling and some excellent rebounding from Nihil, Glanmire showed no signs of relinquishing the lead they had gained in the first quarter and they ran out overall winners on a scoreline of 82-59.

The loss of Melia was definitely a huge blow and it was always a tough task to face such a strong and successful team in the season opener but the Panther girls have many positives to take from this game. If they can perform to their potential for the full four quarters of a game, there is no doubt that they can compete with any team in the Superleague this season and should have a playoff spot firmly in their sights.