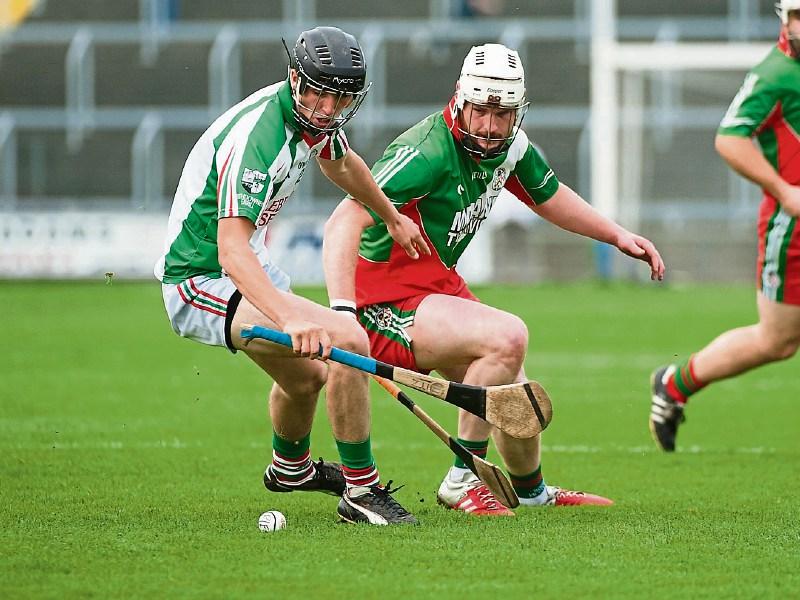 Rathdowney-Errill and Borris-Kilcotton will do battle again after an incredible county final saw them level at full time with 2-26 apiece.

56 scores in a 60-minute game of hurling is nothing sort of incredible in a match that was nip and tuck from start to finish.

The teams went in level at half time 2-14 to 1-17. In a game that defending seemed to take a back seat Borris-Kilcotton were 2 points up before the first goal of the game was scored by John Purcell after a great run and shot by brother Paddy was saved Purcell was on hand to sweep in the rebound.

Borris-Kilcotton responded well levelling it before county start Neil Foyle struck to put them three points ahead. Foyle did well to control a PJ Skully free that dropped short before firing to the back of the net.

This gave Borris-Kilcotton a 4-point lead but keeping with the tone of the day Rathdowney-Errill battled back well, eventually levelling it at 1-10 a piece thanks to a Tadgh Dowling point with still just 18 minutes on the clock.

Both sides then traded points before a Skully free put Borris-Kilcotton two points up. Then a scrap on the Borris-Kilcotton 14-metre line saw the ball handed out to Liam O’ Connell who took his chance brilliantly to put Rathdowney-Errill a point up.

Another flurry of points saw the sides go in at half time level after as good a half of hurling you’re likely ever to see.

Borris-Kilcotton came out of the blocks the fastest at the start of the second half with 4 answered points, Paddy Whealan opened the scoring before 3 frees from Skully stretched their lead.

Soon after Foyle grabbed his second goal of the game after reacting fastest to a breaking ball Foyle sped in one on one before finishing immaculately to the bottom corner.

Many would of expected Borris-Kilcotton to drive on from here and close the game out. They now had a 5 point lead the biggest of the match with the score 2-21 to 2-16

But Rathdowney-Errill haven’t won every second final since 2006 without having a never say die attitude and they battled back with their two best players on the day Ross King and Tadgh Dowling scoring some brilliant points. Dowling in particular with two outrageous points from the sideline.

However, there was one more twist to come King pointed a free for Rathdowney-Errill and that looked to be it with the Borris-Kilcotton managment even embracing on the sideline but the referee allowed one last puck out and up stepped King to rescue a draw for Rathdowney-Errill.

The teams will have to do battle again and Borris-Kilcotton may feel aggrieved they couldn’t hold on but after today’s match neutrals will be delighted that they get to witness a sequel.