Portlaoise set for tenth SFC title in a row 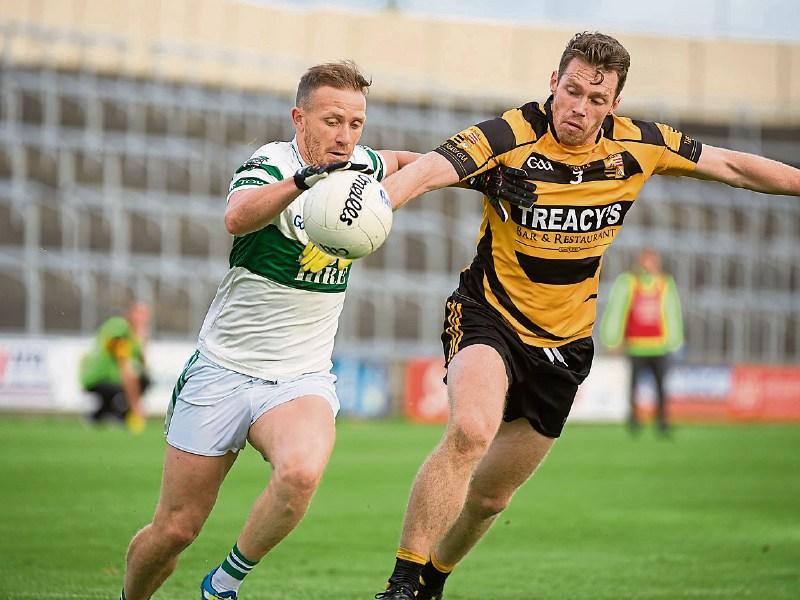 For the fifth time in Laois SFC history, Stradbally and Portlaoise will meet in the final of the competition, as the teams get ready to square off this Sunday in O'Moore Park.

It seems remarkable that the two most successful clubs in Laois SFC history have not met in the final more often, but their supporters will be afforded the rare treat this weekend.

Portlaoise, inevitably, enter the game as the hottest of favourites, a situation they are more than comfortable with as they attempt to win a tenth Laois SFC title in a row. They haven't been at their vintage best this year, but they have had a some tough games throughout this campaign, and still overcome whatever challenges were placed in front of them.

When you look back at their route to the final, you can appreciate how difficult it has been. Their opening game, against The Heath, could have been a potential banana-skin, but they turned in a dominant second half diplay, holding the current league champions scoreless after half time, while running out 2-12 to 0-6 winners.

They followed that up with a solid win over Arles-Killeen, before St Joseph's almost registered the biggest shock in the SFC in recent years in the quarter-finals, forcing a replay, which Portlaoise eventually won. Then, it was another date with Arles-Killeen, and another workmanlike performance and victory.

When you look back at those games, the opposition has been quite difficult - current league champions, beaten league finalists and, outside of Portlaoise themselves, the most consistent team in the SFC over the last five years. They will be in good stead for the final if nothing else.

Stradbally, on the other hand, have not had it as difficult, and their results would point to that. They have won their games by an average of almost 14 points per game, and while they can only beat what is in front of them, the worry has to be that they are yet to be really challenged in the competition.

There is no greater challenge ahead of them now than Portlaoise, and as Martin Murphy tries to plot their downfall, he has at least been offered something approaching a blueprint by St Joseph's.

They showed a lot of patience and bravery in their two games against Portlaoise, but their tactic of flooding players back and breaking forward at pace paid a lot of dividends. Matthew Campion had to plough a lonely furrow up front on his own, but they had enough mobility around the middle third of the field to make the gameplan work. It brought them to the cusp of a famous win but, crucially, didn't get them over the line.

In both games Portlaoise shook themselves into life when they looked in trouble, spectacularly so in the replay, and that is why beating them is so difficult. For anyone trying to achieve it, they know they will have to play to their maximum for the hour, while Portlaoise can keep themselves in a game without overly extending themselves, and 20 minutes or so of them at their best can be enough to finish teams off.

They haven't started games well this year, and that is something Stradbally will have to look at. Getting a good start is vital, and if they can get ahead early on it gives them something to hold on to. Like St Joseph's, they have a lot of mobility around the field which could cause Portlaoise problems, but they can't afford too many mistakes.

With Zach Tuohy rumoured to be available for this Sunday's game it is a further boon for Portlaoise, and you only have to look at the impact he made in last year's final with Emo to see how important he can be. Portlaoise were in real trouble until he was sprung from the bench and hauled them back into the game.

Even in his absence, Portlaoise still have a strong panel, and with their intermediates reaching the IFC semi-final, it will have meant good numbers in training and plenty of competition for places. Ricky Maher, Eoghan Whelan, John Delaney and the experience of Kevin Fitzpatrick are all good options to fall back on, but their strength is in the starting team.

Bruno McCormack has been as brilliant as ever in attack, hitting 1-14 from play so far. Paul Cahillane invariably comes up with some crucial scores, while Craig Rogers has been solid, if not at his usual best. At the back, Cahir Healy, David Seale and Paul Cotter will be detailed to nuillify Stradbally's most potent threats, so options are certainly not lacking for Malachy McNulty.

Stradbally's defence has impressive so far, conceding just under nine points per game, but they won't have been under the same kind of scrutiny that Portlaoise will subject them to on Sunday.

Up front, Colm Kelly and Jody Dillon have provided a lot of scores, but they key for them could be getting Gary Comerford on the ball. In the semi-final win over Crettyard Gaels, when he did drop deep and pick up the ball, he played some brilliant passes forward, and his vision and accuracy will be needed if they want to pick their way through the Portlaoise defence.

This year more than any, Portlaoise have looked vulnerable to an upset, but every time they have been under the cosh, they have come up with a winning performance. It's hard not to see them doing the same again this weekend, and while Stradbally have the tools to cause them problems, it is hard to back against this Portlaoise team not making it ten in a row.

The suspicion other clubs have had about Portlaoise for a while now is that the Leinster championship was their ultimate goal every year, and that they were taking the Laois SFC somewhat for granted.

If that was true, the drawn final against Emo will have changed their perception of the Laois SFC for a long time. As the SFC approached The Heath looked like emerging as their main contenders for the title, but Portlaoise did a lot of homework on their neighbours, and that showed on the day.

They have had difficult games ever since, but their incredible success to date shows no signs of abating. They are finishing games strongly and that's another aspect of their game that Stradbally will have to take into account.

They will have their homework done on Stradbally for the final as well, and will know all about their quality, having lost to them in the league earlier in the year.

When you boil it all down, however, and even after you take into consideration all the factors which could go Stradbally's way, it is hard to look beyond a Portlaoise victory. They have been the most dominant team in Laois SFC history and, while they have found the going tough this year, there still isn't enough to suggest their time as champions is about to come to an end.

Stradbally will cause them problems on Sunday, of that there is little doubt, but this Portlaoise side have always come up with a response so far. They have that great ability to almost manage themselves on the field, and when things get difficult on Sunday, they should be able to work their way out of it.

For that reason, they should be collect title number 33 this Sunday evening.