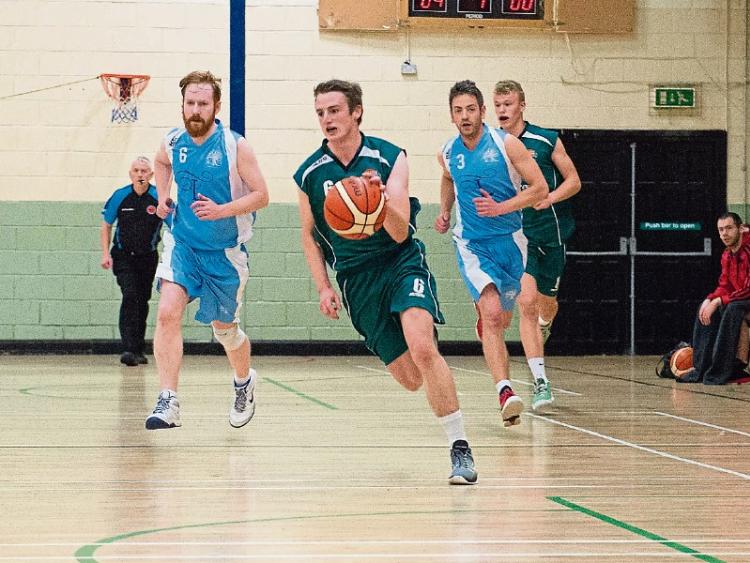 From the very first possession the home side dominated proceedings as Dragons couldn’t come get to grips with Panthers full court pressure throughout. Portlaoise put up massive numbers throughout as all nine players fight for time on the floor under new coach Hunor Harkai.

Baskets off turnovers were in abundance early on with Jack Scully, Kyle Burke and Liam Kinsella getting out on the break. Shane San Agustin caught fire early on with back-to-back three pointers in his first senior Midland League game for the Panthers.

Mullingar worked the ball around on offence and got baskets inside from their two big men Campbell and Osis. But turnovers killed them throughout as Portlaoise extended the lead through a three pointer from O’Sullivan and further scores from Peter Duignan inside the key and from the line. The score at the end of the quarter was 24-6 in favour of the home side.

Portlaoise piled on the pressure further in the second quarter putting up a big score to put the game beyond the Dragons. Seven Portlaoise players got on the scoresheet in the quarter showing the depth in the squad, again San Agustin standing out with a further two three pointers from deep.

Another highlight of the quarter saw Kyle Burke get out on the break to finish off with his first game dunk for the Panthers. Dragons battled on and continued to go inside with Osis getting a further six points to add to his personal tally. Benny Carroll got his just rewards from is constant pressure scoring three lay-ups in the quarter to give his side a 56-21 lead at the break.

Jack Dooley got in on the scoring early in the third quarter hitting a lovely three pointer from deep followed by a nice move to the basket. Carroll followed this up with five points of his own and Portlaoise continued to dominate. Craig Scully added baskets inside picking up offensive rebounds and finishing well under the rim. A pair of three from Liam Kinsella and Peter O’Sullivan finished the scoring in the quarter.

The final quarter was the most competitive of the game with Dragons finishing strong. Mel Mc Ger continued to pull the strings for Mullingar and also found his range from deep hitting eight points in a row for his side.

But Portlaoise always seemed to have an answer and continued to push towards the hundred milestone eventually hitting the mark with over three minutes to go, Kyle Burke getting the basket under the board. Shane San Agustin and Peter Duignan rounded off the scoring which saw seven Portlaoise players finish on double digits. Panthers will be aware that tougher challenges are ahead but couldn’t have dreamed of a better start to the season.