Quinn and Lupton make it a double for Portlaoise AC 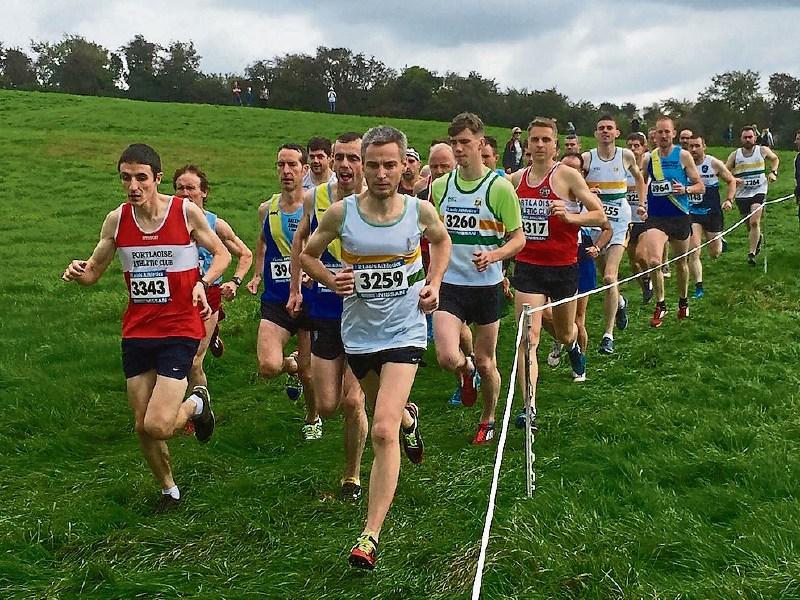 It was a lovely morning for the second day of the County Cross Country Championships hosted by Ballyroan Abbeyleix and District AC on the Carlow Road in Abbeyleix.

The weather was dry and mild, and there was little or no wind, so there were plenty of happy athletes and spectators.

The ground conditions were perfect, and with several undulations to contend with, including a killer hill for the older athletes, there was some great cross-country action in the many races held.

The juvenile athletes were categorised this time by uneven age categories, starting at U-9s and all the way up to U-19s. So with plenty of events to get through, race starter Joe Walsh was keen and eager to get things off on time!

The U-9s boys and girls had 600m to race over, and there were large fields in both of these races. The girls’ race went to Emma Jane Cuddy from Portlaoise AC who took up the lead early and stayed there to win in great style.

The boys’ race went to her clubmate (and cousin) Fionn Cuddy who, after a mix up in the entries ran really well to come second behind an U-11 boy, took a well-deserved gold medal shortly afterwards.

The U-11s had 1,000m to contend with, and St Abban's AC athlete Mia Brennan won the girls race, and Rosenallis-Kilcavan’s Aaron Lawlor won the boys race. The U-13s raced over 1,600m and this was a great race to watch with a few minor position changes, however Seoige English (St Abban's AC) leading from early on held on well to take first place.

Another St Abban's athlete ran well in the boys’ race when Jack Fenlon had to fight all the way to take a gold in his event, and again a great double up on his gold from last time out.

The U-15s had to run 2,500m on a different course, which included a whopper of a hill midway in their race. It proved no problem, however, for the girls’ winner Sarah Delaney from host club Ballyroan, Abbeyleix & District AC. The boys’ event went to Ronan Hyland from Rosenallis-Kilcavan AC, winning another gold medal to go with his gold medal from two weeks ago in the U-14s event. Great running Ronan – not too many dual gold county medallists in the same year!

With a race distance of 3,500m for the U-17s, Cara Maher from St Abban's was the winner of the girls’ race, and Cian Kelly, also doubling up on his gold from two weeks ago, took the boys race. The U-19 boys’ race was run over the 6000m, with Cathal Grennan running his first race for new club St Michael’s AC winning in emphatic fashion! The U-19 girls had 4000m to overcome, and ran their race in conjunction with the Intermediate Women; and Avril Deegan from Ballyroan, Abbeyleix and District AC was the runaway winner of this race.

Thankfully the weather stayed fine all day, and spectators could enjoy some teas, coffees and homemade snacks, which were supplied by the host club.

The Intermediate Women’s race was over 4,000m, and the winner of the Novice from two weeks ago Joanne Carroll (Portlaoise AC) lined up alongside some familiar faces and some new athletes. The race was taken up by Portlaoise AC athlete Niamh Quinn, and this was Niamh’s first time at the Intermediate grade….and her last!

Niamh led this race from start to finish, with Joanne Carroll coming second and Mary Ellen Doyle from St Abban's taking a second county bronze medal in two weeks. The team medals went to Portlaoise in gold position, St Abban's in silver, and Ballyroan, Abbeyleix and District AC in bronze.

As the women were finishing their race, the Intermediate Men lined up for their race, and had five laps of this testing circuit to complete. This was a very exciting race from the off, and after one lap there were five men in the leading group. After another lap this was down to three runners – the Novice winner Colm Fitzpatrick from Portlaoise AC, Tom Lupton also from Portlaoise AC and Liam Byrne from Ballyroan Abbeyleix and District AC.

These three battled away for the remainder of the race, with some position changes from time to time. With about 600m to go, Tom powered ahead of Colm, and created a decent gap. Inside the final 300m, Liam went ahead of Colm, and as hard as Colm tried he could not keep with Liam. The places were decided, with Tom coming first, Liam second, and Colm third. The team medals went to Portlaoise AC in first place, St Abbans AC in second and Ballyroan, Abbeyleix and District AC in third.

The next county cross country event will take place on November 6th when the Masters, Junior and Development athletes will have their turn on the cross country course which will be at Emo Court and hosted by Emo-Rath AC.

This is one of the most scenic locations around for a cross-country event, don’t miss it!