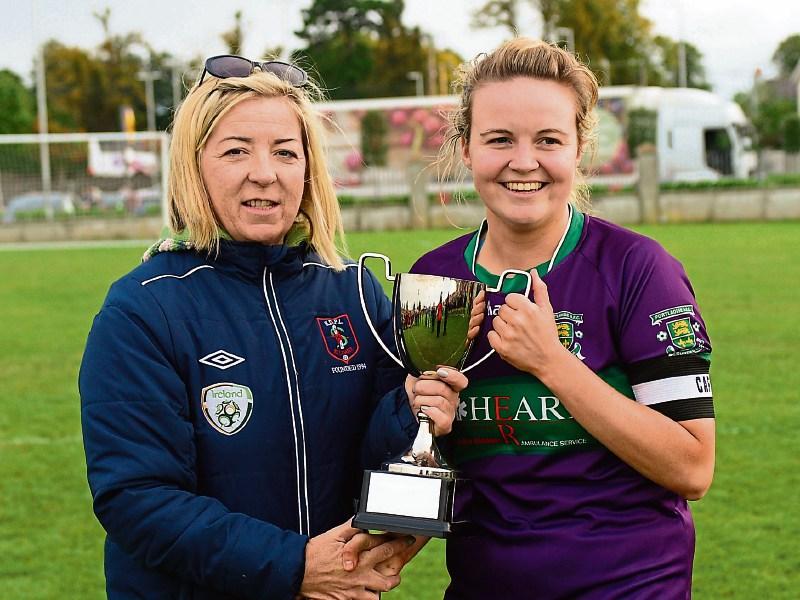 From the tip off you could see that both teams were pumped up for the game, although it was Portlaoise who were the brighter, breaking down play in the centre of the field and feeding some great passes up to the strikers.

It wasn't long before a ball was sent out to centre back Bernie Bowe, who was on the left wing, after taking a corner Jenny Conroy. Bowe then sent a cross into the box where Colleen Rickard was waiting, as the ball bounced over the heads of the Edenderry defence and Rickard headed home to put Portlaoise up 1-0 after 10 minutes.

Edenderry, from the tip-off, looked to even the score when Mary Buggle and Abbi Stafford combined to send the ball to Niamh Farrell, but she was denied by Portlaoise centre-back Bernie Bowe who cleared the ball back out of danger.

It wasn't long before Portlaoise put another one on the scoreboard when Jenny Conroy picked up the ball in midfield and sent a well timed pass out to Jenny O' Neill on the right wing, who then struck a high ball in to Mo Nerney. Nerney brought the ball down, dummied right and struck on her left, sending the ball through the keepers legs making it 2-0.

Portlaoise didn't let the foot off the peddle, when Mary Buggle and Niamh Farrell in the centre teamed up well with some fine passes play was stopped short by Ellen Healy, as she intercepted a pass and took a run forward. Seeing Colleen Rickard in space, she laid a tidy pass through the Edenderry defense where Rickard ran on to it, crossing in to Nerney who blasted the ball into the back of the net giving keeper Avril Stafford no chance making it 3-0.

Stafford made some superb saves and was unlucky not to deny Portlaoise their fourth goal when a corner glided into the box, Healy struck only to be denied by the quick hands of Stafford, the rebound fell to Conroy who was also denied but Jenny O'Neill struck gold on the third attempt making it 4-0 to the Portlaoise ladies and this was how it stayed up until the break.

Edenderry never gave up and came out into the second half determined to make an impact on the scoreline. Portlaoise tipped off and it was end-to-end play, the intensity of the game never dropped. Abbi Stafford was brought down just outside the box and it was Buggle who stepped up to take the free, Buggle cleared the wall with a swift strike but again it was Bernie Bowe who cleared the ball with a header.

From that clearance by Bowe, her centre back partner Aisling Kehoe pick up the ball and took a run up the wing passing down the wing to O'Neill who again crossed in to the box. Ellen Healy ran onto the ball and struck home making it 5-0.

It was Niamh Hyland who denied the oncoming Abbi Stafford again from the tip off, she cleared out to Healy who saw O'Neill taking off on a run down the wing, she passed up through the break in defense and it looked like Rickard was going to intercept, but O'Neill claimed the ball and dribbled into the box and fired a shot into the back of the net making it 6-0.

Edenderry from the tip off put major pressure on the Portlaoise defense, and although they were denied on a number of occasions Edenderry caught a break when Abbi Stafford sent a ball in to Niamh Farrell who split the defense and shot home past keeper Ciamh Dollard, making it 6-1 on the 80th minute.

On the 86th minute Mo Nerney intercepted the ball from a kick out and fed a ball up the line to Catherine Delaney who rattled the crossbar, but the ball fell to Nerney who was denied by the keeper sending the ball out for a corner.

Bowe sent in a low pass to Jenny Conroy at the front post who flicked the ball under her legs into Colleen Rickard in the centre of the box, and she made no mistake in finishing, making it 7-1 the Portlaoise ladies.

Edenderry fought to the end, and were denied from a free following a clearance from Maria Keane. This was how the match finished, a highly entertaining game with some great displays of football from both sides. Portlaoise ladies have won silverware on five occasions over the past three years and this was their first time to win the cup, a great way to finish off the season.