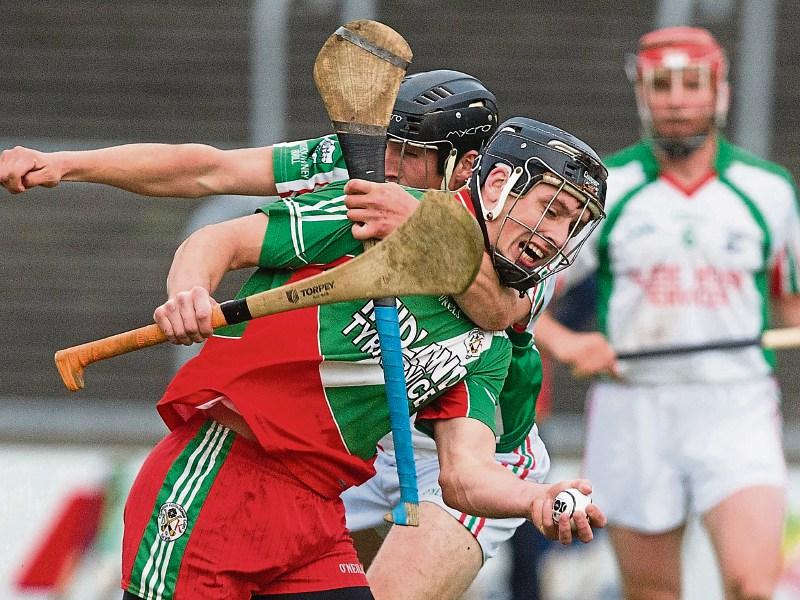 Borris-Kilcotton made history on Sunday evening at O'Moore Park, as they claimed their first ever Laois SHC title thanks to this five point win over Rathdowney-Errill.

After the epic drawn game, there was huge anticipation around the county for this game, as could be seen by the massive crowd which flooded into O'Moore Park. It was unlikely the replay would match the quality of that drawn game, but it was still an enthralling encounter from the first minute to the last.

Neil Foyle's goal in the first minute got Borris-Kilcotton off to a dream start, and they never trailed at any stage in the game. On three occasions, Rathdowney-Errill drew themselves level, but it failed to elicit anything in the way of panic from the Borris-Kilcotton team. They played like a team that was marching to their destiny, and they weren't going to let anything break their stride.

It has been a very hard-earned title for them, considering they have had three replays en route to the success. They improved as the championship progressed, and maybe those replays were for the better, as it strengthened their resolve and gave them more time playing together.

PJ Scully again defied medical advice to line out at corner-forward. He finished the game with 0-12, all from frees, as his accuracy and nerve under pressure in the second half were impeccable. Their defence tightened things up considerably from the drawn game as well, conceding just 2-3 from play here, compared to 2-17 the first day. They were full value for the victory, and to come back after the disappointment of losing a two point lead in the drawn game to win by five here is a fantastic achievement.

For Rathdowney-Errill, they will be left to wonder on what might have been. In truth, they spent most of the two games chasing after Borris-Kilcotton, and they eventually found themselves with too much to do.

Their remarkable run of winning the Laois SHC title every second year is over, but they won't be going anywhere. They will be left to rue a mis-firing attack that hit 13 wides, with four of the starting six forwards withdrawn, unable to make inroads against a resolute Borris-Kilcotton defence. Today was disappointing for them, but they will be back here again soon, no doubt.

Borris-Kilcotton needed a bright start, to prove to themselves as much as anything else, that they weren't affected by the drawn game. Neil Foyle duly provided it when he burst through on goal in the first minute and fired past Noel Brennan.

Playing into a stiff breeze, it was a perfect start for Borris-Kilcotton, and PJ Scully made it better with a free soon after. Rathdowney-Errill were struggling to get going, as Brian Stapleton did a superb job of curbing Ross King early on. The didn't get a score until the seventh minute, but what a score it was. Jack Kelly lofted a ball into the penalty area, and John Purcell doubled on it, to steer his shot past Eoin Fleming.

Joe Campion pointed for Borris-Kilcotton in response, but Rathdowney-Errill were up and running now, and three points from King helped them to level the scores at 1-3 each after just 15 minutes of play.

Jake Creagh then made a brilliant diving block to deny Neil Foyle a goalscoring opportunity, before two Scully frees edged Borris-Kilcotton back in front.

Ross King halved the deficit before Aaron Dunphy and Scully (free) kept the winners on the front foot. It was again left to Ross King to respond for Rathdowney-Errill, and his free in injury-time left it 1-7 to 1-5 at the interval.

Rathdowney-Errill missed a couple of early chances to eat into that lead when play resumed, and Scully made sure they regretted that by floating over two more frees, as the lead went out to four.

King steered a free between the posts in response for Rathdowney-Errill, as the game threatened to descend into a shoot out between him and Scully. The Borris-Kilcotton man hit the target again before King added one from play; three points now between the them. Borris-Kilcotton were definitely on top now, but the game was blown wide open after that thanks to Rathdowney-Errill's second goal. James Ryan raced through the defence, only to see his shot saved by Eoin Fleming.

Paddy Purcell whipped in a shot from the rebound, but his effort came back off the post. Luckily for Purcell, it landed at his feet, and he held off his marker before scrambling the ball over the line to level the scores.

Scully and King exchanged pointed frees before Borris-Kilcotton wrestled back control of the game. Paddy Whelan and Scully (free) pointed in quick succession to give them a bit of a cushion, before they went on a run of five points in a row, as Scully (2), Joe Campion, Danny Fitzpatrick and Colm Stapleton left them on the threshold of history.

Rathdowney-Errill tried to get back into it, but there was no time for that, as Borris-Kilcotton held on for the historic win.