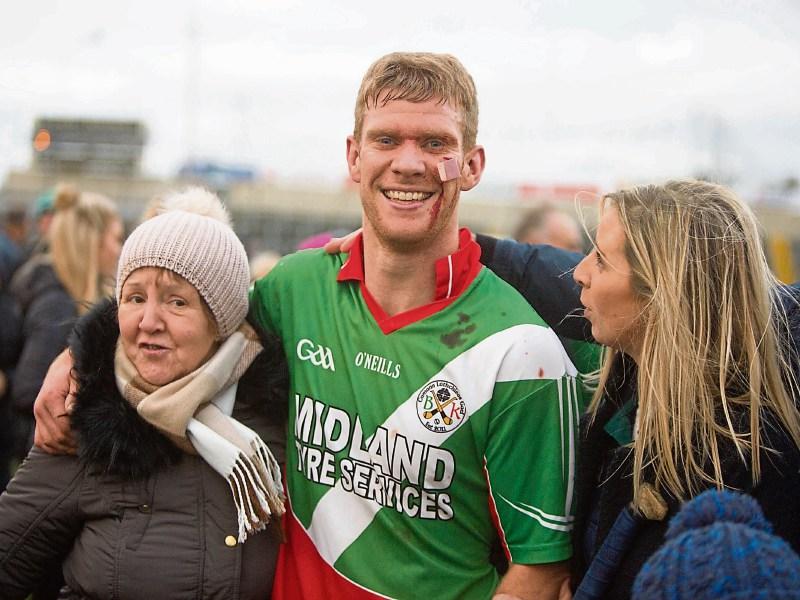 It will be one of the enduring images of this Laois SHC final, the bloodied face of Matthew Whelan at the final whistle, oblivious to the pain as the adrenaline of a first ever county title coursed through him.

A warrior for club and county over the last decade, the Borris-Kilcotton centre-back turned in another typically accomplished display here, and joked with the media afterwards that he will gladly take a scar on his cheek as a reminder of this famous victory.

As for what he and his team mates had just accomplished, Whelan felt it was a reward for their hard work in the recent past. “It's unbelievable, it has been about the hard work of the last few years, not just this year.

“We joined in 2011 and it was always our end goal to win a county championship. We were disappointed in 2013, maybe we thought we had our chance lost after the last game, but we worked hard between the last game and today, and I think it showed the true quality in our team.

“We're delighted with the result, but that's what we expect from our club team. We had to be at our best to beat Rathdowney-Errill, they have been the standard-bearers over the last ten years, they have been winning one every second year, and this was supposed to be their strong year, so it's a huge honour to beat them in a final.”

They certainly had to work hard for this victory, playing eight games, three of which were replays. It was a tough way to win it, but as Whelan pointed out, it did have its benefits. “It was the making of us as well, we had to come in the back door after losing to Ballinakill early on, after a replay.

“Ballinakill made us earn a really hard-fought win in the semi-final as well, and it really stood to us in the replay here again, we were in familiar territory and it was the long route, but we grew a lot as a team, we learned a lot about ourselves, and we got a good final product at the end of the day.”

Whelan also paid tribute to his team mate Neil Foyle, who set the tone for their victory. “In fairness to Neil he did it the last day and again today. Big players stand up in big games, and he did again, I'm delighted for him” said Whelan afterwards.