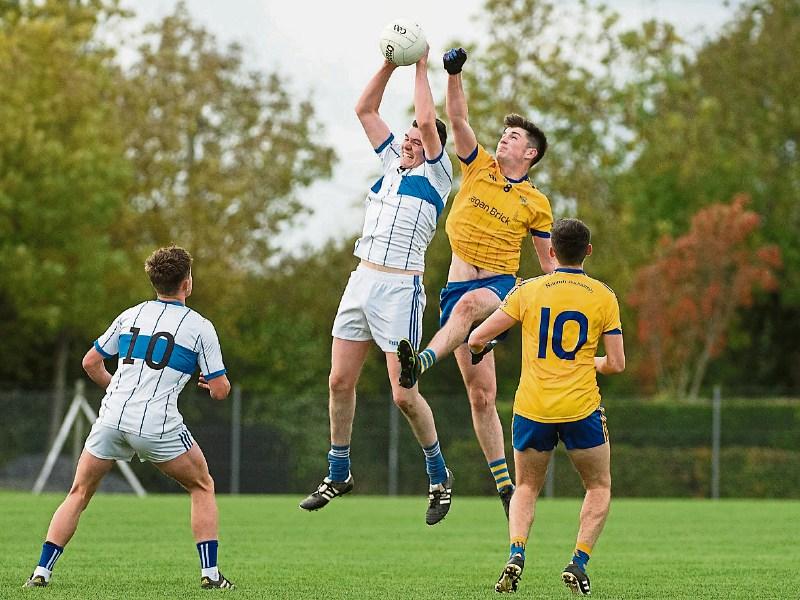 St Joseph’s-Barrowhouse advance to the semi-final stage of the Laois U-21 Championship following a late haul of 2-4 without reply against Courtwood-Emo-The Rock in Ratheniska on Saturday last.

St Joseph’s-Barrowhouse opened the scoring with just a minute played when midfielder, Brian Daly, slipped the attention of his marker with a clever pivot before stroking the ball over the black spot to set the scoring in motion.

Brian Daly wiped the slate clean minutes later with a converted free from his left boot as he grabbed his second of the day, leaving Mick Keogh to split the posts with a beautiful outside-of-the-boot effort to put St Joseph’s-Barrowhouse into the lead.

Danny Luttrell brought the sides level once again on the fifteen minute mark with a booming score from range, before following up with a converted free to see Courtwood-Emo-The Rock edge in front.

Brian Daly and Aaron Dowling exchanged points with ten minutes to go before the break, but it was Dylan Doyle’s sizzling shot right before the break that closed out the half as Seamus Mulhare sounded for half-time on a scoreline of five points apiece.

A slow start to the second followed as neither side registered a score in a tit-for-tat fifteen minute spell after the restart. Eventually, it was St Joseph’s-Barrowhouse that reopened the scoring with forty-seven minutes played when Dylan Doyle grabbed his second of the day.

Danny Luttrell converted a free from the resulting kick-out to level the sides for the last time in the game as St Joseph’s-Barrowhouse took control in the final ten minutes of the game. Full-forward, Mick Keogh, provided the catalyst for the scoring spree with a clever chip-up and measured point to set his side off.

Points followed from wing-back, Lir McDonald, and Brian Daly, before Keogh snatched the score of the game with a superb individual effort as he rang rings around the opposition defence before casually splitting the posts with five minutes remaining.

St Joseph’s-Barrowhouse continued to press forward and were duly rewarded with the goal that had evaded them all day when Dylan Doyle lifted the green flag with three minutes to go. Keogh landed his fourth of the evening a minute later, before Nigel Murphy grabbed a consolation point for his side on the stroke of full-time

There was still enough time remaining for St Joseph’s-Barrowhouse to extend their winning margin to ten points when substitute, Steven McDonald - who had only been on the pitch for less than a minute - rewarded his manager’s faith with a calmly taken goal to send them into the semi-finals.