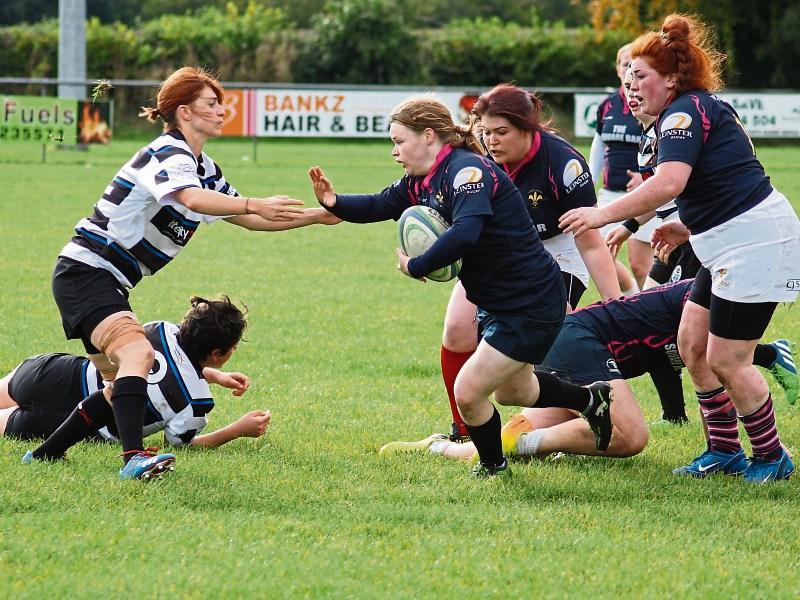 Wanderers travelled to Togher as favourites for this Leinster League clash at the weekend, having beaten Portlaoise in last year’s previous two outings.

However it did not take long for Portlaoise to show they had a different script in mind for this act of the on-going drama.

Within five minutes of the start Olivia Fennelly won the aerial battle in a Wanderers’ line-out and flanker Liz Brophy received the ball and made a great run, characteristic of a back, weaving through heavy Wanderers’ traffic until she was eventually tackled to the ground.

Front row Rosie Palmer, Diane Lawlor, and Yvonne Palmer were quickly up in support as the ruck formed. Danielle Hallinan, Olivia Fennelly and Claire O’Connell joined with a well worked-out rucking technique with all players employing a strong posture.

Stephanie Gleeson came through the gate and, with so many players committed, picked and went with confidence to score an impressive try, her second in two matches, in the corner fending off a lone Wanders’ defender.

It was left to Liz Brophy to make a break on the half-way line and outpace all Wanderers defenders and score beneath the posts. Brophy added topping to the treat by converting yielding a half-time score of 12-0.

Portlaoise opened up the game in the second half with some much disciplined forward play in the rucks. No penalties were conceded while in possession and releases were timely. When the opposition possessed the ball, Portlaoise players joining the ruck stayed on their feet and drove them off stepped over the ball and gained control.

Portlaoise moved play into Wanderers’ territory with a succession of controlled phases. Danielle Hallinan released to Michelle Carroll, who passed to Sarah Murphy, who in turn off-loaded to Louise Cody. Cody, ease and grace, sprinted thirty metres to the line and touched down right under the crossbar. Liz Brophy slotted the conversion to bring the score to 19-0.

Wanderers came back into the game with fifteen minutes to go and almost scored but for a try saving tackle from Breda Phelan. However they continued to push and scored two tries in the last ten minutes to give a final score of 19-12.

Newcomer Michelle Carroll had an imposing debut while Danielle Hallinan continues to impress.

Brophy, Cody and Gleeson clinically exploited the chances created by their teammates.

Portlaoise thoroughly deserved the victory but must examine the opportunity missed to close out the game with a fourth try for a bonus point. They remain clear at the top of the league table.

Portlaoise RFC welcomes newcomers to Womens and Girls rugby each Tuesday and Friday evening at 7:30pm. Why not give it a try.