Sarsfields see off Portlaoise in Laois U-21 Quarter-Final 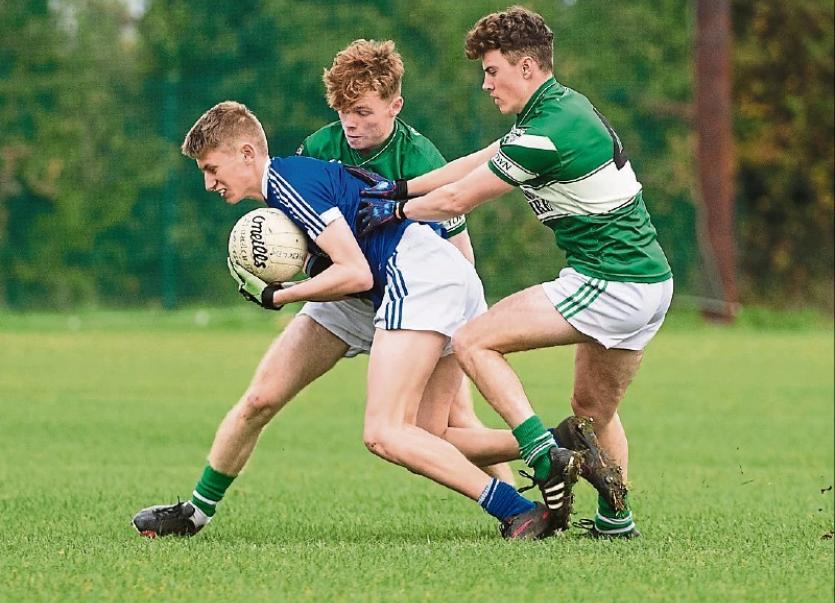 Sarsfields advanced to the Laois U-21 'A' semi final with a comfortable seven point victory over Portlaoise. The score line may flatter Sarsfields somewhat, as they scored a last minute goal, but they fully deserved the win.
Sarsfields got off to a flying start with an early goal. A poor kick out from Portlaoise goalkeeper Philip Roche, and the grateful Evan Hunt was on hand to punish the mistake with a fine finish. Portlaoise would respond with conviction though, scoring the next three points.
Full forward Shane Whelan was the man to kick off the scoring, followed up with points from Dean Cullen and a free from the same man, Dean Cullen. Sarsfields would hit right back, however. A Sean Moore point was the first point for Sarsfields, and this was followed with three consecutive points, all from the impressive Sean Moore.
All his points were frees, as he gave his side a five point advantage halfway through the first half. John Kavanagh would fire back with two points for his side, one a free and one from play, to close the gap to two points. The sides would then trade points, one from Moore for Sarsfields and the other a Jack Brown point for Portlaoise.
The final point of the half would go the way of Sarsfields, and it was Moore who got it, adding to his excellent and growing tally for the day. Before the end of the half, Portlaoise goalkeeper Philip Roche made an excellent save to make up for his early mishap. The half-time score read as follows; Sarsfields 1-6 Portlaoise 0-6.
The second half whistle blew, and it was Portlaoise to draw first blood for the second half as a Ronan McEvoy point closed the gap back to just two points. Sarsfields would then make their first substitution of the game, with Conor Mangan replacing corner forward Stephen Conroy.
Sarsfields would regain their three point advantage shortly after, with a free from the hands of Sean Moore. Portlaoise would again hit back and reduce it to two, with a score from Jack Brown, the wing back’s second for the day. Sarsfields Evan Hunt perhaps grabbed the score of the day, with a great team move finished off from the foot of Hunt, to again keep Portlaoise a goal away.
Sarsfields would crucially get the next score of the game, and you could see the Portlaoise heads dropping. Full forward Gary Hoffmeister would be the scorer, and so Sarsfields went four clear. A Sean Moore point from a free ball pulled his side five clear, before Portlaoise would bring it back to three.
A great score from Jack Brown, his third of the game from wing back, would bring one back. John Kavanagh would then point over a free, and so it was game on for the last few minutes. However, a Jason Cafferey point gave Sarsfields insurance, before substitute Conor Mangan sealed the deal, with a fantastic goal.