O'Dempsey's lose out to Kildare side Round Towers in Leinster IFC 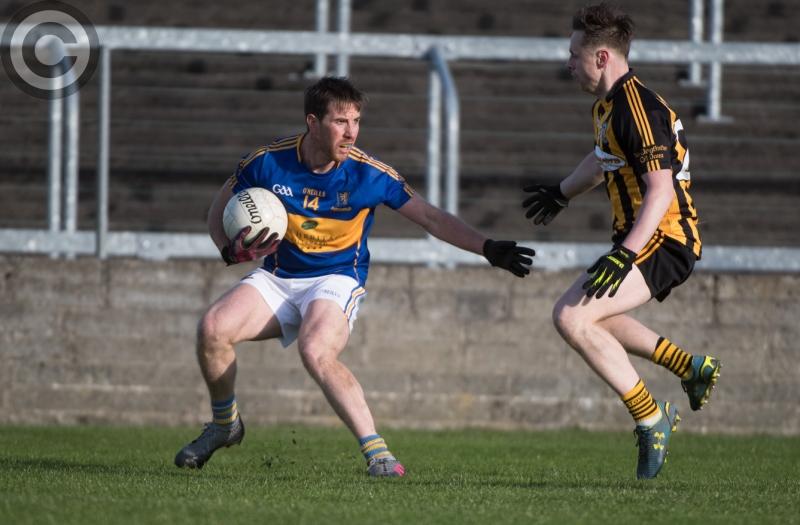 O’Dempsey's were knocked out of the Leinster IFC after a heartbreaking two point loss to a strong Round Towers team in O'Moore Park on Saturday.

The Killenard men were left to rue some missed oppurtunities after the final whistle, which ultimately cost them a chance of advancing to the semi-finals. Those misses, coupled with the loss of Conor Meredith, made for a difficult afternoon for all involved on Saturday.

Round Towers were first out of the blocks with a 45 converted by Matthew Kelly in the first minute. O’Dempsey's replied with an equaliser in the fourth minute through full forward Micheál Finlay. The sides then went on to trade points in the fifth minute, as Neil Scanlon was the scorer for Round Towers, while Ciaran McManus went down the other end to level things up from close range.

Round Towers started to pull away for the next ten minutes, with unanswered four scores. Stuart Murphy kicked off proceedings for the Kildare outfit after a fantastic ball was played into him. After that, Barry Waters fisted one over the bar, which was followed with points from midfielder Jamie Flynn and Stuart Murphy grabbing his second for the day.

O’Dempsey's got a point back through a Brian Nugent free. However, Round Towers remained dominant, with a free from Neil Scanlon bringing the gap back to four.

O’Dempsey's had a goal chance straight after, but midfielder Barry Kelly failed to convert. Four minutes later that miss was compounded with a point from Neil Scanlon for Round Towers.

The sides traded scores coming into the half time break, with Stephen O’Leary pointing over a free for O’Dempsey's, while Barry Waters knocked one between the posts for Round Towers. Round Towers looked fairly comfortable and satisfied at the half time break as they held a 0-9 to 0-4 lead over the Laois IFC champions.

O’Dempseys made a change at half time, with Matthew Finlay coming in for wing forward Ciaran McManus. This substitution had an immediate effect, with Matthew Finlay pointing within the first minute of play. Round Towers again replied strongly, with two points without reply.

Matthew Kelly grabbed Round Towers’s first point of the half in the 34th minute. This was followed up three minutes later, with the impressive Neil Scanlon adding to his tally for the day. O’Dempsey's, however, were known for their heroic comebacks, and they showed no signs of giving in.

A point from Brian Nugent from a placed ball got a bit of confidence back, and midfielder Barry Kelly added to the gaining momentum when he slotted one between the posts. The crowd were in full voice now, and O’Dempsey's had all the momentum with them. However, some missed oppurtunities meant that we would have to wait another while for the next score.

Crucially, the next point went O’Dempsey's way. Brian Nugent converted a free, and now their was just three between the teams. Padraig Bannon made a great stop to keep his side in the game shortly after, however it did not matter in the end, as O’Dempsey's failed to kick on from this.

A point in the second minute of injury time point from Nugent was not enough to get anything from the game, as Round Towers advanced to the last four.