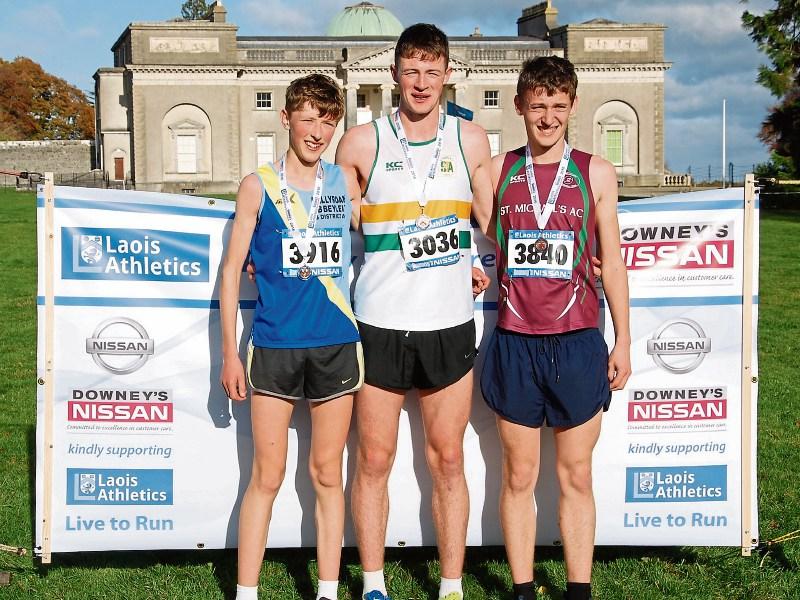 Another beautiful morning greeted the athletes and spectators for the third day of the County Cross Country Championships at the weekend.

It was a little on the chilly side, with a cold breeze from the north, but conditions were good underfoot, and there was no rain, which is always welcome! The event was a joint venture from host clubs St Michaels AC and Mountmellick AC, and the majestic Emo Court was the venue for the day’s events.

The course was well marked and took in some steady climbs, and downhill stretches, and was excellent for viewing for the many parents, coaches and spectators who attended.

The events started with the juvenile development races, which are for juveniles who did not score an individual medal from the previous county even and uneven events already run this season.

This gives these athletes the chance to gain some excellent race experience, and also another chance to score a county medal, with the first six across the line to receive a medal.

Action kicked off with the U-10s, who had 800m to race over. The girls race was won in good style by Torrie Lee from Mountmellick AC, and the boys race went to runaway leader from start to finish Tom Corcoran from St Michael’s AC.

The U-12s had 1,200m to contend with, and there was a great race in the girls section, with Grace Meade from Portlaoise AC holding on from a super challenge in the finishing straight from Kate Connolly (St Michael's AC). The boys race went to Rory Lalor from Rosenallis-Kilcavan.

With a race distance of 1,600m for the U-14s, the girls’ race was won in fine style by St Michael's AC runner Grainne Cotter, with fellow clubmate Charlie Hackett taking gold in the boys’ race. The U-16s raced over 2,500m, with Sarah McMahon (Ballyroan Abbeyleix and District AC) taking the girls race and Curtis Lee (Mountmellick AC) winning the boys’ race.

The Junior Men’s race took place with the Masters Mens’ race as both were run over 6,000m, and this was a walk in the park for recent Leinster U-18s champion Cian Kelly from St Abban's AC. A good run from Cian McDonald from Ballyroan Abbeyleix and District AC saw him take the silver medal, with Cathal Grennan from St Michael's AC in third place.

The Masters Women’s race was over a shorter 3,000m, but it was nonetheless a competitive race out front, with Colette English from St Abban's, and Monica Corcoran from St Michael's taking up and early lead.

As the race progressed, the leading pair extended their lead on the rest of the runners, with Monica sitting on Colette’s heels. As they turned the final bend with the finish line in sight, Monica surged ahead of Colette and kept on strong to cross the line in front, with Joanne Carroll from Portlaoise coming home in third.

These were the first three O35s across the line too. In the O45s race, first over the line was Anna Duggan from Portlaoise, second was Mairead Moore and third was Ann Nichol, both St Abban's.

The Men’s race was over 6,000m (run in conjunction with the Junior Boys) and it was soon evident where the race places would go. Stephen Hunter (St Abban's) took up a big lead from the start, but was soon surpassed by club mate John Fenlon at about midway.

John ran on strongly, was never challenged, and was a comfortable winner. Stephen stayed on for second, with Portlaoise AC’s Tony Reilly running a good race to come home in third place, and taking the O45 gold medal. Next over the line was Colm Burke (St Abban's) who took the silver O45 medal. Riobeard Miller took the O35 bronze medal, and was followed by Aengus Burke (Portlaoise AC) who took the O45 bronze medal.

It was a great day of racing, and thanks must go to the organising clubs who pulled out all the stops. Special mention must go to Noel Coss from Mountmellick who did a great MC job on the mic, with post race interviews and excellent running commentary throughout.

We saved the best until last, with the Laois Senior Cross Country Championships on Sunday 20th November. This jewel in the crown of County Cross Country running will take place at another magnificent Laois venue - Stradbally Hall, and will be hosted again by last year’s Men’s team winners St Abban's AC.

This day will also feature the juvenile XC relays, and these are always great competition and very exciting to watch. Hope to see you all there!