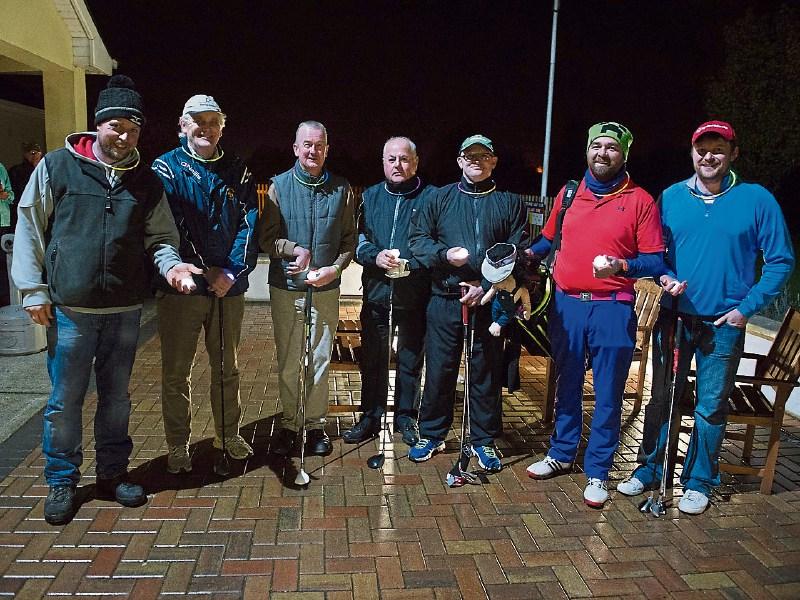 If the shorter evenings have you lamenting the lack of opportunities to play a few holes of golf after work, then lament no more, because Portlaoise Golf Club have the answer to your problems.

Last Friday night the club launched one of the most novel sporting experiences ever offered in Laois - Night Golf. Thanks to special golf balls which contain an LED light, an LED flagpole, and a scattering of LED guiding lights on the fairways and greens, you can now navigate your way around nine holes despite the lack of daylight.

This venture is the brainchild of current course manager Ger McEvoy, who saw videos of this adapted version of golf on YouTube, and decided Portlaoise would become one of the first courses in Ireland to stage it.

Last Friday night saw the club host their trial run, as a lucky few got to play three holes of night golf to see how the game works.

The key to it all are the golf balls, which light up once they have been struck by a club. They remain alight for eight minutes after the initial contact, so you have plenty of time to follow it down the fairway and line up your next shot. The flagpoles stand out as a long beam of white light, surrounded by smaller green LED lights which indicate where the putting surface is.

Having been one of those given the chance to play it, I can confirm it is every bit as entertaining and bizarre as it sounds. Watching your ball simultaneously light up and then arc away from you, against the backdrop of an inky black sky, is something you really have to be present for to fully appreciate; it is a unique experience. A friend asked me afterwards how I would describe, and the best I could come up with was that it's like a cross between Star Wars and golf. There are videos on our website - www.leinsterexpress.ie/sport - which will give you some idea of what it is like.

Obviously enough, if you're trying to work on your swing or get your handicap down for the monthly Medal, then this isn't the kind of golf you're after. The LED balls don't fly as far as a normal one does (although there isn't a massive difference), and you won't have much opportunity to line up your putts or ask your playing partners to analyse your backswing.

This is a game you'll play for the enjoyment and craic, and there is plenty of that on offer. If you come to it in the right frame of mind you'll love it, and considering most of the other places to offer Night Golf are exotic locales like Florida or Dubai, then it's worth a venture down to Portlaoise for the experience alone.

After the launch last Friday, there will be nine holes lit up this Friday night, November 11, and bookings are being taken now for what the club are calling 'Nine At Night'. It will cost €20, which includes a pint in the bar afterwards.

The plan is to run it twice a month over the winter, so keep an eye on the Portlaoise Golf Club Facebook page for updates, as it will also be weather-dependent. Alternatively, you can phone the club house on 05786-61557 for more information, or to book a tee time for this Friday night.