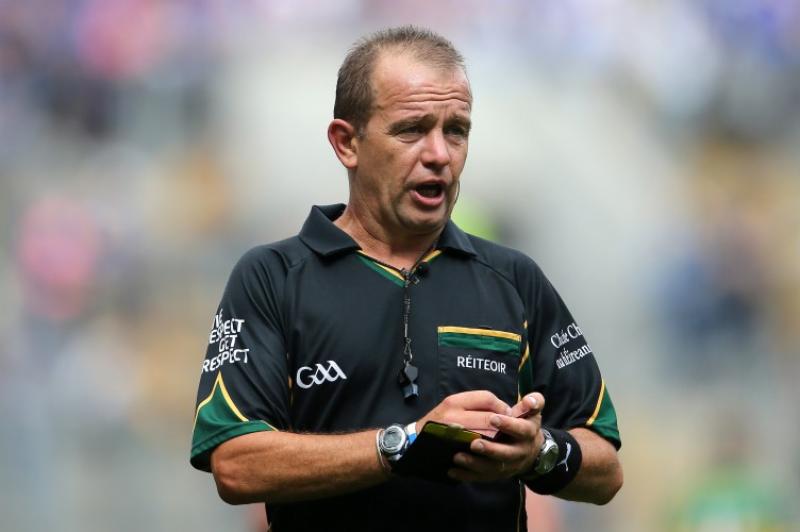 Courtwood referee Eddie Kinsella has had to hang up his whistle at intercounty level, as he has now passed the age threshold for intercounty games.

After a refereeing career which has seen him take control of Minor, U-21, Senior and Club All-Ireland finals, he steps away knowing he could have achieved no more from a career which also afforded him trips around the world because of his work with the whistle.

His final game was a third round qualifier in Breffni Park, between Cavan and Derry, but undoubted highlight was being the man in charge of the 2014 All-Ireland, between Kerry and Donegal.

While often a much maligned aspect of the modern game, Kinsella gave some insight into the level of commitment now required to referee at the highest level. “There are big demands now, I would have to be training four or five nights a week, we have five fitness tests a year as well that you have to pass, and you would be up to Dublin every two or three weeks to review footage and your performances.

“The first of those fitness tests is in January, so you get no break at all really.”

He was also the first to admit that he could have no complaints about the career he has had. “I have gotten to go to Dubai, New York, Boston, all over Europe, I can't complain, I have been very lucky.”

Having had those experience, he is keen to encourage other to take up the job, with one caveat. “I think some people that take it up don't give it enough of a chance, they don't give themselves time to develop. They have one or two bad games and then they stop.

“You have to give it a chance to work out, I could have walked after the first few games because of the amount of abuse I was getting, but I wanted to stick with it, I liked it and I wanted to get better.”

The rewards, as Kinsella points out, are evident. “The first game I ever refereed was down in Cullohill, it was a a Junior C match between The Harps and O'Dempsey's, and it was some game, and I went from there all the way to an All-Ireland final.”

Kinsella will continue to referee within the county for the foreseeable future, although he admits he would like to branch out into other things in the future, including management, where he has enjoyed success with St Paul's-The Rock.

He also paid tribute to his wife Sinead, son Alan and daughter Chloe, who he revealed sat outside the Cusack Stand for the second half of the 2014 All-Ireland final after Eddie drew the ire of some Donegal fans, who were a little too verbal about her father for her liking!

His umpire team of Pat O'Connell (who first suggested refereeing to him), Alan O'Halloran, Niall Murphy and Arthur O'Connor, along with Pat Behan and Tom Kinsella, who have also helped out over the years.

While his intercounty career might be over, with a few more irons in the fire, we won't have heard the last of Eddie Kinsella just yet.