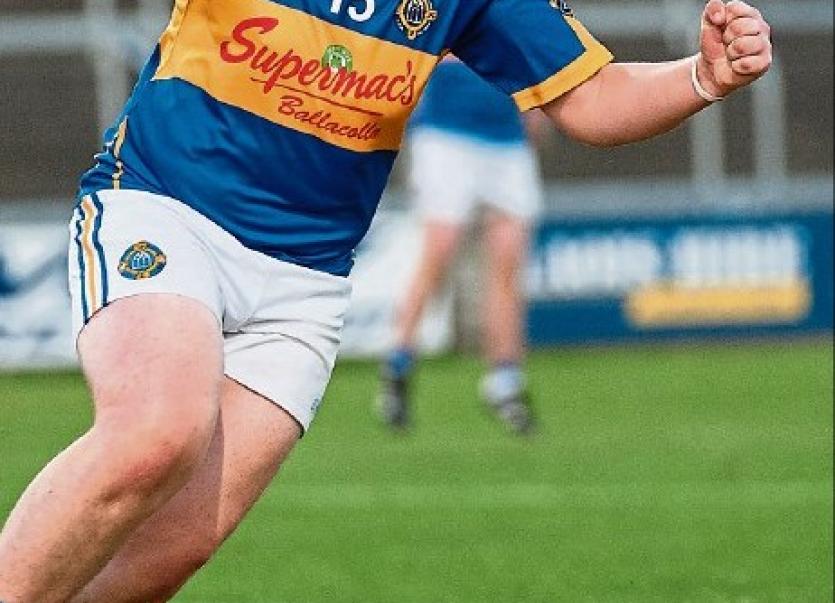 On a good winters day for hurling Clough Ballacolla edged out Castletown-Slieve Bloom in an entertaining match played on a brilliantly kept, albeit damp, surface in Rathdowney.

Castletown started the better of the teams and were three points to one up early on with all their scores coming from Dylan Conroy. Ballacolla, however, kept tabs with Jordan Walshe knocking over three points of his own all from frees to leave the teams level after a cagey opening quarter.

This really was a game of two halves as the second half was played at about 100 miles an hour faster than its predecessor. Ballacolla started the half better and manic work rate from their forwards ended up with a good score coming from Aidan Corby. Conroy responded with a free but then a super pass from Brian Corby found Stephen Bergin who converted tidily and Ballacolla looked to be motoring now.

Somewhat against the run of play Castletown struck for the first goal of the game, a great run from Martin Phelan drew Ballacolla defenders and he handed off to James Tobin who finished powerfully to the back of the net. Ballacolla responded instantaneously through Walshe who won his own ball spun and pointed to leave the teams level.

The two teams exchanged points before Tobin got his and his sides second goal of the game; a pretty innocuous long ball that the Ballacolla defence seemed to have under control was somehow flicked by Tobin, in a way that it changed direction and looped over the helpless Philip Heneberry. Conor Phelan added a long-range score and Castletown were looking good for a semi-final place.

Ballacolla showed great battling qualities throughout though, and Stephen Bergin responded immediately with a point of his own before great work down the wing from Lee Cleere saw the ball end up in the hands of Walshe, who finished emphatically to the top corner to leave the scores level.

Walshe added another good point from play before points from Conroy and Tobin had Castletown one up with five left. Ballacolla kept fighting and they got their rewards through four unanswered points in the closing stages to put them three up. With the last puck of the game Ryan Mullaney had a tough chance to level it but his free was blazed over.