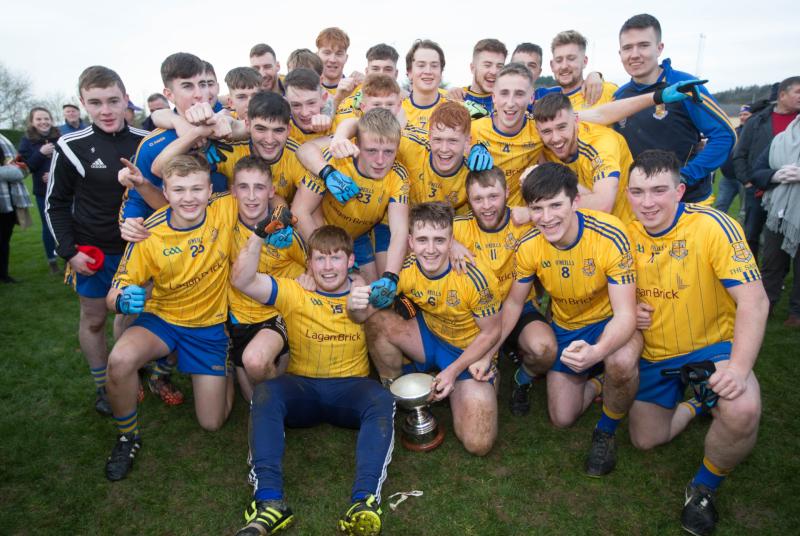 St Joseph’s-Barrowhouse came out twelve points to the good against Sarsfields in Ratheniska on Saturday afternoon to see them claim the Laois U-21 title for the second consecutive year.

St Joseph's-Barrowhouse overcame Killeshin-Crettyard in their opening round clash by three points on a gusty day in Graiguecullen, before going on to dismiss the efforts of Courtwood-Emo-The Rock, O’Dempsey’s and now Sarsfields, by double-digit margins on route to their two-in-row campaign.

Sarsfields opened the scoring with two minutes on the clock when full-forward, Sean Moore, converted a close-range free to set the scoring in motion and give his side an early lead. St Joseph's-Barrowhouse hit back with a point of their own from the boot of Dylan Doyle before going on to take the lead themselves, with James Smith finishing off a clever one-two with Noel Leech to edge them into a lead they would hold for the duration.

With eight minutes on the clock, Brian Daly landed a pinpoint pass into the hands of James Baldwin who made no mistake with the finish, as he casually split the posts to double the St Joseph's-Barrowhouse advantage.

Sarsfields cut the margin in half with James Hilliard’s booming score from thirty-five metres to keep them within touching distance just after the ten minute mark.

St Joseph's-Barrowhouse pressed on with Dylan Doyle grabbing his second of the half, before his wing-back, Lir McDonald, measured his shot precisely as it clipped the crossbar on the way over to extend the St Josephs-Barrowhouse lead out to three points as the game entered the second quarter.

Evan Hunt’s effort twenty-two minutes in needed the help of the upright before lifting the white flag, making it a two point game as Sarsfields kept right on St Josephs-Barrowhouse coattails approaching the end of the half.

There was still time, however, for St Josephs-Barrowhouse to tack another three points to Brendan McCann’s scorecard through Mick Keogh, and a Brian Daly brace to push their lead out five points in the first minute of injury-time. Sarsfields rallied in the final moments of the half and were rewarded with Sean Moore’s second free of the game to close the gap to four points as the half-time whistle sounded.

An early exchange signalled the restart of the half with Keogh and Moore trading points early on, before Brian Daly notched his second brace of points as St Joseph's-Barrowhouse pulled further away.

Sean Moore broke the St Joseph's-Barrowhouse rhythm with a close-range free, but the eventual winners wasted no time in adding to their cushion as points followed from corner-back, Andrew Baldwin, Daly and Keogh before Adam Campion finished off the move of the game.

Having turned over the ball on their own twenty-one, St Josephs-Barrowhouse worked the ball up the pitch through a series of intricate passes and one-two’s before Campion fisted into the net for a near Tiki-Taka inspired goal.

Sean Moore headed a Sarsfield attack that searched for a way back in the final ten minutes, as he pointed a quick-fire brace but Doyle and Keogh were equal to his efforts and they responded almost immediately to keep their eleven point margin intact.

Sarsfield’s battled until the final whistle and wiped two points off the deficit with late scores from James Hilliard and substitute, Jason Maher, but the final whistle sounded as St Josephs-Barrowhouse claimed their second Laois U-21 title on the trot with twelve points to spare.