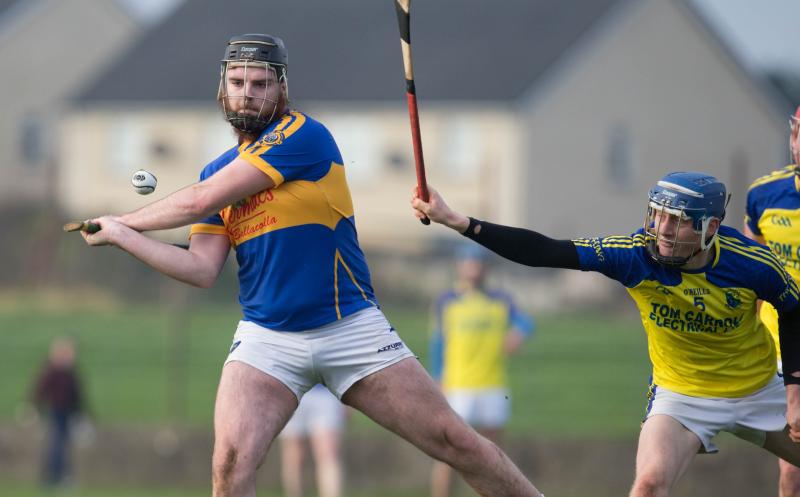 An impressive battling performance from Clough-Ballacolla was enough to overcome the challenge of Abbeyleix and see them through to a county final against Borris-Kilcotton.

It was Abbeyleix who opened the scoring on another freezing cold day in Rathdowney with the pitch yet again in excellent condition for November. Rory McEvoy broke the deadlock with a great point from the sideline to get the scoring up and running.

Jordan Walshe hit back with a free for Clough-Ballacolla, then both full forwards exchanged points before Stephan Bergin was brought down on his way to goal and Ballacolla had themselves a penalty.

Ronan Broderick came up from full back and with Enda Rowland beaten the ball struck the post and ricocheted out to the left. Ballacolla’s forwards stayed battling and they were rewarded with a free which Walshe pointed from a difficult angle.

Then came Abbeyleix’s most dominant spell of the half, three points including two long range efforts from placed balls by Rowland gave them a two-point lead. After that, however, Ballacolla came to life.

Two good points from John Dwyer and Brian Corby were followed by a crucial goal. A long ball into the Abbyleix square had Walshe and Alan Lynch grappling for possession, and the ball deflected off a hurl and ended up rolling past Rowland and into the bottom corner.

A few minutes later Clough-Ballacolla nearly added another goal, but a superb save from Rowland denied Robbie Phelan. Ballacolla then won a free after more good pressure from their forwards and Walshe pointed to give them a four-point lead at the break.

Brian Corby opened the scoring in the second half for Ballacolla and this was followed by another long range free from Rowland. Ballacolla then scored the next two points with long range frees being a feature of the day with Ronan Broderick adding his first from distance.

The game now looked to be getting away from Abbyleix and when they were awarded a free just outside Ballacolla’s 21 Rowland came up to try his luck. His shot was saved and Broderick would soon go on to add his second-long range free and the game looked as good as done now.

Credit to Abbyleix though they kept battling and as Ballacolla began to drop deeper towards their own goal, they dominated possession in the final quarter. Unfortunately for them, a combination of a lack of firepower in the forwards and a good Clough-Ballacolla defence stifled any chance they had of a comeback.

In the closing stages the teams exchanged four points each, and crucially every time Abbyleix scored Ballacolla were able to reply with one of their own to keep the margin at six points. Abbyleix finished strongly with a free from Callum Mullen and a goal which came after a 65 was dropped in to the square, there was a mad scramble and the ball was eventually bundled over the line by a combination of legs and hurls.

Ultimately it wasn’t to be for Abbyleix though, as Clough-Ballacolla marched on to the final with a three-point win.