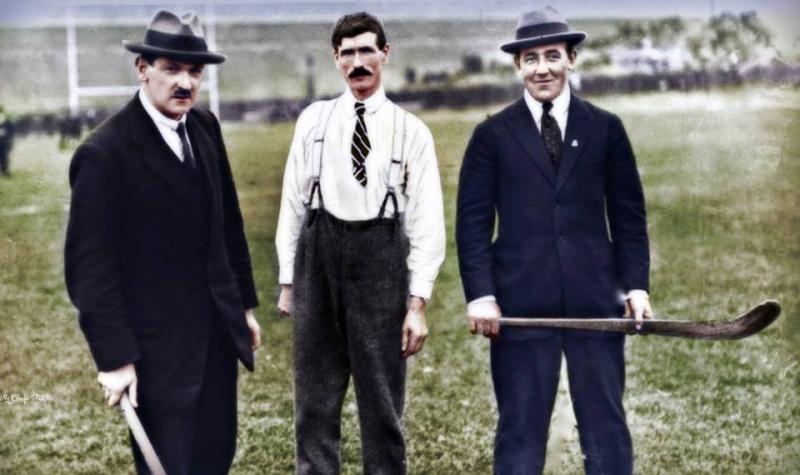 The family of former Laois referee Pat Dunphy attended the recent Referees Banquet in Croke Park, where he was posthumously honoured for his contribution to the GAA.
Dunphy, who was born in Kilkenny but lived in Abbeyleix, was one of the pre-eminent referees in the early years of the Association.
Dunphy refereed five All-Ireland football finals in a row, from 1915 to 1919, and refereed both the football and hurling finals in 1922, one of only three men to hold such an honour.
Outside of refreeing, when he moved to Dublin later in life he was also one of the founding members of the All-Ireland Handball Association, but his contribution to the GAA is only one aspect in a remarkable life story.
A close friend of Michael Collins, he also fought in the war of independence, and frequently had to go on the run to avoid capture by the Black and Tans. Indeed, his grandson Christy Dunphy, who accepted the award on his behalf, admitted stories passed down through the family told of Collins staying in the family home when he passed through Abbeyleix.
Christy also revealed that his grandfather's activities during those turbulent years in Irish history are making it difficult for them to track down exactly how many matches he refereed. “We think he reffed more games than we can confirm, he would have refereed some of them under an assumed name, because he was on the run from the Black and Tans.”
Another of Collins' close allies, Harry Boland, was also recognised at the banquet in Croke Park, having refereed the 1914 All-Ireland football final and acted as Chairman of the Dublin County Board.
Indeed a picture, shown above, shows Dunphy with both Collins and Harry Boland before the Leinster hurling final in 1921.
Christy Dunphy also told an interesting story on the fate of the sliotar used in the 1915 All-Ireland hurling final, Laois' only All-Ireland success. “My grandfather was down to referee the 1915 hurling final between Laois and Cork, but Cork objected because he was now living and working in Laois at the time.
“He swapped with Willie Walsh, who also refereed at the time, and did the football instead, and Willie Walsh gave him the hurling ball used in the final afterwards, and that ball is still in my house, and now it sits beside this plaque.”
Dunphy worked as a carpenter around Abbeyleix until his wife died. They had four children - Paddy, Mick, Christy and Kathleen - and Pat eventually relocated to Dublin after the death of his wife, where he remarried. The former singer Sean Dunphy, who died in 2011, was also a grandsonof his.
Pat Dunphy died in 1938 at the age of just 53, and is buried in Glasnevin cemetary in common ground. Christy Dunphy also revealed that the GAA have a project in motion at present to protect or restore grave sites of important early members of the association, and they are hoping this may help the family to boy the plot outright.
Pat Dunphy was not the only Laois referee to be honoured on the night in Croke Park, with both Eddie Kinsella and Maurice Deegan the beneficiaries of a new award scheme to honour intercounty referees.
Those who officiate for over 25 games are awarded a silver medal, while referees who take control of 50 or more games are given a gold medal. Kinsella picked up his silver medal on the night, while Deegan picked up gold, as both men have refereed 25 and 55 championship games respectively.