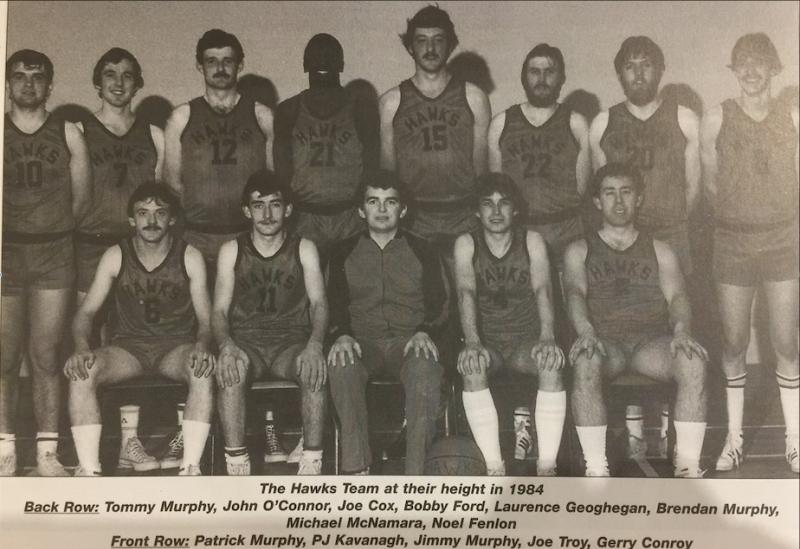 The Portarlington Hawks team from 1984.

Laurence Geoghegan may not be iconic colossus he once was, towering over all in his path.

The mercurial Jacko Murphy may not be as fleeting across the wooden floors he graced all those years ago either, and certainly Ger Wheeler may well be more tired after his long haul flight from Toronto, than he ever was after a basketball championship.

Regardless of all that, it is nonetheless with great anticipation and excitement that Portarlington awaits the upcoming reunion of the legendary Hawks Basketball team.

Time changes most things, yet some things remain the same – the Fallons still play basketball most weeks in the Community Centre, and Tommy is still liable to give you a friendly dig if you’re scoring anywhere near him.

You will still have to be very nimble if you plan to go around Paul’s nifty footwork for a drive to the basket. And, naturally enough, there are all kinds of Fallons present, male and female alike, from teenagers to almost septuagenarians. And Gerry Conroy will still claim to take on all comers in a three point shooting contest.

Basketball is in the blood around these parts. After all, Portarlington was, once upon a time, the ‘Home of Leinster basketball' according to former Irish coach Liam Hartigan.

Basketball arrived in Ireland as a popular sport in the 60’s and few places in Ireland took to the sport with as much enthusiasm and gusto as Portarlington. Started by the Catholic Club, it really grew wings once Liam Hynan and Austin Barry got on board.

From there, success was almost immediate and already by 1966 basketball was so popular in Portarlington that they had six senior and eight juvenile teams participating in local leagues. The U-16s won the Laois Championship in their debut season, paving the way for an avalanche of success that was to follow.

The famous Hawks name arrived in 1970 thanks to a suggestion from Eugene Murphy, and it wasn’t long before Portarlington were feared and respected in equal measure across the length and breadth of Ireland, culminating in participation in Division 1 of the Men’s National League in the 1980’s.

Memories of a smoke-filled GAA centre throbbing with excitement and noise, and an almost unmatched atmosphere, will be sure to bring back some very happy memories for Portarlington people of a certain generation. The whole town got behind their heroes and the support was immense. The reaction to the news of a reunion has been incredible.

Portarlington went on to enjoy overwhelming success at underage level, at schools level, in community games and of course at local and national level in senior competitions. A town comprising two successful GAA clubs and split by a county border was unified under the basketball umbrella.

The Hawks brought success on a new level to the town and these legendary players were the pride and joy of the local area. The team brought unbridled joy and happiness to the town. Unfortunately almost as quickly as basketball arrived in Portarlington it was gone in the mere blink of an eye.

The sport disappeared almost entirely for the best part of twenty years, apart from the effort of the Fallons in fielding a Midland League Men’s team for as long as they possibly could. Nobody can put a finger on how exactly this happened, but basketball soon became the sleeping giant of Portarlington sport.

Thanks to the efforts of another legendary local basketballer, Louise Phelan, and a few other dedicated souls, basketball has been resurrected from the ashes and is thriving once again in the Midlands town.

The new club, Kestrels, has had huge success at underage level, producing a large number international representatives along the way. Only this week Adam Ryan and Rioghan Murphy were selected on the Irish U/15 development squad.

The Senior Mens team have dominated the Midland League in the past couple of seasons and are now back in the National League Division 1 after an almost 30 year absence.

The team just knocked Killester out of the quarter final of the Hula Hoops President’s National Cup this past weekend, and are due to play another one of Ireland's fabled clubs in the form of Neptune of Cork in the semi final. That takes place on the weekend of the 7/8th January in Neptune Stadium, Cork.

The Hawks Reunion has propelled basketball back to the forefront of the minds of sporting people in Portarlington. There has been a quiet revolution taking place locally since Kestrels was founded and organised basketball returned in 2007.

Louise Foster, Theresa Whelan and John O'Connor got the club rolling again and with each providing a son on that very first underage team, a new generation of basketball stars were about to emerge in the town. Kestrels are back as a dominant force in the underage scene, winning many titles in both the boys and girls divisions.

They have also produced multiple Irish representative’s which is a great indicator of the quality of coaching that they receive. The senior club re-emerged two years ago and a very youthful senior men’s team won the Midlands Cup in their opening season.

Last year the Mens team rejoined the National League and they finished a very credible sixth with what was the youngest squad in the league. It was at Midlands level though where Portarlington Kestrels proved they were back to the dominant force that hadn’t been seen since the 80’s finishing the season unbeaten while winning the league, Cup and Top Four. Encouragingly Conor Foster, Aaron Whelan, Glen Mitchell and Liam Guinan currently form the backbone of the Kestrels Senior Mens team, having all started out together on that very first underage team in 2007.

This year the Mens team has continued to improve and have progressed into their very first National Cup semi-final against Neptune this coming January after beating St Vincent’s and Killester along the way. The American players have also returned. Currently Kestrels have the exciting former Harlem Globetrotter Chris Teasley Jnr in their ranks.

Ed Reddick was very much loved by all at the club after his impressive season last year. They join the legendary names of Bobby Lee Forde and Phil McManus who created so much excitement around the town all those years ago.

While basketball in Ireland had faded dramatically from the halcyon days of the 70s and 80s, green shoots have been emerging in recent years. With new members coming into the EU in 2004, a slew of talent has been flowing into the country from basketball hotbeds such as Lithuania, Poland and Latvia. Kestrels inherited a jolly giant in the form of Daniel Debosz who has been an integral part of their success since the senior team was reformed, hardly missing a game in three seasons.

The team currently has a number of Lithuanian players on their books and the club has been a positive example of successful European integration. There is a conveyor belt of young talent coming through with 6’11” James Gormley and Dylan Dunne prime examples, two 17 year olds playing big minutes for the senior team.

The Womens team returned last year too and were hugely impressive in their opening season, missing out narrowly on league and Top 4 titles. They have strengthened further this season and will challenge for titles again this season. The future is certainly bright for basketball in Portarlington and the positive flow of nostalgia from the Hawks reunion is sure to propel the club to even bigger things. Support has returned to the town with large attendances at all home games.

The club would love to see some of the older supporters return to watch the games. The days of basketball as the forgotten sport have passed. Local businesses have returned to get behind their club.

Robert Wright, owner of the local Heritage Hotel and a self-confessed basketball nut has supported the team for the past three seasons, providing financial support as well as encouragement to move the club on to bigger and better things.

Portarlington Credit Union and The Anvil Inn have also come on board as sponsors this season and the club deeply appreciates the support received. The club would also like to thank the huge number of smaller sponsors as well as many donors and volunteers.

Ireland is a much changed place to what it was when the Hawks were in their pomp, but thankfully Portarlington has proven that it is still a basketball town. Basketball really is in the blood around these parts.