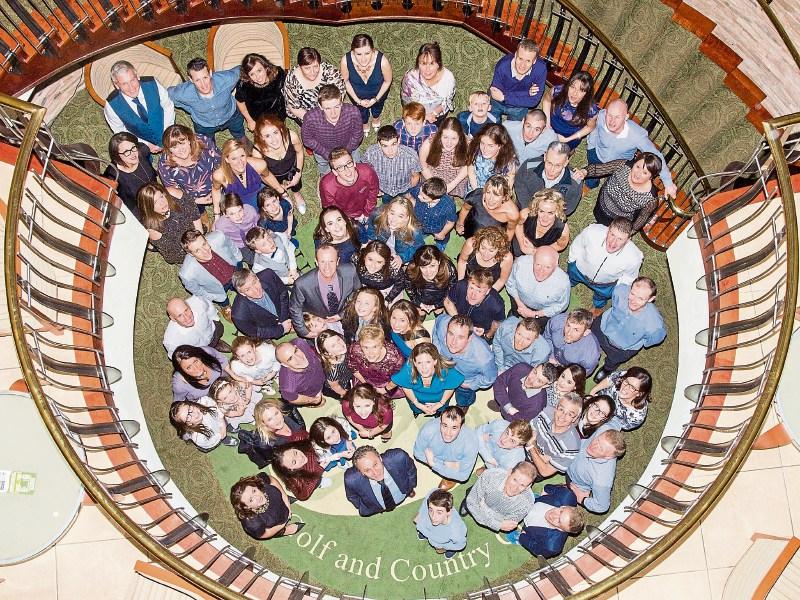 Laois Athletes took many of the top honours at the 2016 Nuparc Wellness End of Year Awards ceremony, which was held at The Heritage Golf Club, Killenard.

A group of 75 people, both athletes and their families attended this year’s event, a significant increase in numbers from last year. The Nuparc Wellness training group is run by husband and wife team Ian and Teresa Wilson, who have been based in Co Laois for over three years now.

In this time, athletes in this group have achieved 19 International Medals, 14 Irish Vests, 46 All-Ireland/National Medals, 60 Individual Provincial Medals, 105 Individual County Medals. Ian is a UK Level 4 Endurance coach, while Teresa is a UK Level 2 Coach as well as a registered nurse. Both are passionate about running and improving performance, and their growing band of ever improving athletes is clear evidence of this passion at work.

They coach a group of approximately forty athletes, mainly from Laois, but they are now working with groups from Tipperary, Kildare and Dublin. A number outside of the Laois group have developed considerably in the past half year, athletes such as Paul Moran and Evelyn McNelis (who won two medals at the Perth World Masters under the Wilson's guidance) and a number of the All-Ireland Naas AC juniors. They have recently secured kit funding for 2017 from Tipperary based Clancy Construction.

Our Laois athletes figured highly in the awards on the night. “The Laois athletes have worked very hard, and we are very proud of their development and athletic performances this year” said Teresa Wilson. The athlete awards began with a special achievement award for Aengus Burke from Portloaise AC in acknowledgement of his outstanding contribution to the sport, his positive attitude towards the sport, and at the age of 52 he is still running personal best times hitting 1:15:09 in August, a life time best for the half marathon distance.

Other successful Portlaoise athletes on the night were Louise Stack, Trisha and Cyril Cuddy, James Hamm, Colm Fitzgerald and Domhnall O’Farrell, each of which were presented with customised glass trophies for their athletics performances this year. Ballyroan, Abbeyleix & District AC were well represented among the awards, with Jean McEvoy receiving awards not only for her improvement, but also for achieving the most PBs as a female athlete this year.

Her club mates, Avril Deegan, Sorcha Maloney and Sandra Fitzpatrick were also among the award recipients. Just three days after the awards night, Avril Deegan was included in the Irish team for the Celtic Cross in January after an outstanding second place in Dundalk, so well done to Avril.

Roibeard Miller, who represented Ballyfin AC, won an award for national representation and an international medal when he represented Ireland in the recent British & Irish Masters Cross Country in Glasgow. St Michael’s AC were represented by two couples - Monica and John Corcoran, and Mark and Pippa Hackett, all receiving awards for athletics performances and improvements this year.

Emo Rath AC’s successful juvenile Eddie Allen, and Mountmellick AC’s athlete Rory Morrissey both received awards for their improvements and PBs this year. A second 'Contribution to the Sport' award was made to Jimmy McCormack also from Portlaoise AC for his outstanding contribution to the sport through his photography.

The youngest juvenile athletes were also recognised for their achievements. Although many are still very young in this group (with an average age of 9!), they are already learning the good habits, skills and techniques that will last them a lifetime in athletics.

The objective of the Wilson's is to instil a love of the sport to the youngsters in a hope that they will become the future of athletics in Ireland. “The main focus for our younger members is that they have fun whilst learning basic skills of the sport and understand other important aspects such as track safety”.

For the Nuparc group “we are looking forward to next year, which is shaping up to be a great year for our athletes. As for our Laois athletes, we know we can bring out the best in them, benefitting not only the individual athlete, but their respective clubs also” said Ian Wilson. Roll on 2017!