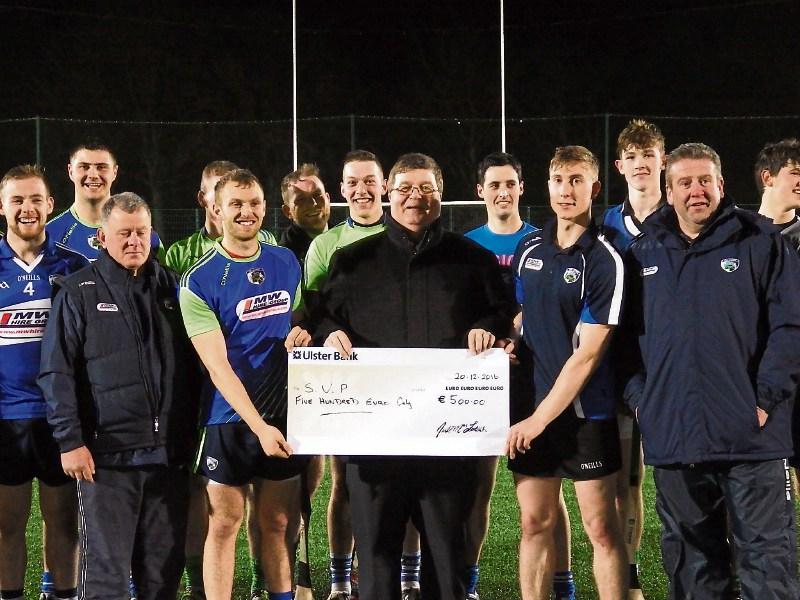 The Laois Senior and U/21 hurlers embraced the festive spirit last week when they donated €500 to the Laois branch of St. Vincent de Paul.

There won't be much rest for Laois GAA players over the Christmas period, as the new season will begin on January 6.

The Laois U-21 footballers will be first into action on that Friday night, as they host Carlow in the first round of the Peter McNulty Football Tournament.

Then on Sunday, January 8, both the senior footballers and hurlers will step into the fray as they begin their O'Byrne Cup and Walsh Cup campaigns respectively.

The footballers will be in Crettyard at 2pm (note venure change), where they will meet Dublin IT, while the hurlers are in Abbeyleix against NUI Galway.

On Wednesday, January 11th the senior footballers face an away trip to Wicklow for their second group game in the O'Byrne Cup. The group stages then come to an end in Stradbally on Saturday night against Meath in Stradbally.

The U-21 footballers are out on that day as well, against Tipperary, making it five games an eight day period for the Laois seniors and U-21s, who train together under new manager Peter Creedon.

The hurlers second game in the Walsh Cup is on Sunday, January 15 in Rathdowney against Dublin IT, before they meet Galway, also in Rathdowney, on January 22.

The footballers begin their league campaign with a home game against Louth on Saturday, February 4th at 7pm, while the hurlers start a week later, Sunday February 12th, with an away trip to Kerry, before a home game with Offaly.