JANUARY - Sporting season gets up and running in Laois 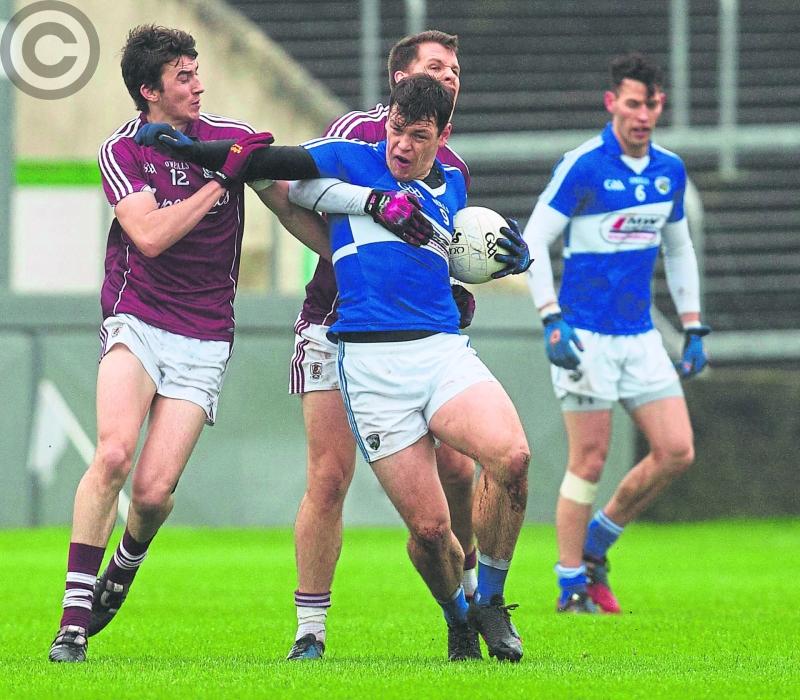 John O'Loughlin under pressure against Galway in the first round of the NFL in O'Moore Park. Pic: Alf Harvey.

As ever, the Laois sporting season got underway in the early days of January, as the O'Byrne Cup and Walsh Cup afforded players the chance to shake off the rustiness and begin their year in earnest.
The footballers, under the guidance of new manager Mick Lillis, opened with a win over UCD in Park-Ratheniska. They followed that up with another win, this time against Carlow, in a game that was played in a deluge in O'Moore Park, but their early season involvement came to an end when they lost to Meath in their third group game.
For the hurlers, they too opened with a win when they saw off Antrim in a high-scoring affair in Heywood, 3-17 to 1-19. A win over UCD followed, but defeat to Dublin meant that they too didn't progress beyond the group stages. Manager Cheddar Plunkett was trialling a whole host of players as he attempted to overcome the loss of a raft of key players to retirement, but as the season progressed, that lack of experience would prove costly.
While the senior teams were getting their seasons underway, the Laois U-21s were also in action, as they took part in the Peter McNulty Cup. An impressive win over Galway in the semi-final, 1-17 to 2-9, qualified them for the final, against Kildare in Annanough.
On a bitterly cold night, supporters were kept warm by a brilliant game of football, which went to extra time, as Kildare won 2-15 to 2-13.
The Laois senior footballers would eventually begin their league campaign late in January, and it was an ominous beginning, as they lost 3-12 to 1-10, having trailed 2-6 to 0-1 at half time. Early season optimism was being tempered now, as fans began to worry about what they had season.
The Laois ladies footballers also got their league campaign under way in January, and in what would turn out to be a topsy-turvy season, they lost their opener to Clare, 4-9 to 1-4. There was better news on the Ladies Football front through when Sarah Phelan, a student in Scoil Chríost Rí Portlaoise was named the 'Secondary Schools Player of the Year', while Joyce Dunne from Sarsfields was given an LGFA College Scholarship.
In hurling, Mountrath CS began their first ever schools Senior 'A' campaign, and they raised eyebrows early on when they beat Castlecomer 4-15 to 2-14 in Dunmore. They followed that up with a 1-16 to 0-8 win over Colaiste Eoin of Dublin to qualify for the semi-final.
In Basketball, Scoil Chríost Rí suffered All-Ireland heartbreak when they lost to Holy Faith Clontarf in the National Arena in Tallaght, while the Portlaoise Panthers senior womens team were suffered two losses in the national super league.

“We've changed our team around a lot, we know we've got to completely reshape our team, this is going to be a new Laois team really."

- Cheddar Plunkett after the Walsh Cup loss to Dublin. Even in early January, Cheddar knew the task which awaited him.

"Portarlington RFC exists to ensure a positive sporting experience is available for everyone in the community and people of all physical abilities. We have children in the club who have learning and physical disabilities but they can still play rugby, but the ban on goggles means we can't offer rugby to children who need glasses."

- Portarlington RFC PRO Barry Lambkin, after the club had a Minis game called off due to the introduction of players wearing protective goggles, which are banned by the IRFU.

"With a strong panel in place, and a Laois manager at the helm, everything is in place for a successful season, so hopefully the league struggles of recent seasons are put to bed, and the county can start the climb back to the top once more."

- From the Leinster Express preview of the National Football League. We were nothing if not hopeful.

“We just didn't get out of the blocks, we just didn't get going, we didn't seem able to string a few passes together and keep the ball. I'm not really sure why that was, maybe it was nerves, I don't know, maybe we built it up too much, but whatever the reason was, it just didn't seem to happen for us.”
- Laois football manager Mick Lillis after watching his side slump to a heavy loss against Galway in the opening round of the NFL.