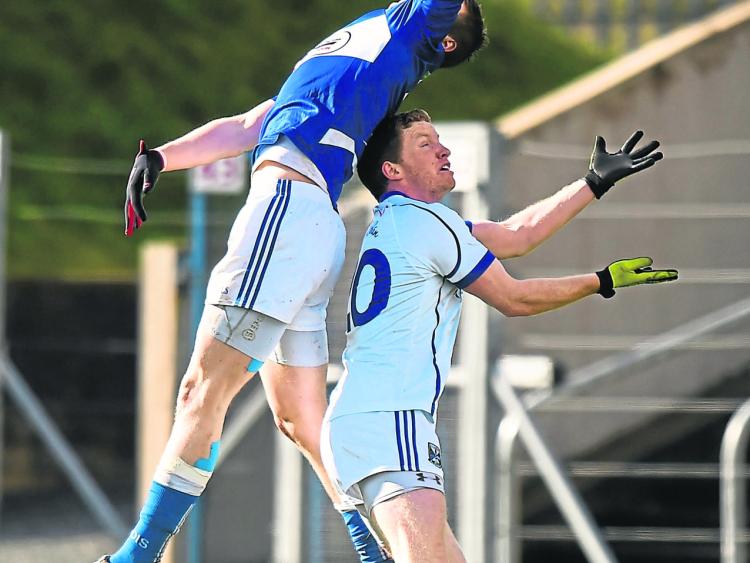 March may be relatively early in the season, but it was still an incredibly busy month in Laois sport.
The woes of the senior footballers and hurlers continued, as neither side managed to win a game in March. The senior footballers lost to Fermanagh 1-17 to 0-10, drew with Derry in a madcap game 5-10 to 1-22 before losing to Cavan, 1-17 to 0-15 in Breffni Park.
The hurlers were performing a bit better but still not getting results, as they put in decent showings against Clare and Wexford, but were well beaten by Limerick, 6-29 to 1-15 in the Gaelic Grounds.
The U-21 footballers beat Wicklow in O'Moore Park to qualify for a Leinster semi-final against Dublin, but the Leinster kingpins beat them 2-17 to 2-5 in Parnell Park. On the same day and at the same venue, the Laois minor footballers lost out in the Leinster league final to Dublin 1-15 to 0-9.
Scoil Chríost Rí won the All-Ireland Junior 'A' football title in March, as they outclassed St Ronan's from Lurgan to seal a 5-10 to 1-9 victory, with Emma Lawlor scoring 5-2. The school also won the All-Ireland U-17 Schools soccer title, scoring four goals in 15 minutes to beat Pres Thurles 4-0.
It was a great month for Shane Ryan, as the Port swimmer reached the Qualifying time for the Rio Olympics in the 100m backstroke at the Swim Ulster Dave McCullagh Meet in Bangor.
In rugby, Portlaoise won Division 2A of the Leinster League, wrapping up the title with a 22-15 win over Newbridge. Their Seconds team won their league on the same day, also beating Newbridge. This month also saw Alison Miller run in a hat-trick of tries for the Irish ladies team against Scotland.
March was also a busy month for basketball, as Portlaoise Panthers U-17 girls team beat Liffey Celtics 58-55 to win their first ever Dublin League title. Their senior ladies team also beat Liffey Celtics, 57-55, to secure their place in the National Super League for the 2016/17 season. Portarlington Kestrels beat Old Leighlin 65-53 to win the Mens Midlands Cup, while Clonaslee beat Portlaoise 52-48 to win the Ladies Midlands Cup.
It was a good month also for Ruby Millett (St Abban's) and John Ikpotokin (St Michael's), as they won Leinster and All-Ireland Indoor Championship medals, with Ikpotokin setting a new record time in the Leinster 60m final.
In soccer, Portlaoise U-13 soccer team saw their incredible run in the SFAI Cup come to an end at the quarter-final stage, as they lost 3-1 to Belvedere in Rossleighan.

“I've been saying it for the last few weeks though, it's going to take a few matches for us to find our rhythm and find our best team, and we'll be making a few further changes for next week and looking at few other things.”

- Cheddar Plunkett after a wasteful Laois lose again, this time to Clare.

“I don't know what facilities they have to train in, but we've played no football, as such, in training because we haven't the facilities to do it, and I'm not using that as an excuse."

- Mick Lillis after Fermanagh, offering no excuses after Laois were well beaten in Enniskillen by Fermanagh.

“Now, I would say the pitch is a contributory factor, and I think they have a massive advantage here on the pitch, and I'm not using that as an excuse, but it is an absolute bog."

“The dressing-room after that game was a pretty miserable place to be and at the time I genuinely wondered whether or not a lot of those girls, who are involved in a lot of other sports both inside and outside the school, would have the appetite to give it another go this year. I keep saying it to them but they have always answered every doubt we’ve ever had of them.”

- Scoil Chríost Rí soccer manager Tom Moss after his side came back from losing an All-Ireland final the year before to beat Presentation Thurles in the All-Ireland U-17 final.

“It was a topsy-turvy game, but to concede five goals is criminal, it's so disappointing."

- Cheddar Plunkett tries to keep the faith after a heavy defeat at the hands of Limerick.

"It's the psychological thing of getting these lads up that's going to be the big thing.”
- Mick Lillis after Laois' loss to Cavan meant their fate in NFL Division 2 was no longer in their hands.