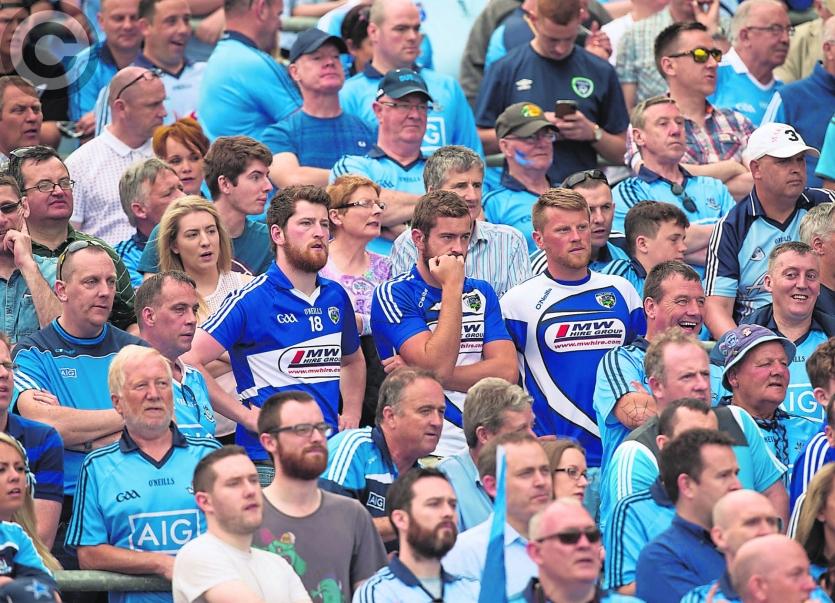 The much criticised Leinster SFC clash between Laois and Dublin in Nowlan Park took place in June, and it proved to be as disappointing and frustrating as many predicted.
Nowlan Park failed to sell out for the game, and the early stages were ominous for Laois. Dublin swept forward from the throw-in and had the ball in the back of the net within 15 seconds. Another goal followed soon after, and by half time Dublin lead 2-12 to 0-7, while Laois had been reduced to 14 men after John O'Loughlin was shown a red card.
That might have signalled a complete landslide, but Laois played some of their best football of the year in the second half, spurred on by a brilliant goal from Stephen Attride. Paul Cahillane raised another green flag from the penalty spot, and while Dublin were never in any real danger, Laois did restore some pride with their second half performance. The final score was 2-21 to 2-10.
Unfortunately for Laois, there would be controversy after the game, when Gary Walsh released a statement on Twitter criticising the management team for dropping him from the panel. Walsh referenced his reaction to being substituted as the reason he was dropped, having only missed one training session all year.
The story gained traction nationally, and Walsh was eventually reinstated to the panel after issuing an apology, and was there to face Armagh.
In a scrappy game, Laois battled to a 1-10 to 0-10 win, a huge result for them. Little did they know, however, they would have to do it again. The introduction of Shane Murphy late on meant Laois used too many substitutes, and they would eventually be ordered to replay the game.
The Laois senior hurlers were also in action in June, as they began their Leinster SHC campaign with a trip to Tullamore. The home side were out for blood having suffered a crushing defeat to Laois the year before, and they exacted their revenge on Cheddar Plunkett's side.
After an evenly contested first half, Offaly blitzed Laois after half time, eventually romping to a 3-22 to 1-14 win, as Laois' lack of experience once again came to the fore.
With both the footballers and hurlers out of provincial competition, they were dealt a blow when Evan O'Carroll and Picky Maher headed for America for the rest of the summer.
The Laois ladies footballers also got their Leinster championship started in June, as they suffered a heavy defeat to Dublin in Round 1. They followed that up with a draw against Meath, achieved in remarkable circumstances. Trailing by eight points with six minutes left, Laois fought back to level the scores at 3-6 to 2-9. Their final game in the month saw them lose to Westmeath 2-12 to 1-11.
On the club scene, Arles-Kilcruise were relegated from Division 1A of the ACFL, with The Heath and St Joseph's qualifying for the final. In hurling, the performance of the month went to Cha Dwyer, who scored 3-10 in Ballinakill's win over Clough-Ballacolla.
At the National Féile finals in Tipperary, Abbeyleix won the Division 2 final against JK Brackens from Tipperary, while the Laois U-17 hurlers lost out to Waterford in the Division 4 final of the Celtic Challenge tournament.
The Heartlands rally also took place in Laois during the month of June, while Portlaoise duo Eimear Corri and Louise Scully won caps for the Irish U-18 rugby team at the European Grand Prix.
The big story in the month, however, was that Portlaoise middleweight boxer Michael O'Reilly finally qualified for the Olympics. His path to Rio had been a winding one, but his gold medal, achieved at a qualifying tournament in Baku, Azerbaijan, was his ticket to Brazil.
It capped a huge effort from O'Reilly and his coaches to get him a seat on the plane, and he could now turn his focus to getting himself ready for the Olympics. Unfortunately for O'Reilly, and particularly Portlaoise Boxing Club, the chance to see a Portlaoise man box in the Olympics would not materialise.

- Mick Lillis on the challenge met by his Laois side after their games against Dublin in the Leinster SFC.

“The first-half we were very competitive. All of the things that we wanted to do in the first-half worked out for us. Obviously at half-time we were in a good position. The goal hurt us but generally teams would be able to take that in their stride and work a way back into it but certainly we lost our way in the second-half."

- Cheddar Plunkett reflects on a poor second half against Offaly in the Leinster SHC.

"My committment to the team was questioned cos I let a few f**ks out of me after being taken off against (the Dubs), which I was wrong to do but at the time I was just frustrated."

- Gary Walsh's statement on Twitter after he was dropped from the Laois senior football panel after the loss to Dublin.

"I want to thank the Laois Management for meeting me today and allowing me the opportunity to unreservedly apologise for my threatening behaviour towards my manager Mick Lillis in Nowlan Pk last Saturday evening."

- Gary Walsh's 'few f**ks' are upgraded to 'threatening behaviour', as he issues an apology and rejoins the Laois panel.

“It was a real humdinger, the tension, the play was up and down the field, the excitement, the hits, you could nearly feel them yourself on the sideline and in the stand. It was just a real championship match"

"I think it chose me to be fair. Being 6’4’’, lean and powerful it was a perfect match. Having said that I did try out almost all track and field events (Never a fan of cross country though)."

- St Abban's athlete Barry Pender on how he ended up with the High Jump as his chosen discipline.

“It’s been a long road since the Doha debacle when I didn’t get the decision. It was fierce hard to get my head around it and go back training, but I was confident in my own abilities. I trained harder, my coaches tweaked elements of my training and I was more confident than ever before going into last week's World Championships, and thank God it paid off."

- Michael O'Reilly after he won a gold medal in Baku to secure his place at the Rio Olympics.

"The feeling of pulling on the green vest is unlike any other, it instills a great sense of pride knowing that all the hard work, pain and injury is all worth it just for those 50 or so seconds of running in a green vest on a European or World stage."

- St Abban's hurdler Paul Byrne on what it means to represent Ireland at the upcoming European Indoor championships.