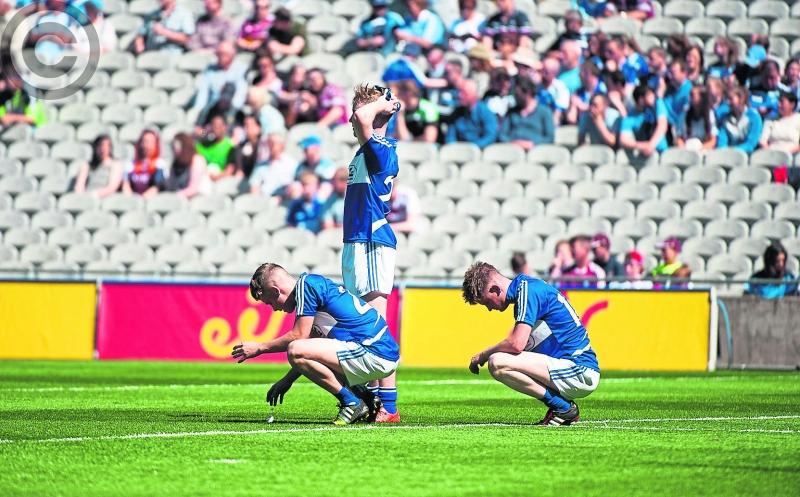 Laois minor footballers after their loss to Kildare in the Leinster MFC final at Croke Park. Pic: Denis Byrne

July was the month where Laois GAA fans could get all nostalgic, as they got to look forward to a minor football team contesting a Leinster final.
Nine years after the county's last Leinster minor final appearance, Mark Rooney's charges steamrolled Offaly 1-15 to 0-6 in the semi-final in O'Moore Park to book their place in the provincial decider.
Awaiting them was Kildare, a bigger and more experienced side. Those two traits certainly came to bear on Leinster final day in Croke Park, with the Lilywhites winning 1-18 to 0-10. The final scoreline was a little harsh on Laois, but with a raft of players still under age in 2017, they could yet be back in Croker.
This wasn't the end of their season either, as they faced into an All-Ireland quarter-final with Galway at the end of the month. Once again the scoreline didn't do them justice as they lost 3-10 to 0-12, but after missing seven good goal chances, it was a frustrating end to the year for the team.
The senior footballers faced into their controversial replay with Armagh and edged home by a point, 1-11 to 1-10, having lead by seven at half time. The following week they travelled to Ennis to play Clare, and their season ended there and then, losing 0-14 to 1-10.
The hurlers also saw their season come to an end in Ennis, as they were hammered 5-32 to 0-12 by the home side, in what would turn out to be Cheddar Plunkett's last game in charge.
On the club scene, the Division 1 football and hurling finals took place in July, with The Heath beating St Joseph's in the football final, and Rathdowney-Errill beating Castletown in the hurling.
Those games preceded the start of the championships, which both began in July. In football, there were opening round wins for Portlaoise, Crettyard Gaels, Ballyroan Abbey, St Joseph's, ballylinan, Stradbally, Arles-Killeen and Arles-Kilcruise, while in hurling, Clough-Ballacolla, Camross, Ballinakill Gaels and Borris-Kilcotton all won.
July also saw Nicole Turner confirmed as a member of the Irish Paralmpics team heading to Rio later in the year, while Shane Ryan and Michael O'Reilly were fine-tuning their preparations for the Olympics in August.
St Abban's duo Paul Byrne and Barry Pender competed in the European Indoor Championships in July, representing club and country in Amsterdam.
In other sports news in the month, Laois Marlins sent a record number of swimmers, fourteen, to the Leinster IAG Division 1 Gala. In boxing, Joe Foran, Kasey Holohan and Joleen McInerney from St John Bosco club in Mountmellick all won medals at the prestigious Monkstown Boxing Cup in Dublin.

- Cheddar Plunkett reveals what goes into managing the Laois team as he reflects on the season after losing to Clare in the Qualifiers.

“We had a meeting on the Tuesday night after it was announced that the game was going to be re-fixed. We talked it out. We chatted it out. We had our speak, the players had their speak and we put it to bed and we didn't mention it since.”

- Mick Lillis on how he and his players coped with having to replay their game with Armagh after using too many substitutes in the first game.

“It's a bit surreal to tell you the truth, we are all still on Cloud 9. Someone in Portarlington won the Euromillions recently, but for us, we have won our lotto with this news.”

- Bernie Turner, mother of Nicole Turner, after she was selected on the Irish team for the Paralympics in Rio.

- Laois minor football captain Sean Byrne on the glory days of Laois' minor success, as he looked ahead to the Leinster final.

“It’s a full time job. If you take the bigger teams like Dublin with 30 in their back-room team, you have a way of delegating responsibilities. Your average county team has a small back-room team and that’s just the way it is, we’re not complaining. It is full on.”

- Mick Lillis on the challenges faced as an intercounty manager, after Laois lose out to Clare in the All-Ireland Qualifiers.

“Kildare had the experience of being here last year, and they have very good forwards, and the space in Croke Park left us exposed at times. It's hard to analyse at the moment and hard to take, but that's sport.”

- Laois minor football manager Mark Rooney after their loss to Kildare in the Leinster MFC final.

“It is with regret that I wish to inform you that I will not be putting myself forward for consideration as manager of the Laois senior football team for the coming season."

- Mick Lillis announces his decision to step down as Laois senior football manager.