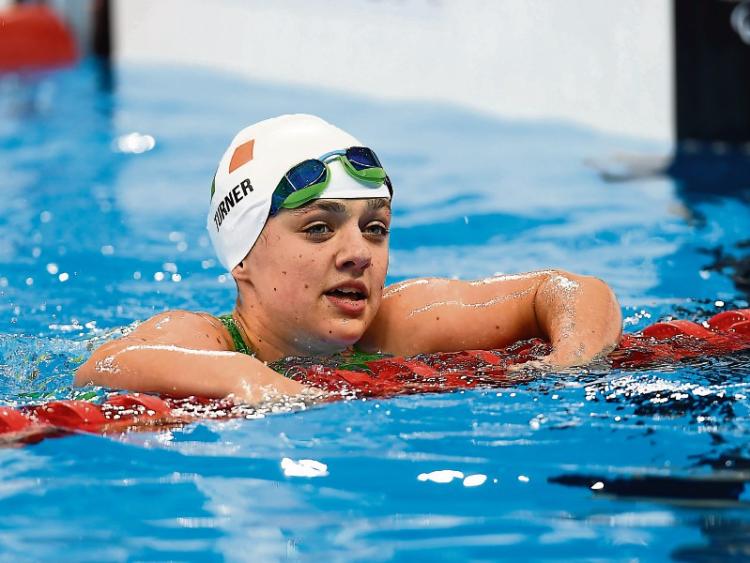 Nicole Turner after one of her races in Rio.

The month of September was dominated by one athlete - Nicole Turner.
The young Portarlington girl followed up on her stellar displays at the European Championships earlier in the year to qualify for five finals at the Paralympics. She contested finals in the 50m Butterfly, 50m Freestyle, 200m Individual Medley, 400m Freestyle and 100m Breast Stroke.
Only exhaustion stopped her from going for a sixth, as she was advised to skip her last event, but it made little difference to her mood or her overall achievements at the games. Having been just ten years old at the time of the London Paralympics, it was a remarkable rise for Nicole, who will be targeting the 2020 games in Tokyo next.
To cap off a wonderful games, she was then selected as the flag-bearer for Ireland in the closing ceremony, before returning to a heroes welcome in Portarlington.
September also saw Laois hurling plunged into crisis when Cheddar Plunkett resigned, purportedly due to Laois GAA not sharing the same vision as him for the future of Laois hurling. Having just appointed Peter Creedon as football manager, it meant Laois officials had to begin the hunt for a manager all over again.
In local sport, the club championships continued through the month, with one of the biggest surprises of the year coming in the SFC. The relegation playoff pitted The Heath, who had won the league just two months earlier, against Emo, who had almost beaten Portlaoise in the final the year before. After a tense encounter in Portarlington, Emo were eventually relegated.
In the knockout stages, St Joseph's recorded a rare draw with Portlaoise thanks to a brilliant last-gasp free from Colin Campion. Portlaoise won the replay, and joined Stradbally, Crettyard Gaels and Arles-Killeen in the last four.
O'Dempsey's replaced them in the SFC, as they recovered from trailing 1-12 to 0-7 with 47 minutes on the clock to beat Timahoe 1-13 to 1-12 in the intermediate final.
In hurling, Castletown won the SHC 'A' title thanks to a last-minute point from James Hooban, while in the senior championship, both semi-finals ended level.
When the teams reconvened, Rathdowney-Errill edged out Camross and Borris-Kilcotton did likewise to Ballinakill Gaels, to set up a first-ever SHC final meeting between the pair. And what a final it would turn out to be.
Sarsfields dashed Portlaoise's hopes of a first ever Laois Ladies SFC title as they racked up another win.
Eimear Corri was on the Irish 7s team which won bronze at the Sainsburys Schools tournament in the UK, with plenty more to come from her.

“I'll consider it my biggest achievement to date if we win the final this year. In the past few weeks our panel has been cut from 27 to 22 with injuries."

- Sarsfields manager Alan George in the preview for the Ladies SFC final against Portlaoise, after the club lost a whole host of players to injury.

“It’s a big deal for us to reach our clubs first ever senior final and we know there’s going to be nerves. For Sarsfields they’ve been here many times before but we have to focus on ourselves and we’re keeping things as normal as we can at training but there’s excitement too, we are really looking forward to the challenge.”

- A statement, made by Laois GAA via Twitter, announcing the departure of Cheddar Plunkett. They issued no other statement.

“The County Board should have done everything in their power to make sure that man stayed on. Maybe he needed to change around his management team a small bit or freshen it up, but to let a man that loves Laois hurling so much go, I think it is a disaster altogether. I don't know the ins and outs of it, but we can't be affording to lose lads like that.”

"The fact that it is a replay probably heightens it a bit too, and I’d be very competitive - after 2008 and 2012 I still wanted to do an All-Ireland.”

- Maurice Deegan on getting the nod to referee his third All-Ireland final.

"It is very easy to do (train for the Qualifiers) that when you are regularly playing in League, Leinster or All-Ireland finals but when that prize is not as closely within your reach, then it needs much greater character and love of place to commit yourself to the task."

- Cheddar Plunkett, in a statement to the Leinster Express, paying tribute to the players after his shock resignation.