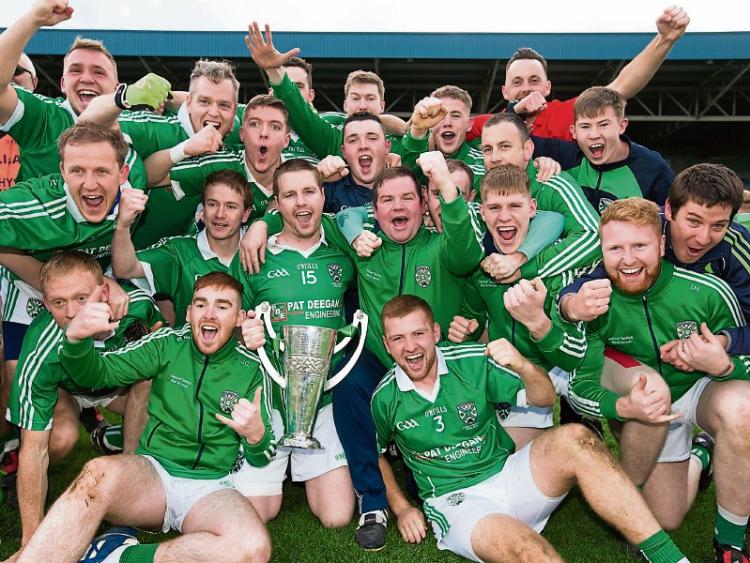 October was dominated by two utterly remarkable county finals, as the club scene came to a dramatic climax in Laois.
The first of them was the senior hurling final between Borris-Kilcotton and Rathdowney-Errill. Hopes were high of a good game prior to throw in, but no one could have expected what played out in O'Moore Park.
A breathless, swashbuckling, free-scoring, frenetic and dramatic game played out in front of an enthralled crowd, as both teams slugged it out on the scoreboard. The score at half time was 1-17 to 2-14, with Neil Foyle scoring the goal of the year in the first half and points raining in from everywhere.
The second half was equally dramatic, although the scoring slowed a little. Neil Foyle's second goal put Borris-Kilcotton five clear, but Rathdowney-Errill fought back at them, as Ross King and some outrageous points from Tadgh Dowling got them back on level terms. Borris-Kilcotton went two clear again, but Ross King pointed twice in injury time to send it to a replay.
The second game was a fine game in its own right, but not as good as the first. Borris-Kilcotton found the extra gear they needed to seal a 1-18 to 2-10 victory, and first ever county title.
The football final certainly didn't lack for drama either, as Stradbally denied Portlaoise ten titles in a row with as good a goal as you were ever likely to see. Trailing by two points in injury time, they won the ball in their own full-back line and worked it all the way up the field, getting it to Jody Dillon 20 yards out.
The rest, as they say, is history, as he curled an unstoppable shot into the top corner of the net to seal the title for Stradbally. They went on to represent Laois in Leinster later in the month, but a red card for Darren Maher scuppered their chances, and they lost out to Longford champions Mullinalaghta.
It was a month to remember for Rosenallis as well, as they won two county finals. First up, their footballers beat Park-Ratheniska by a point in the JFC final, 1-9 to 0-11, while their hurlers had things a little easier in the IHC final, beating Clough-Ballacolla 1-20 to 0-9.
Slieve Bloom won the JHC title as 1-14 from Ben Conroy helped them past Rathdowney-Errill, while O'Moore's won their first even camogie title, beating Camross 2-6 to 0-9.
In other GAA news, Eoin Reilly was appointed captain of the Irish team for the upcoming Shinty/Hurling international, and was joined on the panel by Cha Dwyer. Enda Rowland was on the U-21 team.
Sarsfields saw their hopes of Leinster glory ended by Foxrock-Cabinteely in Bray, while the Cumann na mBunscol football finals also took place, with Holy Family NS and Emo NS winning the boys and girls Division 1 titles respectively.
In soccer, the Portlaoise ladies team won the Joe Rooney Cup Final with an emphatic 7-1 win over Edenderry, while in Pool, Ryan's of Portlaoise retained the Laois Pool League title.
Portlaoise Panthers senior womens team got their season in the Super League up and running with a defeat to Glanmire, but better days were ahead for them.

“We just came out of the blocks and gave our very best, fair dues to both teams, Rathdowney-Errill were fantastic too and no team probably deserved to lose."

“Fair play to both teams for producing that, you were never going to get that much intensity in the second half, but both teams stayed at it, and in fairness to our boys it looked like it was gone, but they showed a lot of guts to come back and get the draw. It's all to play for again.”

- Rathdowney-Errill manager Brian Young gives his take on the game.

"You couldn't write the script, it was an unbelievable finish to the game."

- Stradbally manager Martin Murphy after their remarkable win over Portlaoise.

“We are absolutely over the moon, the manner of the victory, it'll probably take a day or two to really sink in. But to sum up my emotions... look around, this is unreal, it's unreal.”

- Stradbally chairman John Delaney on their remarkable win over Portlaoise.

"There were some inspirational scores there at the end, unbelievable scores, absolutely tremendous, and we're just delighted to get over the line.”

- Borris-Kilcotton manager Ken Hogan on the strong finish from his side to claim their first Laois SHC title.

“I think this is our eighth or ninth game, we've had three replays, there will be books written about this!"

“What an amazing feeling. In 2011 we came together with a plan, with a dream. It's been a long few years, but finally we've come to the summit. What a feeling.”