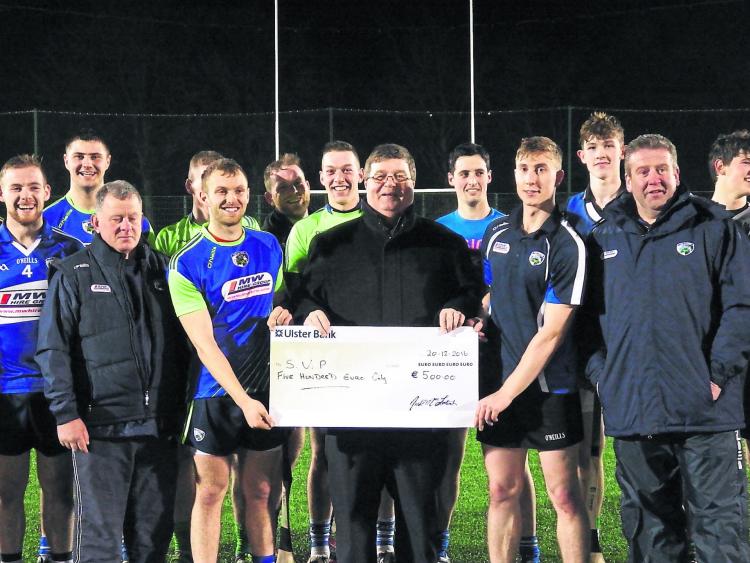 The Laois senior and U-21 hurlers making a donation of €500 to the Laois branch of St Vincent de Paul.

As the year entered it's final month, the action may have slowed down, but it certainly didn't stop.
Portlaoise RFC graduates Eimear Corri and Niamh Griffin were making waves with the Leinster Ladies rugby team, as they helped them claim the interprovincial title thanks to a 21-15 win over Munster in the final round of games.
Another Laois duo, Alison Miller and Tara Buggie were lining out for Connacht at the same time as they took on Ulster, with Miller scoring a hat-trick. However, it wasn't enough to stop Leinster dethroning Munster.
It was still a busy month on the GAA front, as Borris-Kilcotton capped a brilliant year for them by beating Clough-Ballacolla in the U-21 final. Rosenallis saw their remarkable season come to an end in Edinburgh, as Dunedin Connolly's beat them in the All-Ireland JFC quarter-final.
The Laois GAA Convention also took place, with a surprise result in the race for the Vice-Chairman's position, as incumbent Peter O'Neill was ousted by Sean Mortimer. Every other officer was returned unopposed.
In Handball, Paraic Buggy confirmed his title as the best male handball player in the county thanks by claiming the Laois senior title.
In Kettlebells, Laois duo Dermot and Andrea O'Neill won gold medals at the Kettlebell Marathon World Championships in Denmark.
The year was rounded off by a lovely gesture from the Laois senior hurling panel, as they decided to forego their usual after-training meals and instead donate the money normally spent on the food to the Laois branch of the St Vincent de Paul.

"It's unbelievable really how close it was, but that's the luck of the draw."

- Sean Mortimer, after the Camross man scored a surprise win over Peter O'Neill to be elected vice chairman.

“It was once an honour to represent your club, lads would be jumping out of their skin to do something for their county. Now, we can hardly get people to fill positions, they ask 'what's in it for me?', or 'what expenses are there for me?'”

- Laois GAA Chairman Gerry Kavanagh on the difficulties in attracting people to positions in Laois GAA.

“We think he reffed more games than we can confirm, he would have refereed some of them under an assumed name, because he was on the run from the Black and Tans.”

- Christy Dunphy, grandson of 1916 All-Ireland final referee Pat Dunphy, on the troubles he faced trying to referee games during a turbulent time in Irish history.

“The Laois athletes have worked very hard, and we are very proud of their development and athletic performances this year."

- Teresa Wilson from Nuparc Wellness on the improvement on Laois athletes under their guidance.