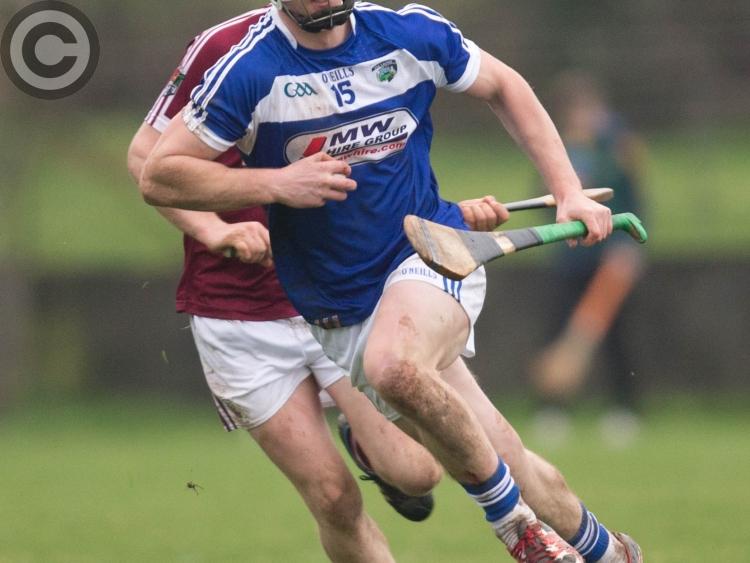 Ross King on the attack for Laois against NUI Galway.

New Laois manager Eamonn Kelly got off to a winning start on Sunday as his young Laois team showed great heart to battle back to defeat NUIG.
Kelly’s regime couldn’t have got off to a worse possible start as NUIG raced into an early 0-6 to 0-1 lead. Laois’s solitary scorQe in the opening exchanges came from Aidan Corby as NUIG looked far the sharper of the two teams.
Some excellent timed runs opened up space in key areas and twice they exposed gaping holes in Laois’s defence with cross field balls which led to easy scores. Corner-back Ger Forde was running the show for the Galway college and even managed to get his name on the score sheet twice in the first half with two excellent points. Laois’s shot selection was poor and they quickly racked up the wides with a couple of missed frees adding to their woes.
Deep into the first half Laois were trailing 0-11 to 0-2 and things were looking grim. Paddy Purcell got Laois’s third point after he gathered, powered through the middle and pointed excellently, and this seemed to wake Laois up.
Two PJ Scully points were followed by a super goal from Ben Conroy who cut in from the side and finished neatly under Cathal Tuohy. NUIG got a point back before the break but it was Laois that went in the happier of the teams at half time, only trailing by four despite being outplayed for the majority of the half.
Laois were late emerging from the dressing rooms for the second half and whatever was said by Kelly and his management had the desired effect, as Laois carried on where they left off at the end of the first half.
Sean Downey opened the scoring with a good point before Aidan Helebert responded with a free, but from then on it was all Laois. Three PJ Scully points in a row was followed by an excellent goal, and suddenly Laois were in the driving seat.
The goal came from Wille Dunphy after Aidan Corby who was unlucky to see his low drive hit the post, but Dunphy was on hand to strike the rebound to the back of the net.
This was followed by another Laois goal which more or less wrapped up the game. Good initial work from the impressive Wille Dunphy saw him pass to Ross King, who bounced the ball into the corner of the net to give Laois a five point lead.
An NUIG comeback looked like it might be on the cards after two quick points following the goal left them within three, but it wasn’t to be as Laois closed out the game with PJ Scully in particular leading the way with some great scores to give Eammon Kelly the perfect start as Laois manager.