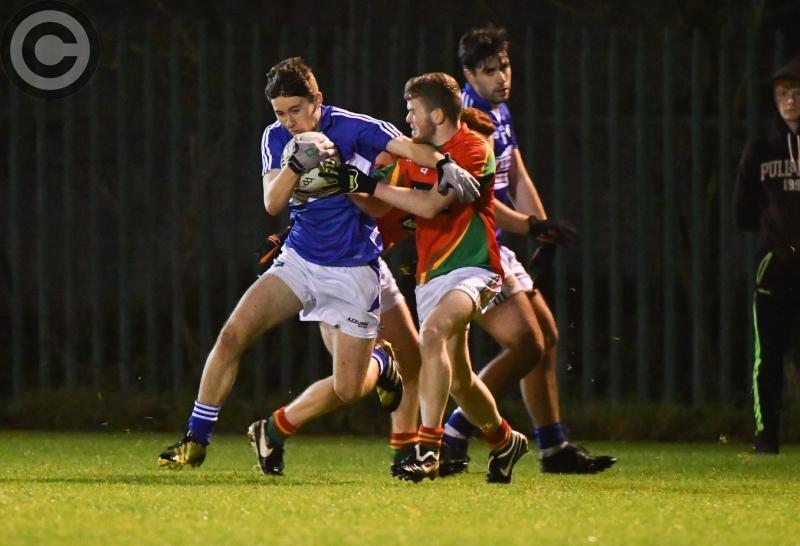 A late goal from Courtwood's Alan Kinsella helped the Laois U-21s open their season with a four point win over Carlow last Friday night in Portlaoise.

Carlow looked like they were going to get at least a point out of the game late on, but a breakneck counter attacking move from Laois caught Carlow out at the back, and Kinsella netted the goal to give Gary Kavanagh’s charges their desired start.

Laois kicked off the scoring with the splendid Sean Moore pointing. This would be the first of eleven points kicked from the boot of Moore, who was outstanding throughout. Carlow levelled soon after through Shane O’Neill, who would also be Carlow’s main scorer, with eight of their twelve points kicked by the wing forward.

The two forwards matched each other, with frees being popped over from both ends to make it two points apiece. Sean Bambrick gave Carlow the lead, but Laois would fire back with four unanswered scores, including the first goal of the game. A Moore free was sandwiched between two points from play from the same man, before centre back Eoin Buggie finished coolly into the back of the net.

Carlow brought the game back to three, with Sean Bambrick and O’Neill kicking scores. The sides would then match each other score for score, and as the half time whistle went Laois were up by a goal. Laois would come out after the break on the front foot, with three scores kicked without reply. Centre back Eoin Buggie would add to his earlier goal with a point, before two Moore frees gave Laois a six point advantage.

Carlow responded with an O’Neill free, but Moore would hit back for Laois with one from play. O’Neill again would reply for the away side, but Moore put daylight between the sides kicking over two more points. At this stage, it looked like Laois would comfortably finish out the game. However, Carlow, to their credit, fought back.

A Damien Crooke goal would start the revival for Carlow, as a scintillating run from the wing back left Laois defenders in his wake and he slotted home. Two O’Neill points, one from play and one a free, would bring the scores back to three, with five minutes to play. Carlow were awarded a free with a mere three minutes to play, and O’Neill stepped up once again to fire between the posts.

Carlow looked hungry for a point to draw the match, but Laois’s defence held resistant, and the home side caught Carlow flat footed with a fast counter attacking move. Substitute Alan Kinsella was the goalscorer, as Moore’s deflected shot fell to the grateful hands of the substitute, and he made no mistake with the finish.