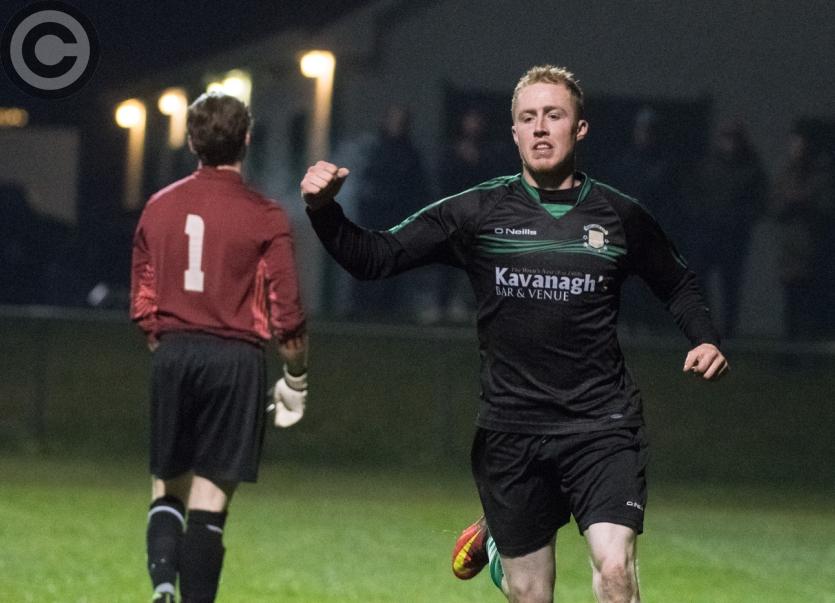 Portlaoise's first team got 2017 off to a stunning start on Friday night when they beat second placed Greenhills/Greenpark FC 6-1 following a near impeccable performance.

Greenhills and Portlaoise are old rivals going back over the last seven years, and the visitors were just pipped for promotion last season on goal difference and started the current season with eight wins from their first nine games.

On Friday night though they couldn’t live with Portlaoise as the home side tore into them from the start, and were ahead within two minutes. James Mullaney won the ball back and played it into Jason Murphy, he passed first time to Jody Dillon who set up Colm Poole to thread a superb through ball for Jimmy Dermody to slot home past Karl Doherty.

The home side should have gone further ahead when Murphy chased down what looked like a lost cause but he won it back and played Dillon in, but his shot went just over. Murphy went close on 19 minutes but was off target, before Colm Poole then went close from distance.

Just before the break Portlaoise should have gone further ahead following a Greenhills corner. Dermody broke forward and played Mullaney in on the run, he dribbled round Doherty but Audri Sondi cleared superbly off the line.

Portlaoise had keeper Mateusz Cwienk to thank with one of the saves of the season early into the second half when he somehow kept Danny Geraghty’s close range volley out, and soon after Portlaoise went 2-0 up.

Aaron Rafter won the ball back and Man-of-the-Match Colm Poole drove forward, played to Emmanuel Okpara who set up Fitzpatrick to play Murphy through for his first of the night and a great team goal.

The third followed soon after with a move that included Eoghan White, Mark Brennan, Dermody, Rafter and Murphy finished for his 13th goal of the season.

Greenhils went close to getting one back when a good flowing team move ended with Bobo N’Kanu’s shot clipping the outside of the post and wide. Murphy went close again with a brilliant run but his effort was just off target.

Mullaney went on another surging run and played in Rafter for his first of the night on 65 minutes, before Portlaoise went further ahead on 70 minutes. Martin Staunton did well to play in Rafter and he finished past Doherty while moments later it was 6-0. Mullaney drove forward again and he played in Oisin Fitzpatrick who played a one two with Staunton and finished expertly with his left foot.

Greenhills went close when centre forward Shane Molloy volleyed just wide, then Cwienk was at his best to turn over a volley from Molloy. However, with three minutes to go the visitors got a consolation when Sondi fired home from close range.

A key feature of the night was the introduction of brothers Brian and Robbie Ging in the second half, both are sons of former Portlaoise AFC great Paddy Ging. Paddy served the club in a number of different roles following his retirement and on Friday night he must have been a proud father to see his sons play for the first team together for the first time.

Portlaoise are back in action on Friday night when they host Inchicore Athletic, who are just behind them in the league table having won their last five games in a row, it promises to be another thriller.