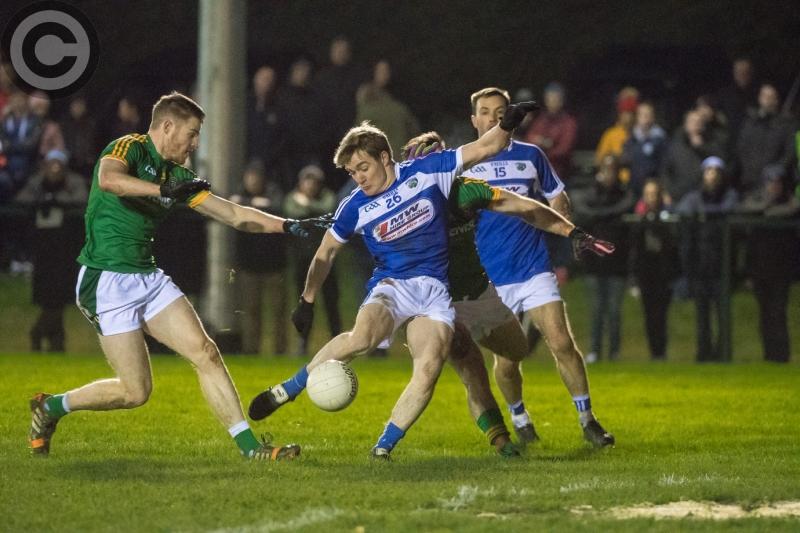 David Conway, Laois about to shoot at the Meath goal in their O'Byrne Cup clash. Photo Denis Byrne.

Laois were denied a place in the semi-finals of the O'Byrne Cup as a controversial late penalty saw Meath proceed at their expense.

Kieran Lillis was deemed to have fouled his man off-the-ball (said ball was in the middle of the field at the time), and referee Fergal Smyth awarded Meath the spot-kick.

Kevin Ross sent it loss past Graham Brody, and so Laois, even though they drew level thanks to a fine score from Colm Begley, were knocked out on scoring difference.

It was a disappointing end to the game, but the reality is that it isn't all that important. What Laois supporters will take from this game is the performance, and it will have left many of those present hopeful of what this team could produce this year.

While this may have been an O'Byrne Cup in mid-January, and both teams were not full-strength, it was still a great game to watch. There were some fantastic scores and it was played at the intensity of a league game, as both teams clearly wanted to win.

Donie Kingston, stifled and starved of possession for much of the opening half hour, was outstanding thereafter, kicking 1-4 and forcing he withdrawal of his marker early in the second half.

The worry for Laois will have been their first half performance, as they fell eight points behind at one stage. It's not something they'll want to make a habit of, but the fact they fought back so well, and were by far the better team in the second half, was hugely encouraging.

Meath had started brightly, and jumped into an early 0-3 to 0-1 lead, as Laois could find no real rhythm to their play. When Cillian O'Sullivan's shot then deflected in off Alan Farrell, the Royals were well on control, and they just kept pulling away. Graham Reilly was running riot at centre-forward and with 30 minutes gone, they lead 1-9 to 0-4.

Laois finally sprung to life after that, as Gary Walsh (free), Sean Ramsbottom and Donie Kingston all pointed in quick succession, and the momentum of the game completely shifted. Three more Laois points before half time drew one reply from Meath, and just the goal separated the teams at the break, 1-10 to 0-10.

When Donie Kingston hammered in a goal three minutes after the restart, Laois were well and truly on tip now, and although it was a low-scoring half, three more points from Kingston had Laois two points up with normal time elapsed, 1-15 to 1-13.

It looked like that was to that, but then Fergal Smyth spotted a foul that no one else in Stradbally seemed to see, and Meath were afforded the chance to book their place in the last four. They duly took it, but Laois won't dwell on that for too long.