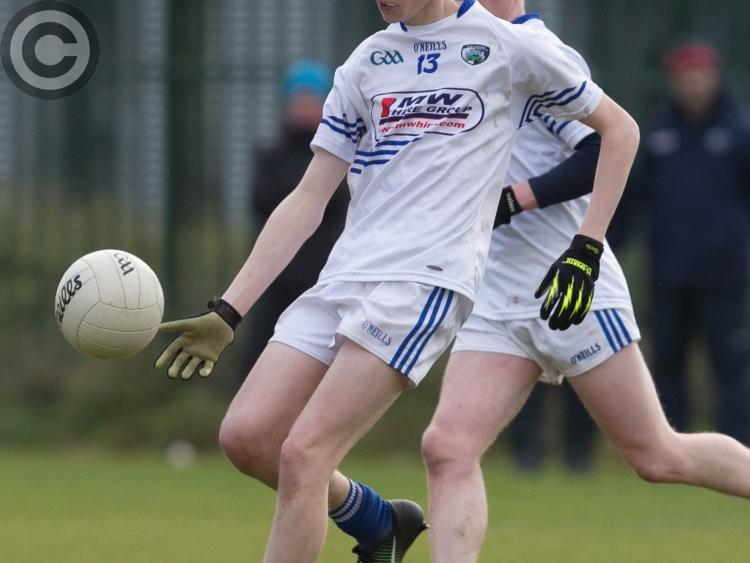 A Sean Moore inspired Laois got the better of Tipperary in the second round of the Peter McNulty Cup in Portlaoise on Saturday.

A ten minute spell at the beginning of the second half, during which they outscored their opponents 2-4 to 0-1, was enough to give Laois their second win of the tournament.

The game started slowly in cold conditions with both teams looking well organised in defence as both were quick to funnel men back after losing possession. It was Tipperary who opened the scoring from a placed ball as Jack Kennedy pointed from close range for the only score of the opening ten minutes.

Laois then began to ramp up the pace of their attack, in particular their transition from defence to attack, and by incorporating more kick passes they soon started to open up the Tipperary defence.

Brian Bryne opened his and Laois’s account with a good score off his right and this was followed by a 45 from Brian Daly after Ciaran Barrett had kept Laois out with a good save diving low to his right.

Laois began to turn on the style now and scored the next four points. Two beautiful outside of the foot efforts from Sean Moore and two great team scores sandwiched in between gave Laois a five point lead. Tipperary however closed out the half the stronger, scoring four points in the closing stages to leave just one between the teams at the break despite Laois dominating for large periods.

Laois sprinted out of the blocks at the start of the second half scoring three quick points through Moore (2) and Daly. A Kennedy point stemmed the bleeding but then two Laois goals killed the game as a contest.

First Daly got in front of his man and the keeper to fist a long ball to the net and this was followed by Byrne palming into an empty net after brilliant work from Moore to set him up.

A brief resurgence from Tipperary followed as two points from Kennedy and then a goal after a lapse in concentration at the back was followed by another Kennedy point. This saw the gap cut to just four points.

This, however, was as good as it was going to get on the day for the Premier men as new personnel entered the fray on both sides Tipperary’s momentum was halted and Moore took over for Laois to see his side over the line.

He scored three of the his side's last four points with Tipperary only able to muster one score in the closing stages through Kennedy as Laois held on for an impressive win and team performance so early in the year.