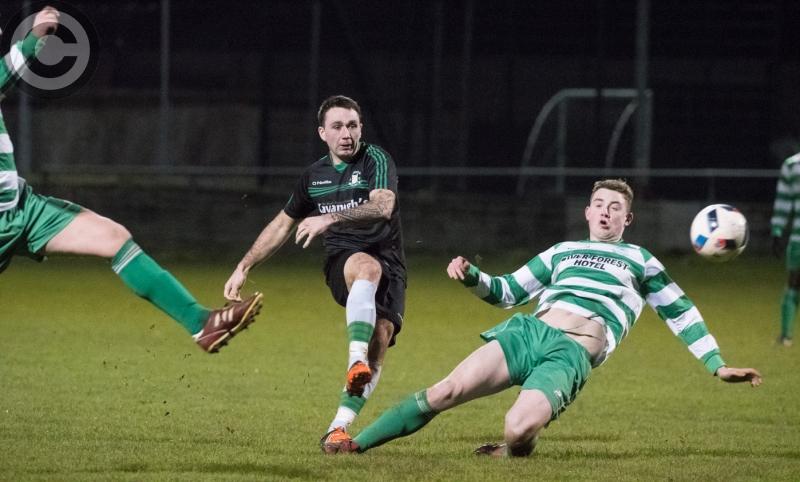 Portlaoise went two points clear of St James’s Gate in LSL Division 1B on Friday night, thanks a 2-0 victory over a stubborn Confey team in Rossleighan Park.

The visitors made it difficult for the home side to break through their resilient defence, but once they did, Portlaoise dominated the rest of the match, with the aid of Confey going down to ten men.

Both sides had chances during the opening few minutes, with Bruce Keenan of Confey seeing his shot go straight at Portlaoise keeper Mateusz Cwienk, and Jody Dillon’s header finding the same result down the other end. Portlaoise had the first big chance of the game when a devastating cross was launched into the box by Paul Cahillane. Forward Jody Dillon completely mistimed his header, and Oisin Fitzpatrick sliced his shot well wide.

Portlaoise had another great chance minutes later, with a blissful back heel from James Mullaney releasing Jason Murphy, but again the finishing was absent. Confey had their best chance of the game so far, but Mateusz Cwienk made a solid, routine save to keep out Mark Keenan’s effort. Both sides had several half-decent chances before the interval, but neither keeper had much work to do.

Portlaoise looked the better of the two teams, their fitness and passing really showing at times in the first half, but they still went in level during the half time break. After the interval, Emmanuel Okpara set up substitute Gary O’Sullivan, who was unable to get anything on the delivery. Again, Portlaoise with probing, with a slick one-two being played between Jason Murphy and Dillon, resulting in Murphy’s first time shot sailing over the bar.

Portlaoise were getting closer, this time with another substitute, Aaron Rafter going one-on-one with Confey keeper Brian Spillane, Spillane spread his body out and smothering the shot. However, Portlaoise finally broke the deadlock when Cahillane sent Murphy through, and a composed finish gave the home side the lead just after the hour mark.

It went from bad to worse for the away team, as they seemingly lost their heads, with frustration creeping in. They were reduced to ten men when Bruce Keenan head-butted Cahillane, and he had no arguments with receiving his marching orders. Aaron Rafter looked to make it two for Portlaoise, after a breakneck counter attacking move caught Confey out. Emmanuel Okpara played a quick through ball to Rafter, but he fluffed his lines.

Portlaoise would, however, get their second goal in stoppage time. Rafter would make up for his effort, with a looping header from a James Dermody cross, giving Portlaoise their eighth win of the campaign.