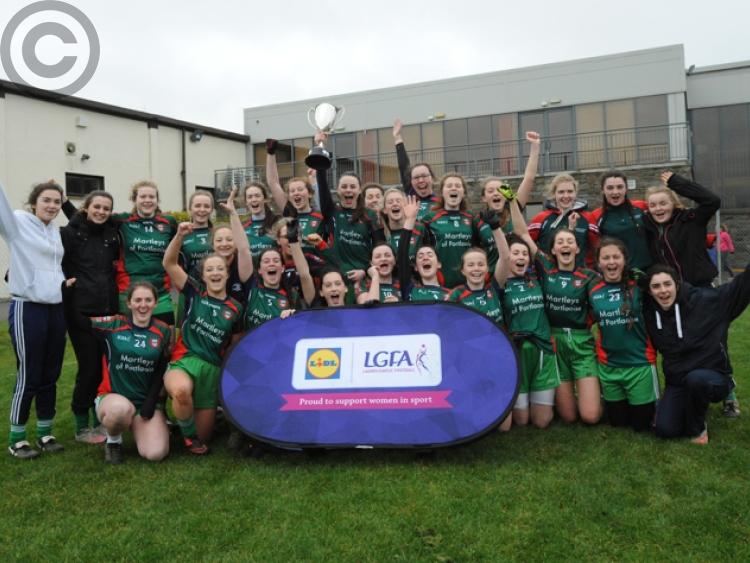 Scoil Chríost Rí Portlaoise are the Leinster Ladies SFC 'A' champions after a hard-fought five-point win over Colaiste Íosagáin, Stillorgan on Tuesday in Clane.

The Portlaoise school lead by just a point at half time, and were probably a little lucky to even hold that lead, having found Colaiste Íosagáin tough opposition in the first half.

The Dublin school had beaten Scoil Chríost Rí by four points in last year's Leinster semi-final, and this team had won the All-Ireland Junior 'A' title two years ago as well. All of that counted for little, however, as a controlled second half performance got Chríost Rí over the line.

Her direct running from midfield was causing Chríost Rí lots of problems, but Grainne Moran and Jenny O'Neill both pointed to leave the Laois girls 0-4 to 0-2 ahead.

Colaiste Íosagáin took control of proceedings after that, however, with Ní Chiardha's shot for a point looping over Aimee Keane for a lucky goal. Niamh Ní Shíocháin then pointed a free before seeing a goal effort saved by Keane, with Ní Chiardha adding another point.

Portlaoise were struggling both at midfield and on their kickouts, but they finished the half strongly. Grainne Moran showed quick thinking to rifle a 14 yard free to the net, levelling the scores in the process, with a Fitzpatrick free seeing Chríost Rí 1-5 to 1-4 in front at the break.

The Laois side recognised they needed to alter things, in spite of holding the lead, and they made a few changes at the break. Midfielder Maeve Phelan started to drop deep to pick up short kick outs, and her strong running and distribution changed the game.

Coláiste Íosagáin's dominance in midfield was bypassed, and Chríost Rí reaped the rewards. The Dubs briefly drew level with a point from Sinéad De Bhuide, but the Chríost Rí response was clinical.

Erone Fitzpatrick's brilliant run ended with her setting Emma Lawlor through, and she lobbed the 'keeper for a brilliant goal. Moments later, Jenny O'Neill's good work get the ball to Alice Dunne, and she powered home from inside the penalty area for another fine goal.

Ní Chiardha hit back with a free for Colaiste Íosagáin, but they couldn't make any further inroads into a resolute and well-drilled Chríost Rí defence.

The final 25 minutes of play saw plenty of action, but just one more point for each side, and Scoil Chríost Rí claimed a well-deserved Leinster title.