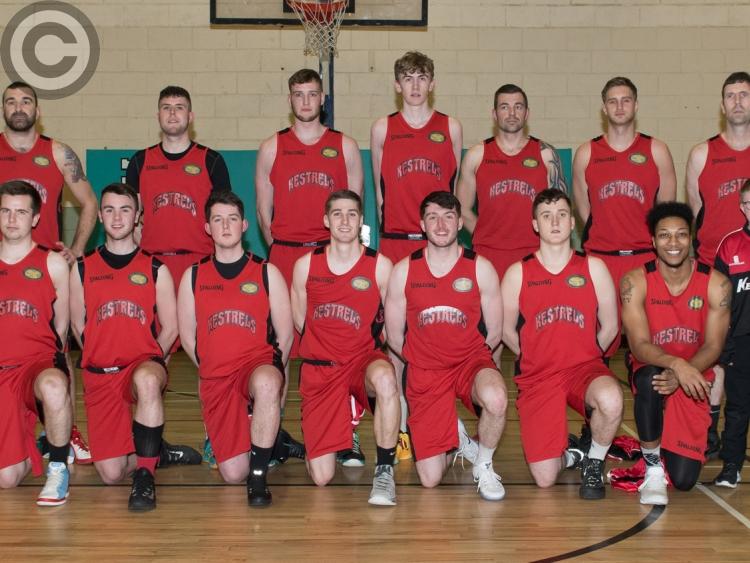 All eyes were on St Mary’s Hall on Friday evening as the battle for the title of Midland Cup champions took place. The local derby between Kestrels and Portlaoise Panthers was bound to be a tantalising event.
The game got off to an electrifying start with both teams going basket-for-basket in the first two offences. Kestrels Dan Debosz decided to make his presence known early in the game, putting away an early three-pointer that set the pace for the rest of the game.
Kestrels played an intense man-to-man defence which caused problems for the Panthers offence. Kestrels work rate under the boards, with numerous defensive rebounds, made it almost impossible to stop their fast break as they showed superiority from the transition.
Aaron Whelan and Mantas Vilimas were converting these opportunities with fifteen points between them, leaving the score 14-26 to Kestrels at the end of the first quarter.
The second quarter saw the introduction of James Byrne for Vilimas. Byrne dominated in the centre both defensively and in offence assisted by slick passing from Whelan and Teasley.
Chris Teasley and Glen Mitchell showed their athleticism running the floor and converting some great lay-ups and pull-up jumpers. Mitchell put in a great block to continue the intense pressure on the Panthers offence, leaving it 26-48 in favour of Kestrels going into half time.
The third quarter got off to a slow start, but once again the Kestrels ‘bigs’ went to work, dominating under the boards and allowing the guards to run the floor and making every opportunity count. This left the score 43-67 going into the last quarter.
James Gormley and Dylan Dunne made their cup final debuts and did not disappoint. Remaining cool and composed, these young men did not let the occasion get to them. Dunne had no fear as he attacked the Panthers defence, drawing a shooting foul and converting both free throws. Gormley too, growing in confidence and skill each game, put six points on the board, one from an offensive rebound and a base line drive.
To finish the game in style Gormley pulled of a fantastic 360 turn to convert the final score for the dominant Kestrels side.
Aaron Whelan's tremendous work ethic throughout the game landed him with the MVP, as Kestrels claimed the Midlands Cup title for the third year running.