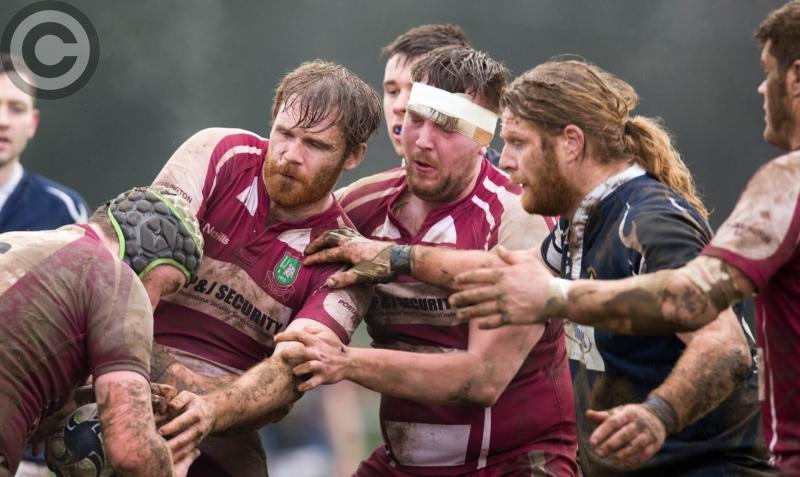 Conor Dunne feeds this ball back for Portarlington against Portlaoise in the Towns Cup at Lea Road. Picture: Alf Harvey/HRPhoto.ie

Portlaoise lived up to their pre-game billing as favourites for this all-Laois Towns Cup clash, as they saw off Portarlington at Lea Road on Sunday.

Portlaoise were the sharper of the two teams in the early stages of this one, and it looked pretty ominous for Portarlington in the first half. The away side were awarded a penalty early on after Portarlington were caught offside, and Portlaoise’s star man, Logan Nicholson, made no mistake from ten yards out.

The New-Zealand born native would end up accounting for eighteen of his sides twenty three points, the out-half a crucial reason why Portlaoise would remain in control for most of the game. After a rocky start, Portarlington looked to have steadied the ship. In the opening twenty minutes of the first half Portarlington dominated possession, but couldn’t make much use of it.

They were ultimately made to pay, as a slack pass from Ross Young meant Logan Nicholson would intercept and score the first try of the game. He would follow his try with a successful conversion, as he gave his side a ten point lead nearing the end of this first half.

Portlaoise were awarded a penalty in the closing minutes of the first half, but Nicholson failed to convert. As the half time whistle was blown, Portlaoise went in with a ten point lead. Despite Portarlington sharing a large part of the possession, they had failed to carve out any opportunities.

If Portarlington were to find a way back into this game, they needed to be the first to score in the second half. Anavil Storey went out of play ten yards out from Portlaoise’s try line, and Portlaoise were given the line out.

Portarlington’s Robert Pigott turned over possession from the line out, and Portarlington moved closer to Portlaoise’s try line. Quick play from Storey and Fintan Murphy meant first half substitute and prop forward Cathal Bannon went through the middle and put five between the teams. Eugene Nolan would fail to kick the conversion, and the gap remained five.

This seemed to be the waking up call Portlaoise needed, as they noticeably went up a gear. In the 46th minute, Portlaoise were awarded a penalty, and Nicholson kept his composure to restore the gap to eight. Portlaoise had fifteen men on the field once again, as wing forward Ross Cooper returned from a sin bin from the first half.

Portarlington managed to keep within touching distance of the visitors, as they were awarded a penalty which was converted by Stephen Mulhall. However, this was as close as they would get to Portlaoise, as the quality began to shine through for the away side.

A long, cross field kick from Eugene Hearns was brilliantly caught by Nicholson, who played an incisive give and go with Gavin Thompson and went over the try line.

This score knocked the wind out of the sails of Portarlington, as fatigue started to set in. Portlaoise went over once again, this time through Eoghan Feane. They missed the conversion, but it mattered little, as they had gained a strong lead.

Portarlinton, to their credit, gave the crowd something to cheer about with a try and conversion from Richard Dowling and Stephen Mulhall at the very end. Portlaoise would, however, march on into the next round of the Provincial Towns Cup, with a home draw against Skerries up next.